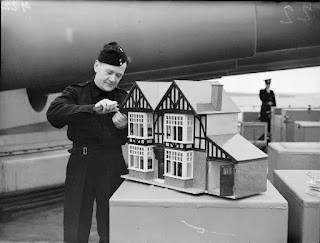 I found this photo of a Royal Marine making a dolls house for his children at Christmas during  WWII. It's a beautiful house, typical of the period and was rather touched, so thought I'd share it with you. The photo is from a collection at the Imperial War Museum, and comes with the following caption.

Royal Marine J Lynch of Newport building a dolls house, complete with furniture, 1943. In the weeks before Christmas, men and officers in the Royal Navy often put their practical skills to use in making presents for their families at home. This photograph shows Marine Lynch on a battleship putting the finishing touches to a large dolls house, complete with furniture.