After the end of the English Civil War and the execution of King Charles I, England became a republic, known as the Commonwealth of England, Scotland and Ireland. Originally it was governed by what was known as the Rump Parliament, but in 1653 Cromwell forcefully dismissed the Rump Parliament, and a Protectorate was established, with Cromwell given lifelong leadership as The Lord Protector, with a ceremony held in Westminster Hall. King Edward’s Chair, the throne created in 1296 for King Edward I, in which nearly all monarchs have sat for their coronations since 1308, was taken from Westminster Abbey to Westminster Hall for Cromwell’s ceremony (one of only three times the throne has been removed from Westminster abbey).

Before this, in 1649, the Parliamentarians were worried by the potential threat posed by an alliance signed between the Royalists and Irish Confederate Catholics. Cromwell was sent to Ireland to crush this alliance. Cromwell was deeply opposed to the Catholic Church, citing the persecution of Protestants in Europe, and the Irish Uprising of 1641, where an originally peaceful protest led to bloodshed and massacre of many English and Scottish Protestant settlers in Ireland, who had set up homes on land originally taken from the Irish.


If Cromwell was really opposed to religious persecution of Protestants, he certainly didn’t spare the Irish Catholics. After laying siege to the towns of Drogheda and Wexford, his soldiers attacked the towns and massacred thousands of people, not just Royalist and Irish troops, but also civilians and priests. Cromwell declared the killings as justified and not one of his soldiers faced disciplinary action.

Cromwell withdrew to England in 1650, after hearing that Prince Charles (Charles I’s son) had landed in Scotland, but the Parliamentary conquest continued in Ireland for a further 3 years. After the conquest practising the Catholic faith in public was banned across Ireland, many Catholic priests were arrested and killed and Catholic-owned land was confiscated, leading to mass evictions and deportations.

An anti-Catholic agenda was one of the driving forces of Puritanism. The Puritans had been around in one form or another since the reign of Elizabeth I (it was a cargo of Puritans that set of for America in 1620 on board the Mayflower), but it was during the Civil War and the Commonwealth that they really got to grips in England. They were named Puritans because they believed that the Church of England still tolerated ‘popish’ practises and wished to cleanse the church of all things associated with the Catholic Church. English churches, already transformed by Henry VIII, were vandalised, to remove any traces of Catholicism, statues of Mary or saints lost their heads, screens were torn down and windows smashed.

Life in England, under the Puritan thumb, must have been very dull. Women were required to cover their heads and wear modest clothes and were banned from wearing any kind of makeup. Dancing, feasts and gambling were all outlawed. Theatres were closed down, sports events such as horse racing, bowling and cock-fighting banned. Alehouses just about survived, but were regularly inspected to make sure that no one was doing anything they shouldn’t! An act was passed called the Swearing and Cursing Act, where people could be fined if heard uttering a profanity. And, perhaps most famously of all, the celebration of Christmas was made illegal! It seems that many people either flouted these laws or ignored them altogether, the wealthy just paying the fines incurred. With insufficient manpower, the rules were difficult to enforce, but the theatres and sports grounds remained closed until the Restoration.

Few new public buildings were erected during the Commonwealth in England. There were a couple of churches built, I know of one in Yorkshire and the tower of All Hallows by the Tower in London had its tower rebuilt after it was badly damaged when gun powder stored in the churchyard exploded. Repairs were made to some other buildings damaged by the Civil War, or by fire such as Wilton House, where Inigo Jones worked with John Webb, to create his Single and Double Cube Rooms, mentioned in my earlier post. In 1654 John Webb added a portico to The Vyne, originally a Tudor house in Hampshire. This was the very first temple portico to be added to a private house in England, the first of many!! Webb also built the classical Lamport Hall in Northamptonshire in 1665. 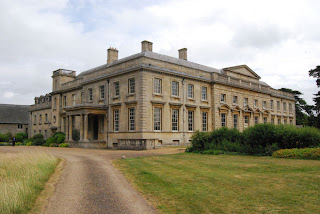 Another house built during the Commonwealth in 1650 was Coleshill House in Berkshire by Sir Roger Pratt a gentleman architect, for his cousin George. 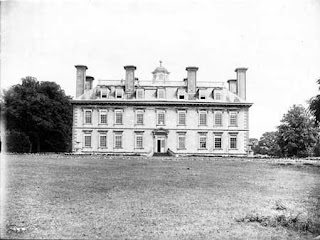 Coleshill House would prove to be very influential in house designs later in the seventeenth century. It was one of the first houses in England to be built with a double-pile layout of rooms; where the house is two rooms deep, separated by a corridor running the full width of the house. It is said that it was Sir Roger Pratt himself who came up with the term double-pile to describe this type of floor plan. 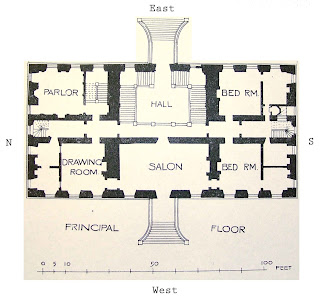 It is also, perhaps, one of the first houses to feature Baroque elements. Pratt had spent time in France, Italy and the Low Countries during the civil war, and bought back this newly emerging style with him. He built an Italian style staircase in the Grand Hall, an unusual feature in itself and for its position, at this time in England, the stair case swept around both sides of the hall, meeting a gallery at the top. The banisters, door cases and fireplaces were all beautifully decorated and the ceilings were similar to those introduced by Inigo Jones at the Banqueting House at Whitehall. On the roof there were large dormer windows with alternating arched and pointed pediments above them, and the roof was capped by a baroque style cupola. 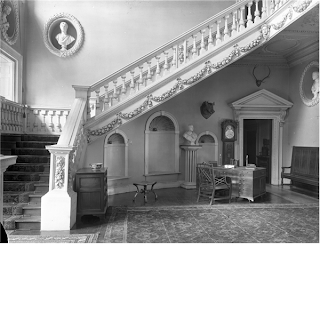 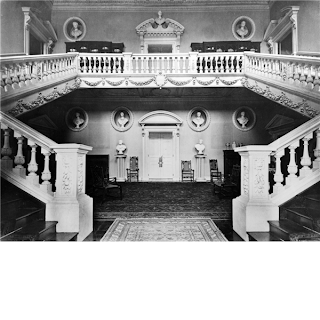 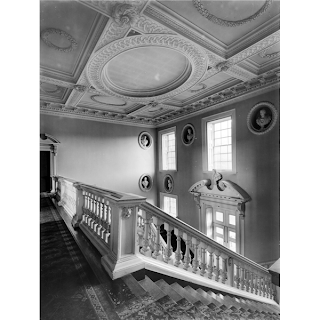 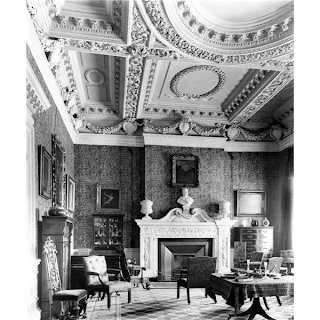 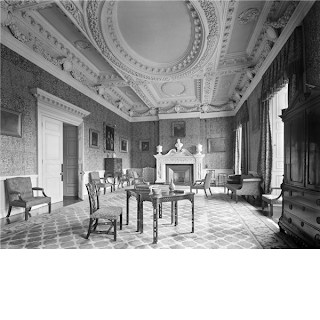 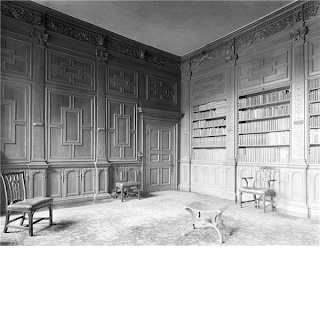 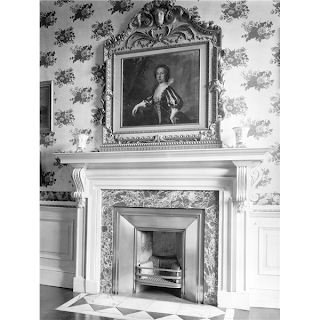 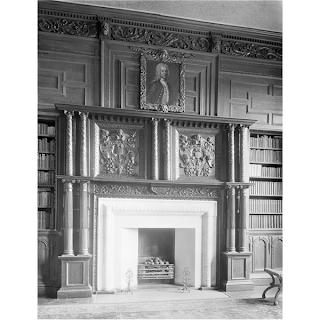 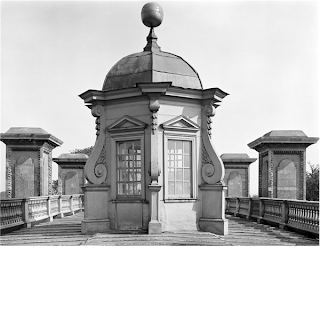 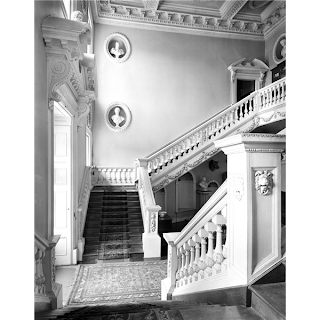 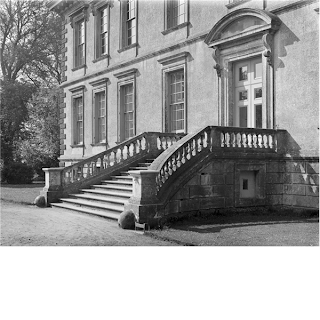 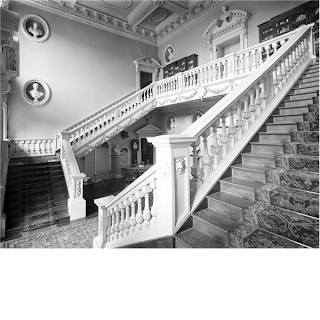 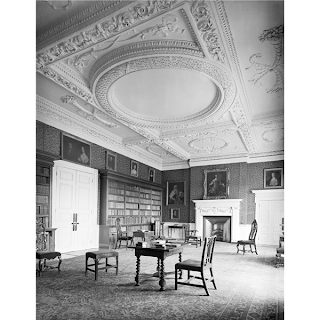 Shots of Coleshill taken from an artical in Country Life

Sadly, in 1952, during some renovation work, Coleshill House caught fire, and was very badly damaged. If the fire had happend today the house would undoubtedly have been saved and restored, much the same as happened at Uppark in Sussex and Windsor Castle, but back in the 1950’s the decision was taken to demolish what was left of the house, and now the grounds are owned by the National Trust. It was, I think, a very tragic loss!

Oliver Cromwell died on 3 September 1658. His body was to lie-in-state at Somerset House for a couple of months (he was actually displayed standing up, wearing purple robes, a crown, orb and sceptre as if a king!) and was given a state funeral in November that same year. His body was sealed into a tomb at Westminster Abbey.

After Cromwell’s death, his son Richard took over the leadership of the country. The population had grown tired of the more or less constant battles and the strict rules and fines. There had been several outbreaks of plague and other diseases. The winter of 1657-58 had been extremely harsh; and just days before Cromwell’s death a heavy storm had passed over England uprooting trees and ripping off roofs and church steeples. For a population still largely superstitious these were viewed as ill omens. Whether this had any impact on Richard Cromwell’s abilities to lead his country is not clear, but he was certainly not considered up to the job. In April 1659 a petition of 20,000 signatures was presented to Richard Cromwell, calling for a return of the Rump Parliament. Cromwell was made to understand that if he refused then military action would be taken against him. He abdicated, and was ordered to depart from Whitehall. For the rest of that year the Commonwealth was left sailing in the wind, no one had any real control of the country, and eventually in 1660 Charles was asked to return to England, to become its new King, where he became Charles II in what became known as The Restoration.

This isn’t quite the end of the story for Old Cromwell. On the Orders of Charles II, his body was exhumed from Westminster Abbey and put on trail for treason and regicide, naturally he was found guilty and his remains were symbolically hanged at the Tyburn gallows. Afterwards his head was stuck on a 20 foot pole above Westminster Hall, where it remained until it was lost in a storm in 1685.