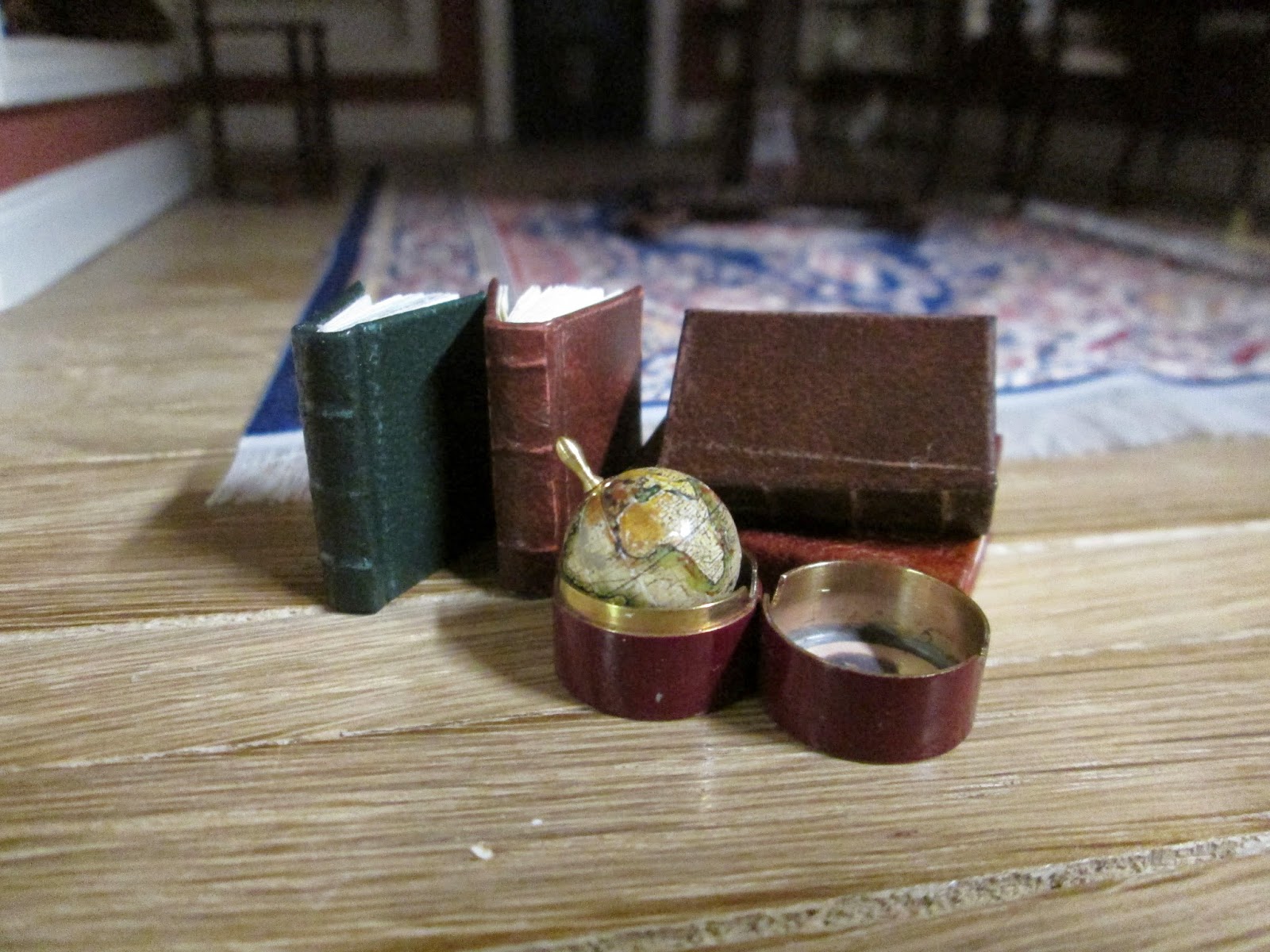 I went to the Miniatura in Birmingham back in late March, it was good to get there again as I missed both shows last year. It's nice to meet with some of the miniaturists and crafts people at the shows and to pick up a few tips. 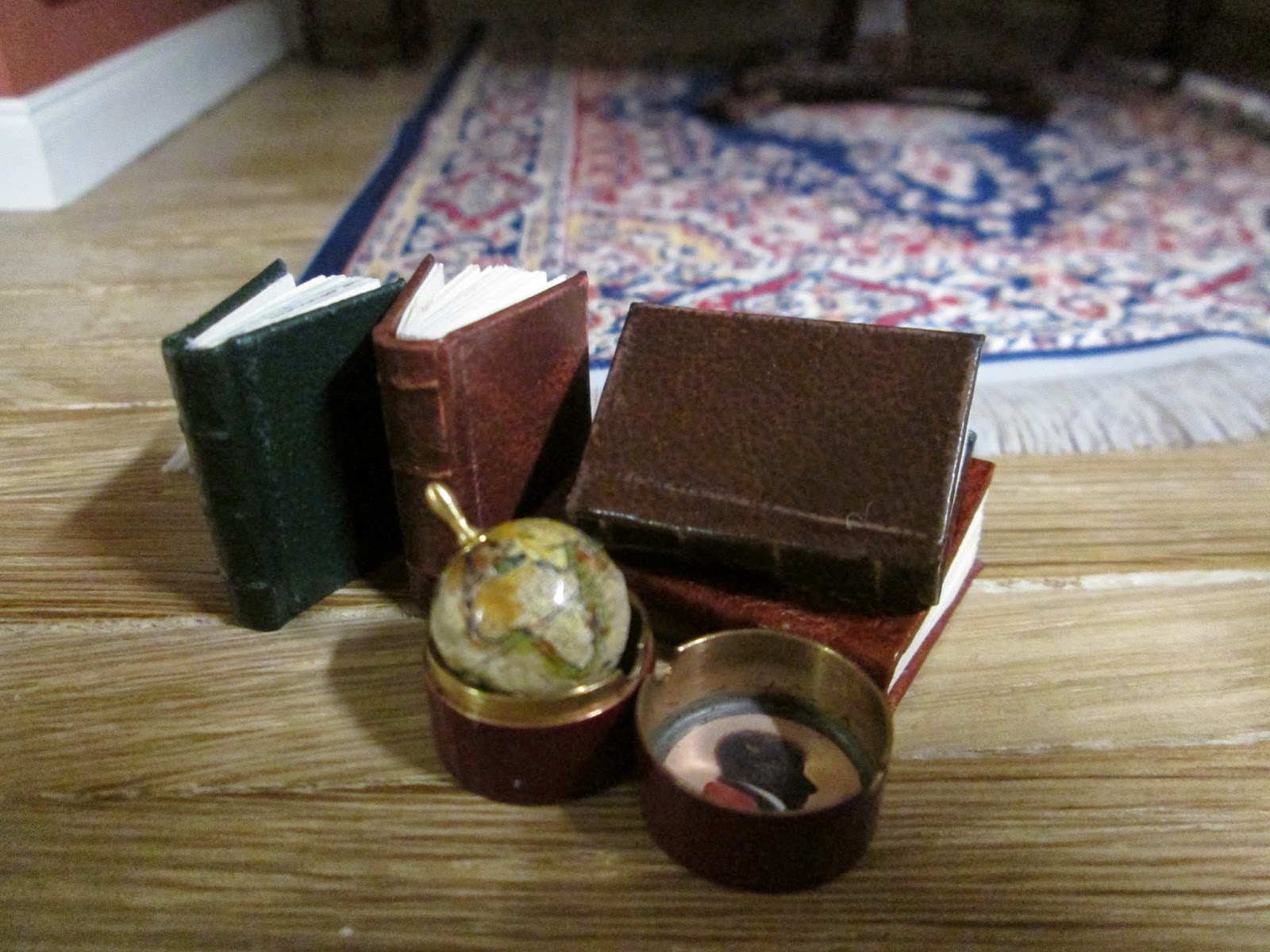 As always I had a great time looking at the huge variety of miniatures on sale, and it is satisfying to meet the people who made them and to look at the objects before buying. I bought more leather bound books from Ellie de Lacy (www.elliedelacy.co.uk), my book cases are taking FOREVER to fill!! ;) I also bought a very handsome portable globe in a case from Truly Scrumptious (www.trulyscrumptiousonline.com), which would have been a must for any wealthy gentleman in the 18th century. 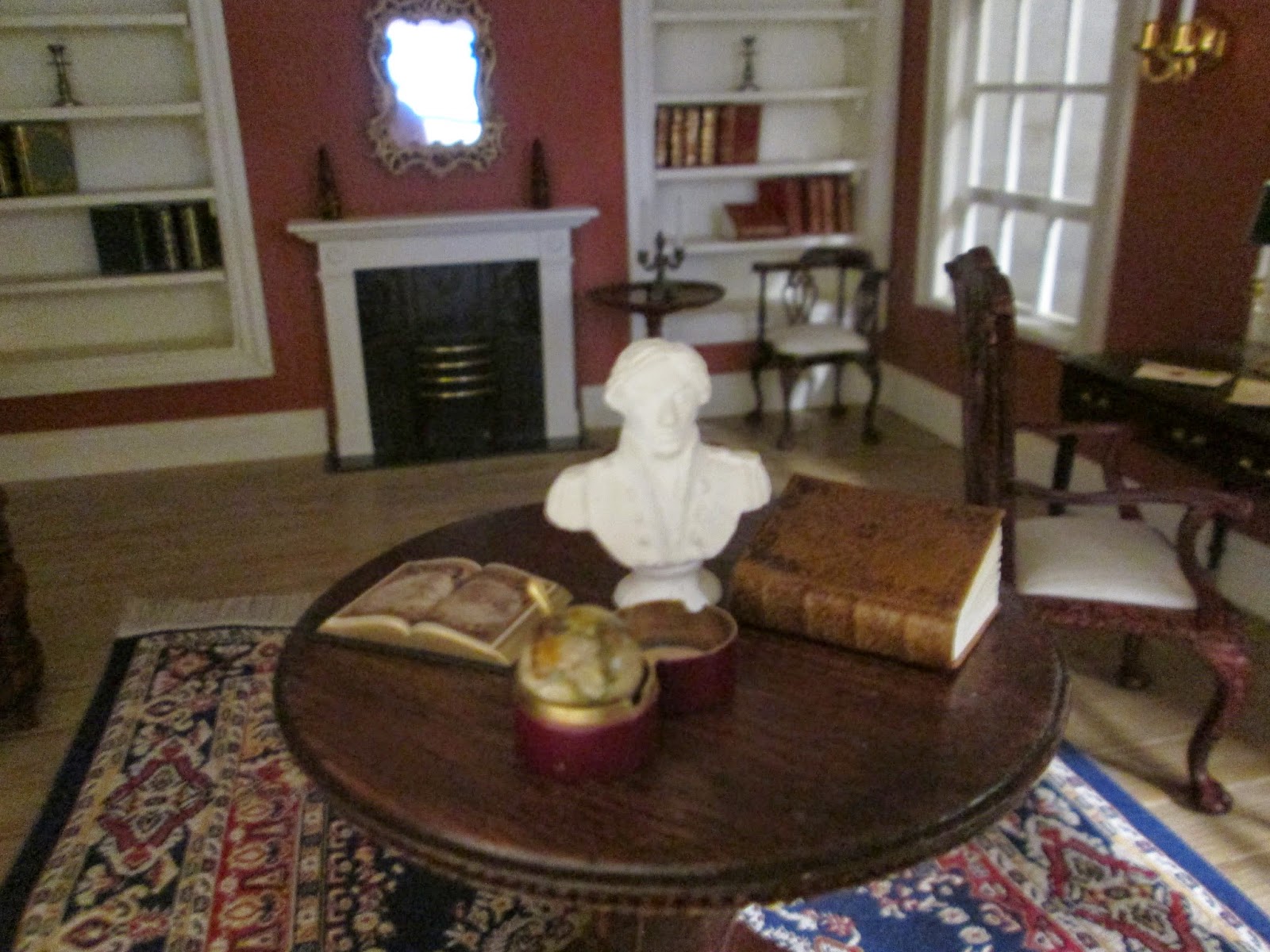 These have now been settled down in the Library. Just look at those empty shelves!! 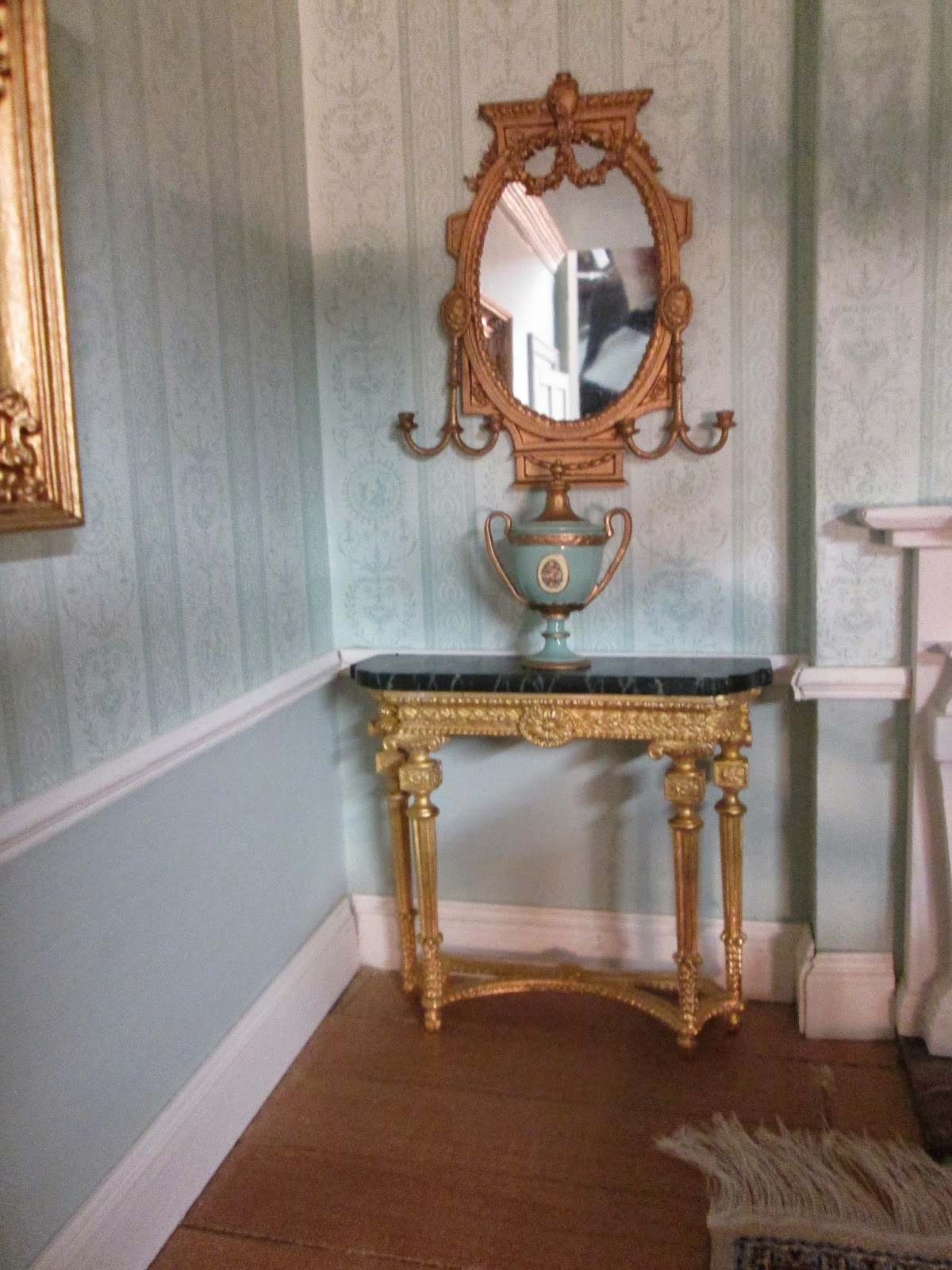 I have been thinking about replacing the serpentine tables in the Drawing Room for sometime, They were miniature white wood kits that weren't finished very well by me. They looked ok, and are still being used in the house, but I have finally been able to replace them in the Drawing Room. 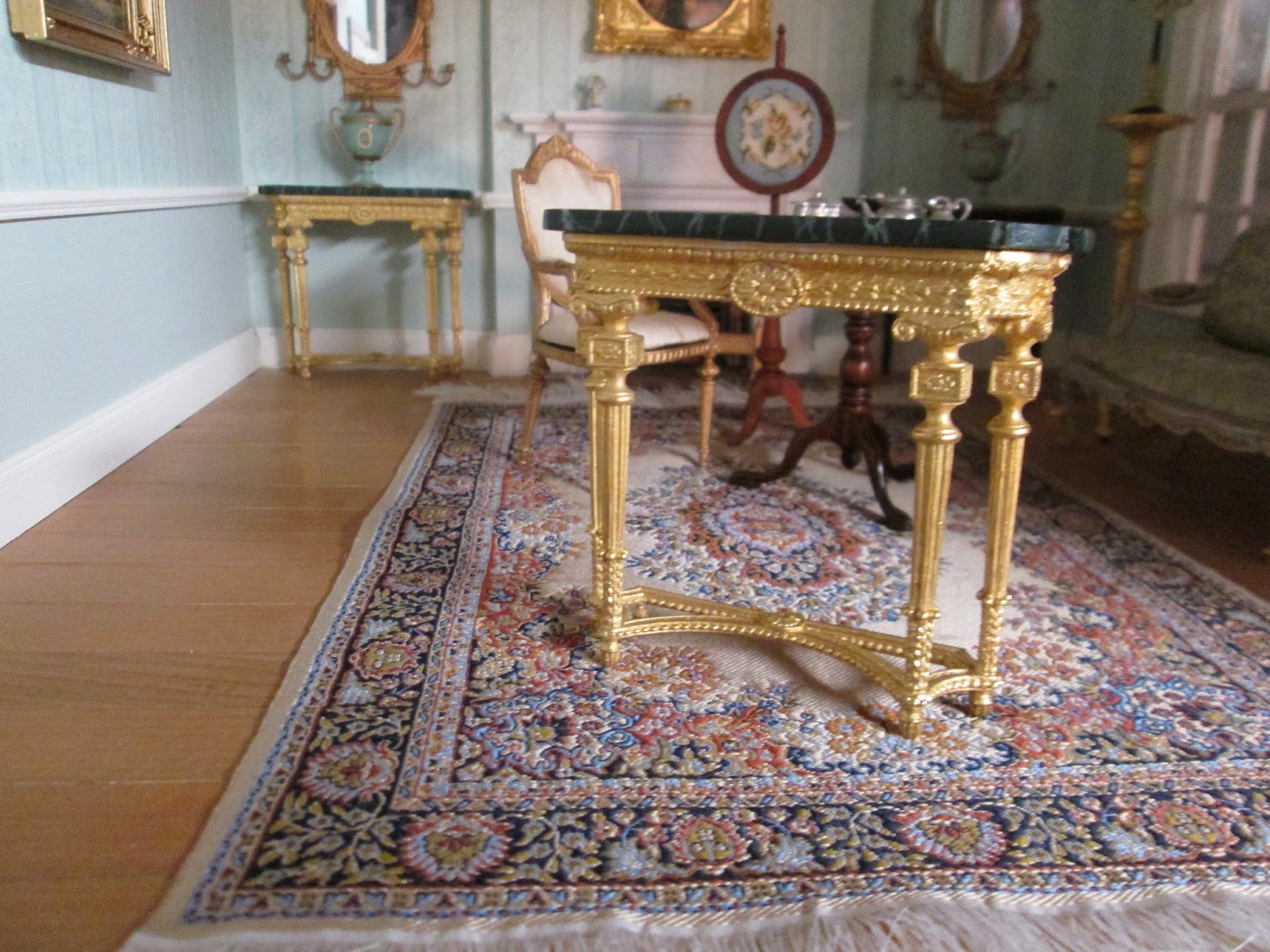 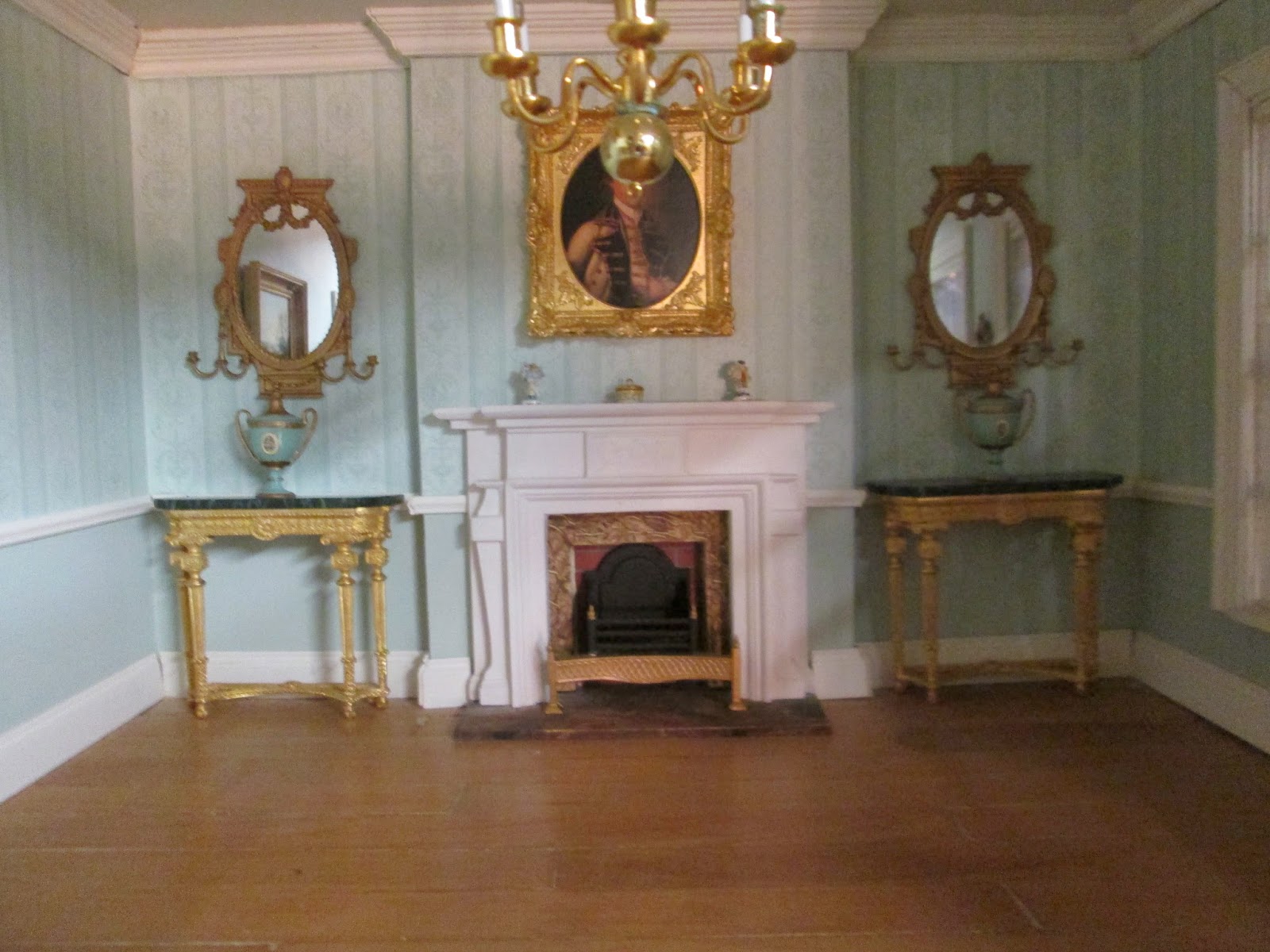 I needed a pair, which was a bit costly, but I wanted to be sure that the tables matched, and this meant buying them together rather than waiting and only buying one at a time. That match the  Adam-esque style I have aimed for in this room, and the gilt finish picks up on other gilt details in this room. 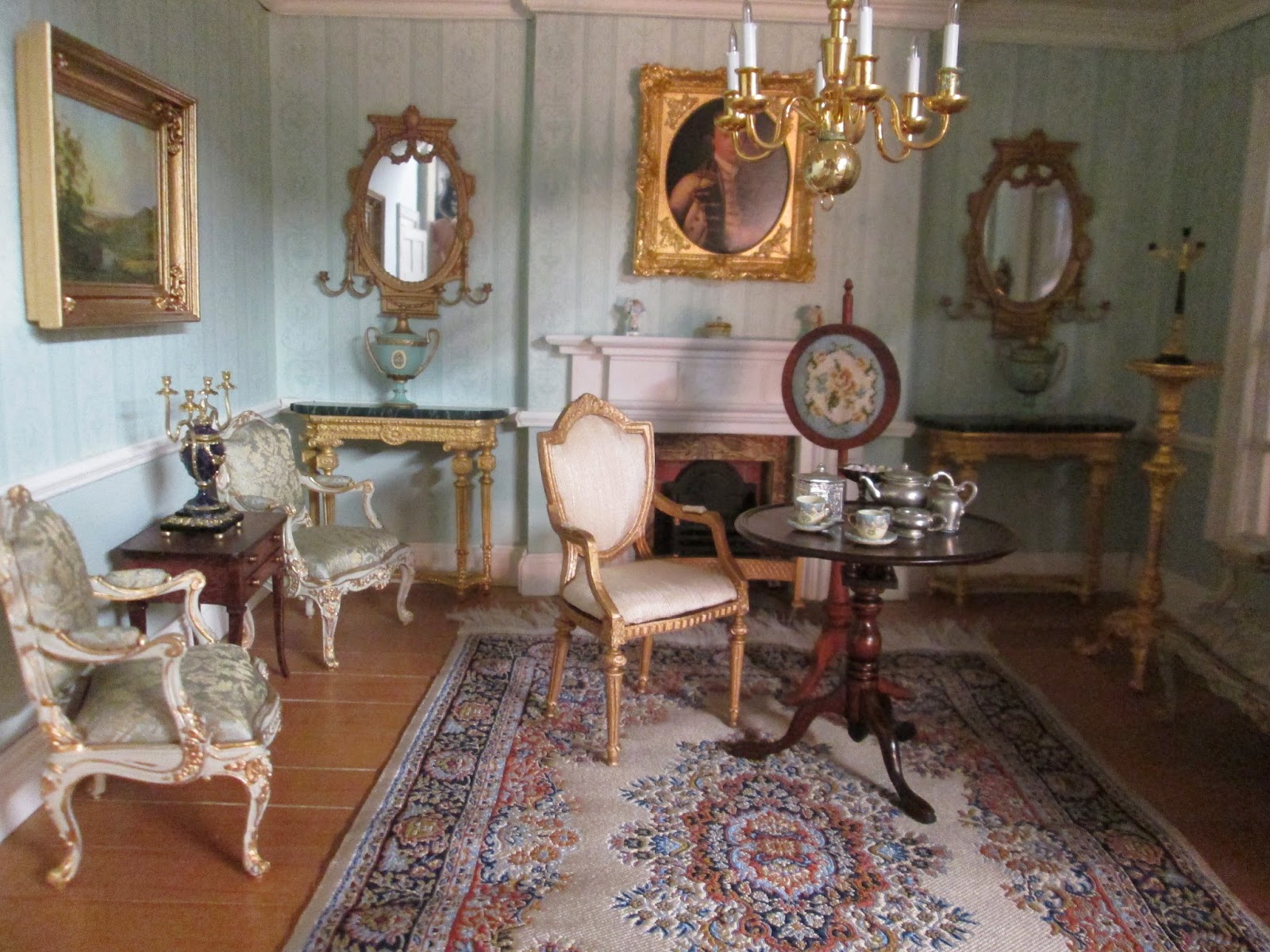 And here is the room with all the other furniture back in position. I am thinking of making a rug for this room from a pattern I have found in a book, but know it will be a HUGE amount of work!! I already have the canvas and silk thread needed but it will take a very long time, if I ever get it started,  before that there are curtains to make!! Needle and thread! I can already feel a cold sweat starting at the mention of those words!! ;)

I bought a few other things, which are in the Swan Inn, and I will do a post about them soon, I need to get some good pictures of them first!

Lego Corner Café; My Own Version

For several years now I have been collecting the LEGO modular street series, but I missed a few of the first sets when they were launched, and they have since been discontinued. The first set in the series was the Corner Café, which I well remember admiring several times in the LEGO shop, but was never able to afford.


The original Corner Café sets now sell on ebay for huge sums of money, I have seen an unboxed one selling for over £2500.00!! and built sets sell for about £500. This is clearly crazy as the bricks are worth nothing like that sort of money, and I though I could probably buy all the bricks to build it directly from LEGO Pick a Brick, at a much lower cost. Fortunately, I do happen to have a few LEGO bricks already, so this wasn't really necessary.

Recently I discovered that it is possible to download copies of all LEGO sets launched since 2002 from their LEGO website. This is FREE!!

My memories of the Café set were dimmed by the passing of time and the quality of more recent sets, I have to say that I was slightly disappointed when I saw the Café set in print. For example, there was absolutely no interior detail apart from a staircase. the cafe had seats and tables outside, but none inside, no counter, and no coffee machine! the hotel (above the café) lacked rooms, beds or reception!

This clearly would not do! I was also disappointed with the first floor. It just didn't look good to me. Fortunately, having the building instructions for the original meant that I could keep all the elements of the building I liked, alter the bits I didn't and make improvements inside.


Now, I have probably got a good couple of hundred thousand Lego bricks, but even with this huge stash to choose from there were certain bricks I didn't have, or certain colours that were not available. I could buy some of the extra bricks I needed from Lego's Pick a Brick service online, and much of the roof was done this way, albeit in a different colour. However, I thought it would be fun to use as many of my own bricks as possible before buying any more bricks from Lego.

The result is what you see posted here, some parts of the building are identical to the original, some are a different colour, but are built in the same way as the original, and some are completely different.

I had a great deal of fun building this set, sometimes it took forever to find all the bricks I needed, and puzzle how to build in alternative ways whilst keeping the spirit of the original.

I even created a hotel lobby with reception desk in the limited space available by pushing the stair case back into the rear of the building, instead of started just inside the doorway. It comes complete with groovy 'corporate' carpet!