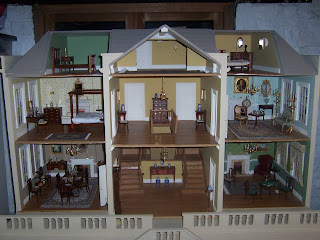 Well, I have shown you just about all there is to see in the Georgian house now, until I get around to making curtains etc, and add more furniture to the rooms. But I realised that I hadn't posted a picture of the house with the front panels removed, so I have attached the photo above!
Posted by Andy at 20:17 29 comments:

There's Something in the Attic! 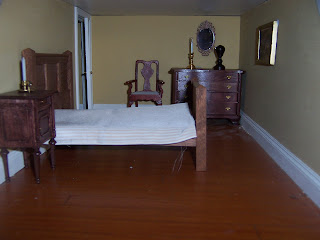 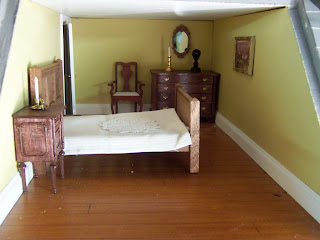 The attic rooms are the least finished rooms in my Georgian dollshouse. The two smaller rooms made suitable bedrooms, and I had to decide who would sleep in them. Attic rooms, or garrets, were not always set aside for servant accommodation as is often thought. The children of a family might well have had rooms in the attic, and in some houses bachelor guests would have been given rooms on the attic floor too, so I decided that the two small rooms would be set aside for bachelors. This meant I could use furniture that was a little more interesting than that which would have been found in rooms for servants. The room pictured above is the Yellow Bedroom. it is actually a different shade from that used in the hall, but probably looks similar in the photos. The bed is a McQueenie miniature kit, and the stripy fabric was something I picked up at a dolls house fair last year (unsurprisingly, as it requires sewing, it hasn't been used yet!) and thought would work well in this room, but the bed will need a mattress first! there's a serpentine chest in the corner of the room, made from a white wood kit.The other furniture is really just hand me downs from other rooms where it's no longer needed, but fits in quite well here. 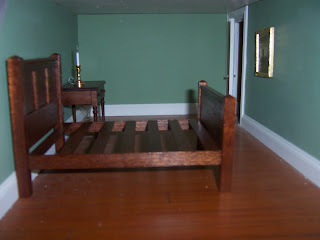 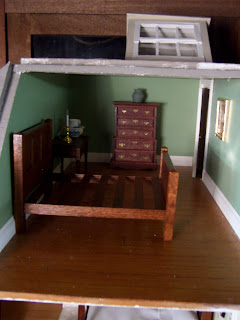 The Green Bedroom looks rather spartan at the moment, the bottom pic is older than the one above, so you can see I've used some of the things in other parts of the house, the tall chest is currently on the landing. There's not an awful lot else to tell you about this room as you can see! 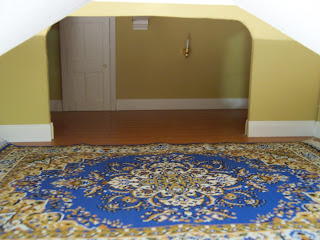 This is the last room in the Georgian house that I can show you. Yes, it's empty, I have no idea what to do with it and would like to ask you all what you think would be good in this room? I had thought of making a music room. The trouble is that is has an odd shape, the ceiling slopes in, as it forms the apex of the pediment at the front, and the arch way in the middle means that much of what is behind it can not be seen, or accessed easily. Mind you it is still a fair sized room even so. The rug was purchased by mail order, and is much brighter than I imagined, which is the trouble with mail order shopping! Not sure if the rug will stay for good. Please let me know your suggestions for this room!
Posted by Andy at 17:40 22 comments:

Smoke Gets in Your Eyes! 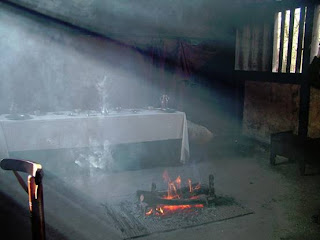 Whilst writing my blog on the history of halls, I was trying to imagine what living in a medieval hall would be like, one thing that struck me was how smokey it would have been. I found this picture on the web recently, taken at the Weald and Downland Open Air Museum, which has rescued several old English buildings from destruction. They have recreated a medieval hall, and that's what you can see above. Thought it was a suitably smokey image for Guy Fawkes Night!! (I don't know how that lived with all that smoke!!)
Posted by Andy at 20:28 6 comments:

This post has largely been inspired by Simon (Miniature Enthusiast) who suggested looking into the history of stair cases through the years. I've had to do a little bit of research on this one, and it's difficult to know where to start in the history of stairs, as steps in themselves have been around for thousands of years. I have decided to focus on stairs in British homes (and some public buildings) following a similar chronology to my history of the hall.

In the early medieval period, if a house had an upper floor, it was likely to be used more for storage than living, and access was by ladder in many cases. some may have had rough wooden, or stone stairs depending on what was available locally, and what a person could afford.

As the separation between the house owner's family and his servants grew, and more private rooms were created, particularly the solar, on the first floor, stairs became more important and improvements were made in construction and materials used. A separate tower or projection from the original building may have been constructed to house these new staircases.

From the Elizabethan period onwards the newel post staircase, with its framed banisters, was becoming increasingly popular in the grand houses of the wealthy, and many of these newel posts had fine carved details on them too. they became yet another symbol of status and wealth.


One particularly beautiful and outstanding staircase built in the early part of the 17th century was the circular Tulip Staircase designed by Inigo Jones in the Queen's House at Greenwich. This building was one of the first  classical houses built in Britain and would have looked truly remarkable to people at the time.


As I mentioned in my previous blog, the staircase was often kept separate from the entrance hall in larger houses, as depicted here in a photo of Ham House in London, where you can just see the staircase through an archway beyond the hall.


By the end of the 17th century staircases had become a very important feature in the wealthy households, and had become highly decorated, not only with carvings but often with walls and ceilings painted in the theatrical Baroque style of the period.


The staircase progressed through out the 18th century, with the heavy newel posts and banisters disappearing to be replaced by delicate banisters, this was possible due both to improvements in construction techniques and new materials like iron.


The cantilevered staircase developed during the 18th century. Delicate staircases with little or no visible support, matched by decorative wrought iron balusters were perfect for the Age of Elegance!

By the Regency the cantilevered staircase was being bent and twisted into beautiful sweeping curves, and fine materials like marble were also much in evidence too. 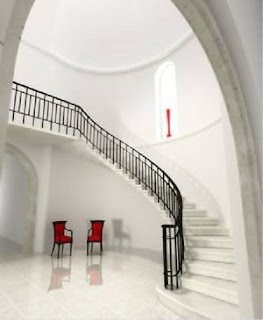 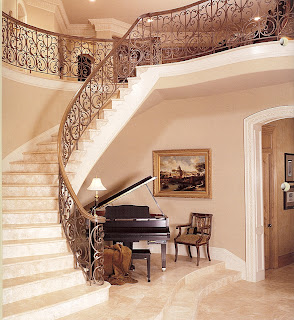 But not everyone followed the fashions of the 18th century, some tried to set their own trends, with some success too! Horace Walpole and William Beckford both used Gothick influences in their homes. Walpole at his home Strawberry Hill and Beckford at Fonthill Abbey. When Beckford was forced to sell his huge Gothick creation (part of which fell down shortly after due to bad construction techniques, and is now almost completely gone!) he moved to Bath, and at Lansdowne built a new, far smaller tower, in the Italianate style, a style, along the Gothic Revival, that would prove popular in the Victorian age.

The Victorians plundered almost all the historical styles of history in their buildings. Gothic revival linked Britain's heritage with Pugin's notions of 'true' religious building styles (in a nut shell; Gothic good, classical bad and to blame for all the evils and vice in society!! a slightly polemical viewpoint I think!!)


For the 20th century I am going to show you examples of two staircases. One designed by Charles Rennie MacKintosh, in an early example of art deco style (care should be taken when using the term art deco, it was coined not in the 1920's or 30's, but in the 1970's. The styles we associate with art deco were often referred to at the time as being 'in the modern style' or simply as modern(e)). The other staircase is from the De Le Warr Pavilion at Bexhill-on-Sea, in the truly streamlined modern style of the 1930's.

But what about the humble dwelling? what sort of staircase would they have had? Well, many cottages would have a staircase installed to the side of a fireplace, often hidden behind a door, giving it the appearance of a cupboard. Other houses would have simple wooden stairs built along a wall, much like what most houses have today. 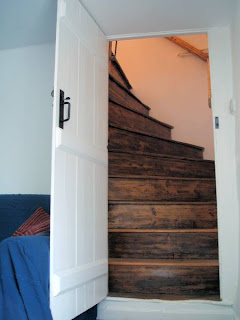