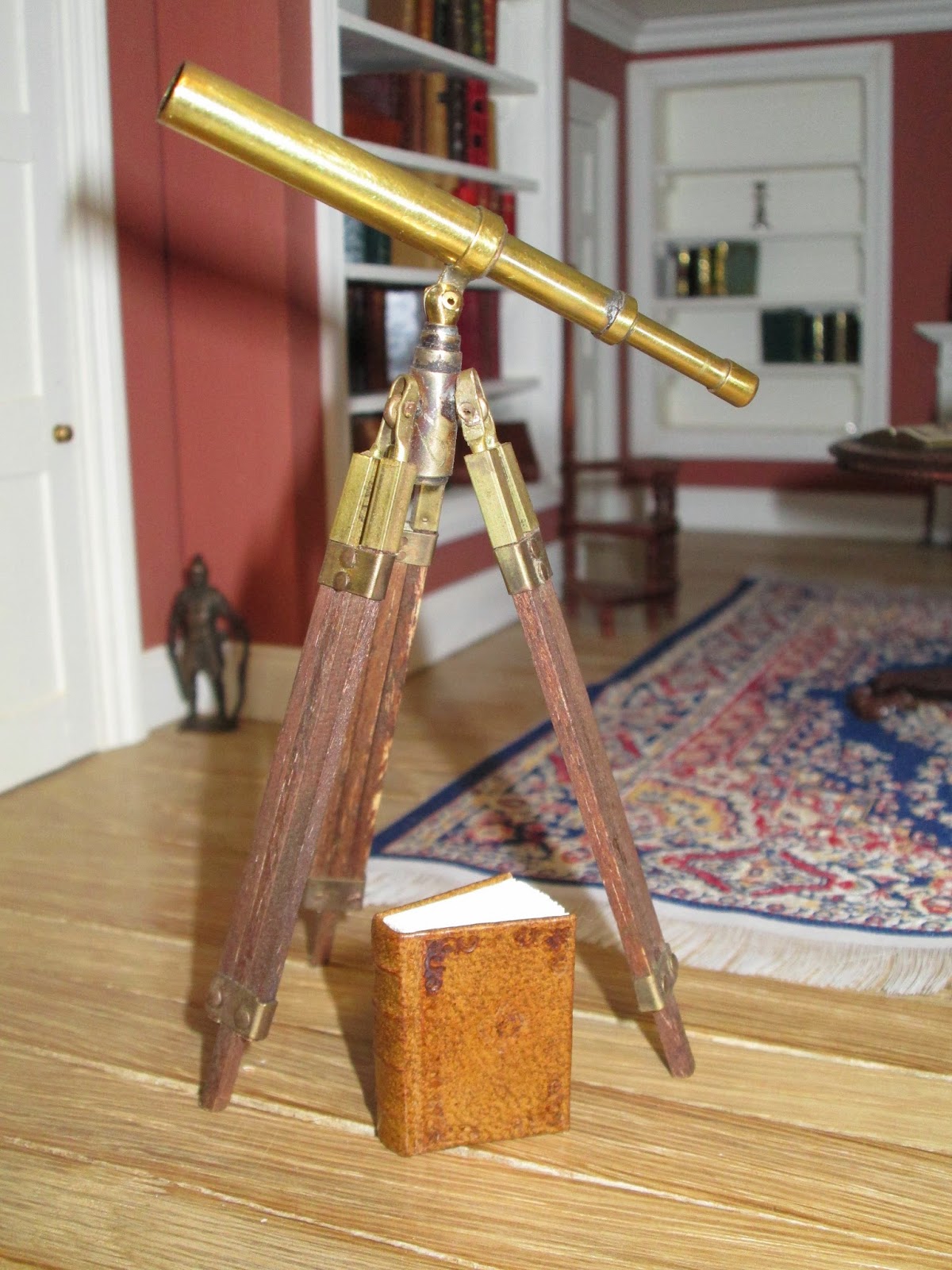 This is a post to try and catch up with the bits and pieces I have purchased, or been given as gifts over the summer. I haven't been to many dolls house fairs this year, and will miss the Autumn Miniatura in September too sadly. I did get to the Dolls' House Fair at Kensington back in May. I bought the telescope in the picture above, which is for the library in the Georgian house. I can't remember the name of the artist who made it though! 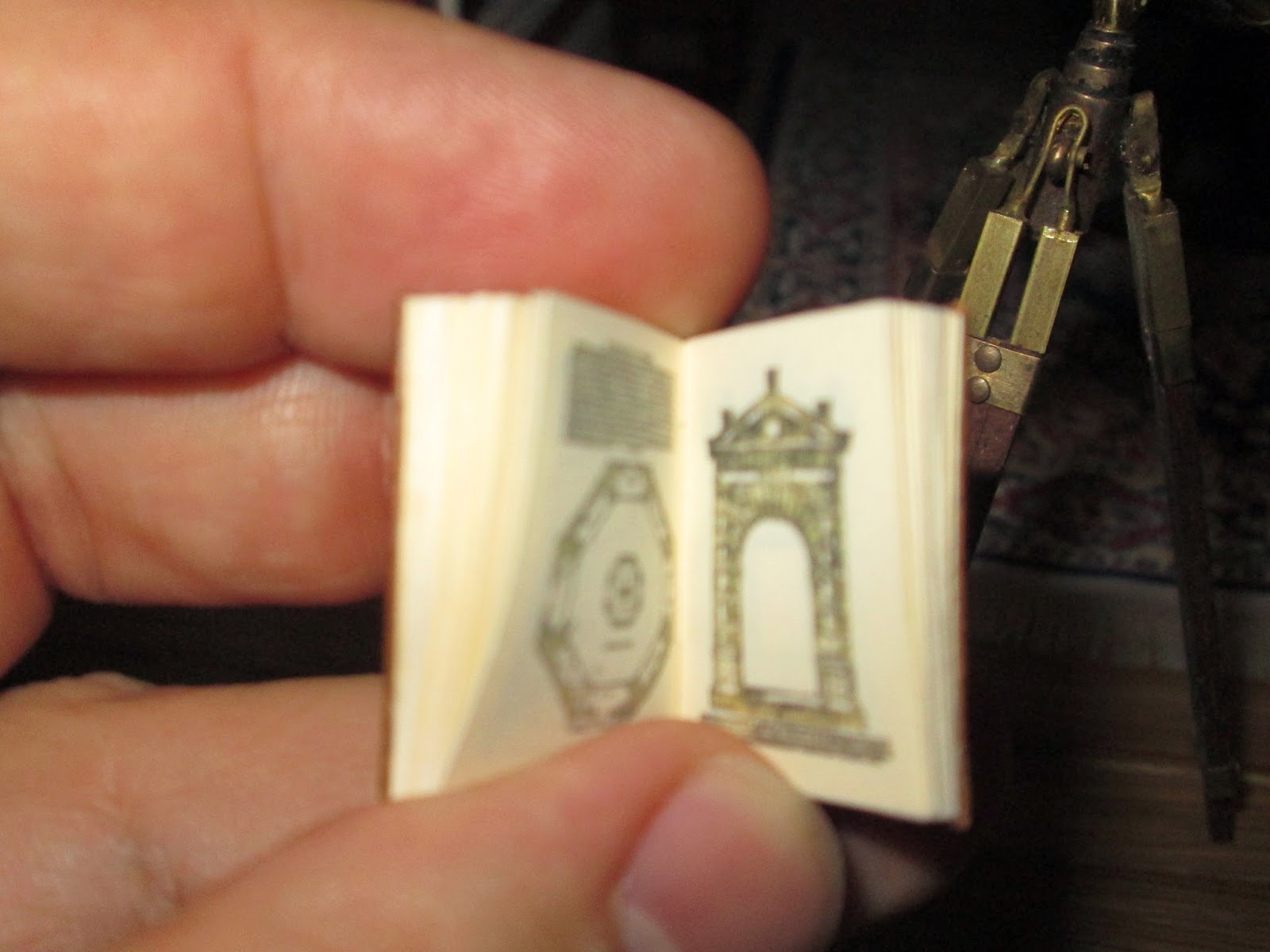 The little book below the telescope was a surprise gift from Ellie De Lacy! I had asked her at a previous show if she had any other books on architecture in her miniature collection, besides Colin Campbell's, and suggested Serlio's book on architecture would be a good one to do. And here it is in its miniature form! I was thrilled! the book is full of tiny architectural studies, a must-have book for any Georgian gentleman. See www.elliedelacy.co.uk for more of her fabulous miniature books, all handmade, with hand stitching and leather binding on many of them. 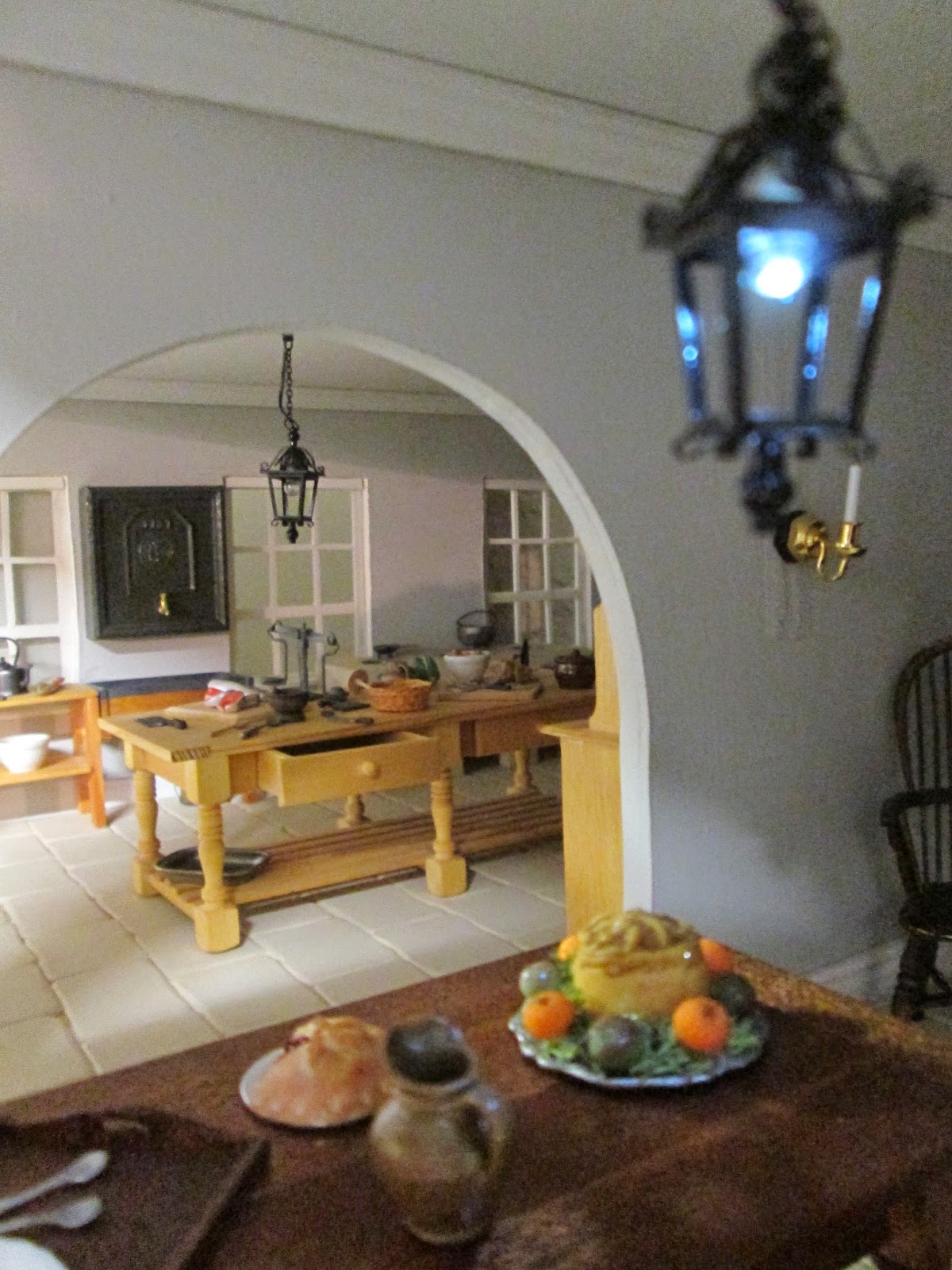 I finally sorted out some lighting for the servants' hall to match those in the kitchen. the battery operated lamp looks just the same, but without any of the fiddly wiring I thought I would have to do, however, it doesn't give out all that much light compared to the electrical lamps, something to bare in mind if you are planning to use battery powered lamps in any of your projects. 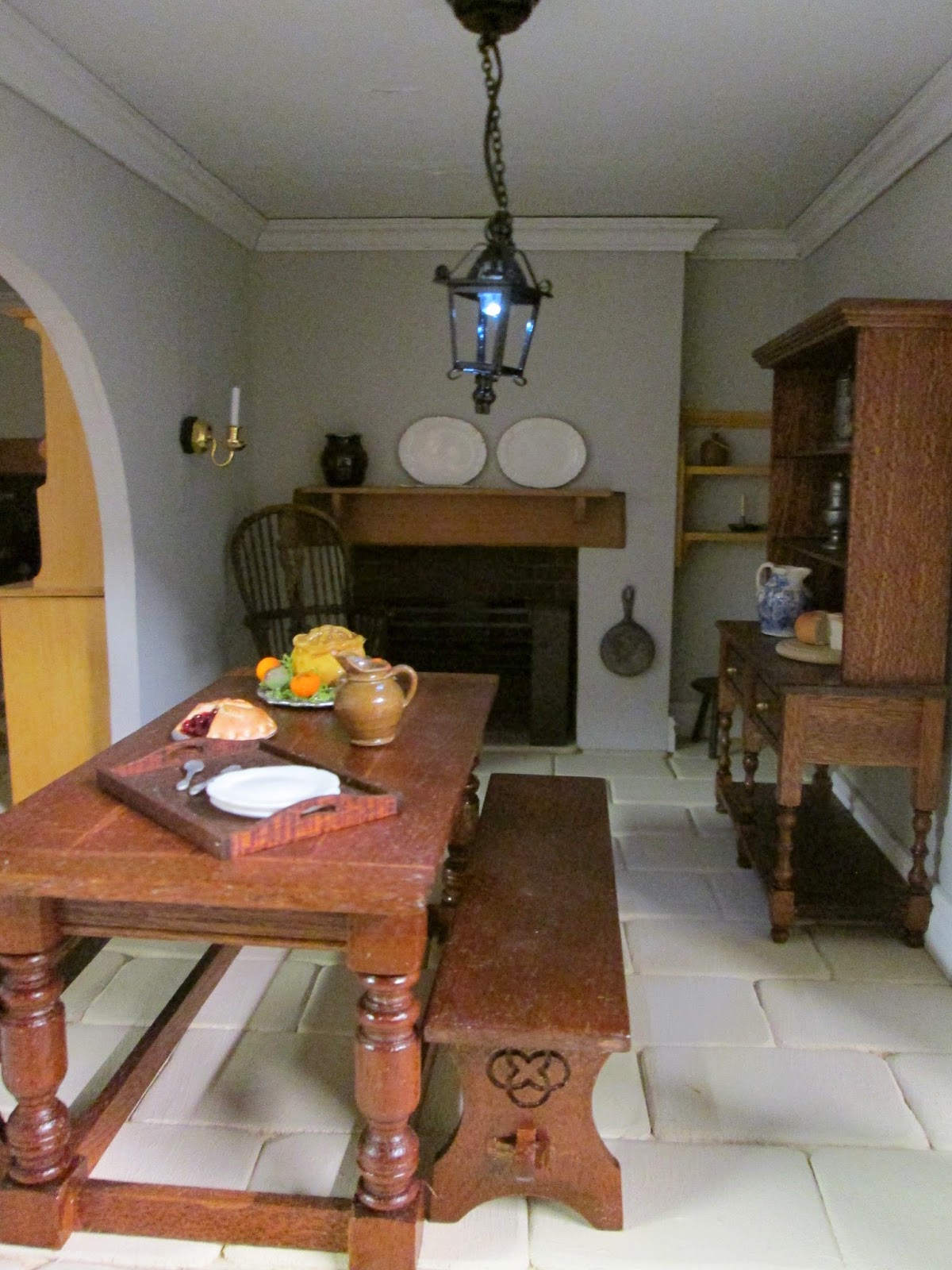 Some other views of the new lamp and a comparison with those in the kitchen. 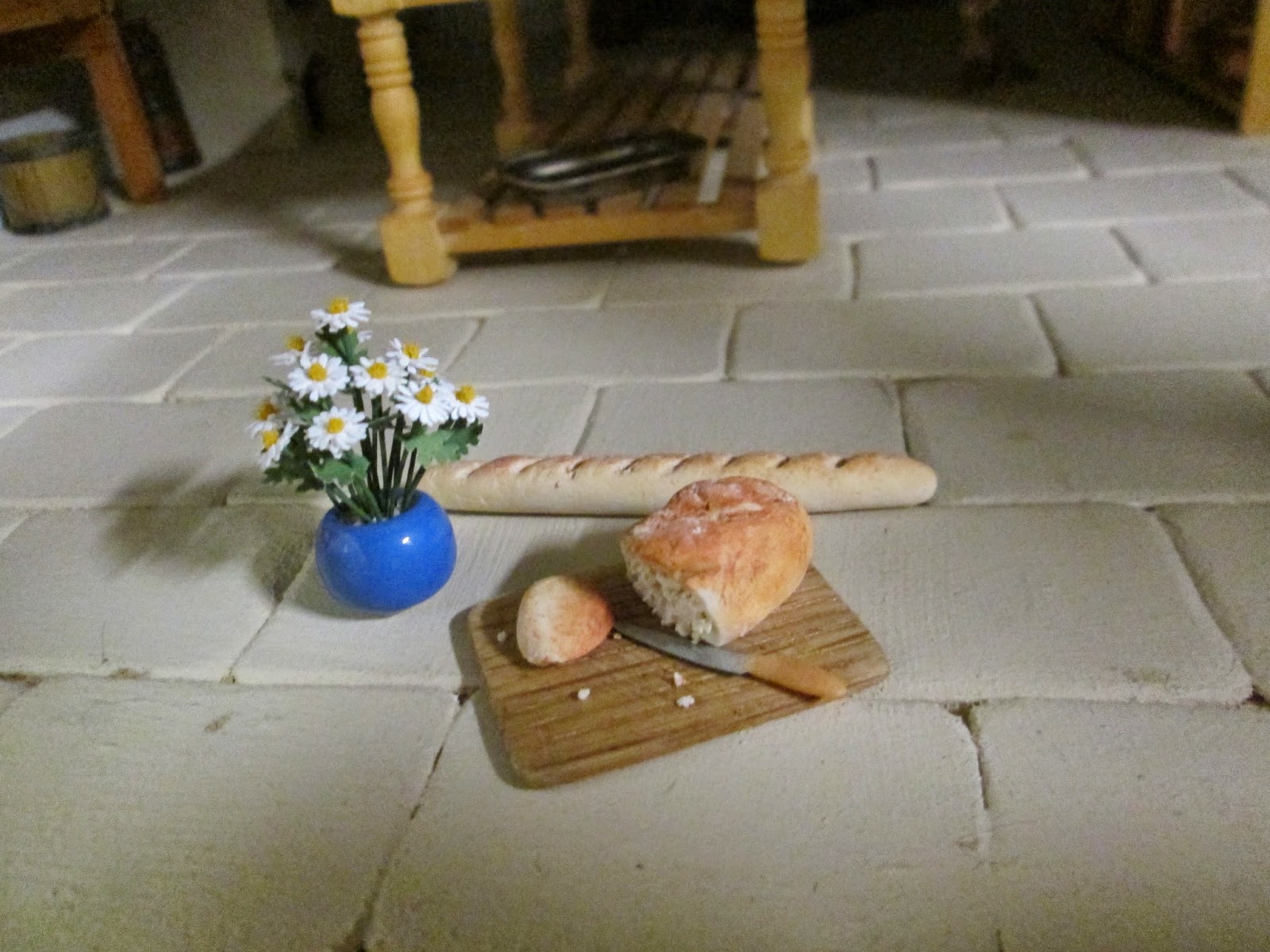 In July David and I went to Hampton Court Palace, where we met up with Fi and her family, on holiday from Australia, we had a lovely day, Hampton Court Palace is an amazing place to visit, full of history, with beautiful state rooms and even actors dressed as former kings, queens and courtiers performing in the palace!

Fi gave me some loaves of bread she had made herself, she made the chopping board too, complete with knife marks and bread crumbs! She also gave us the pot of daisies she had bought at a miniatures fair in Australia.

Thanks once again Fi! Hope you enjoyed the rest of your holiday in Europe. 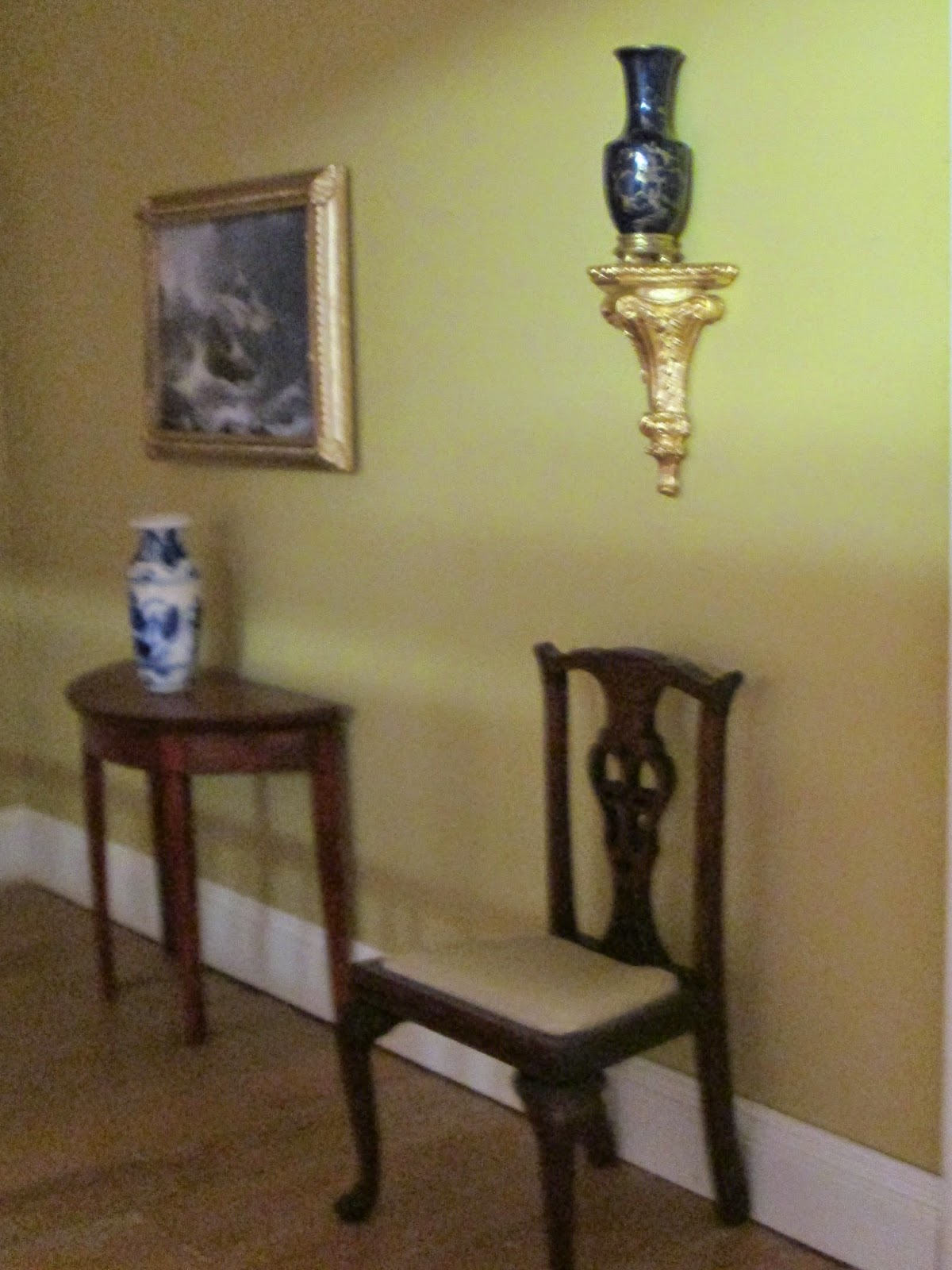 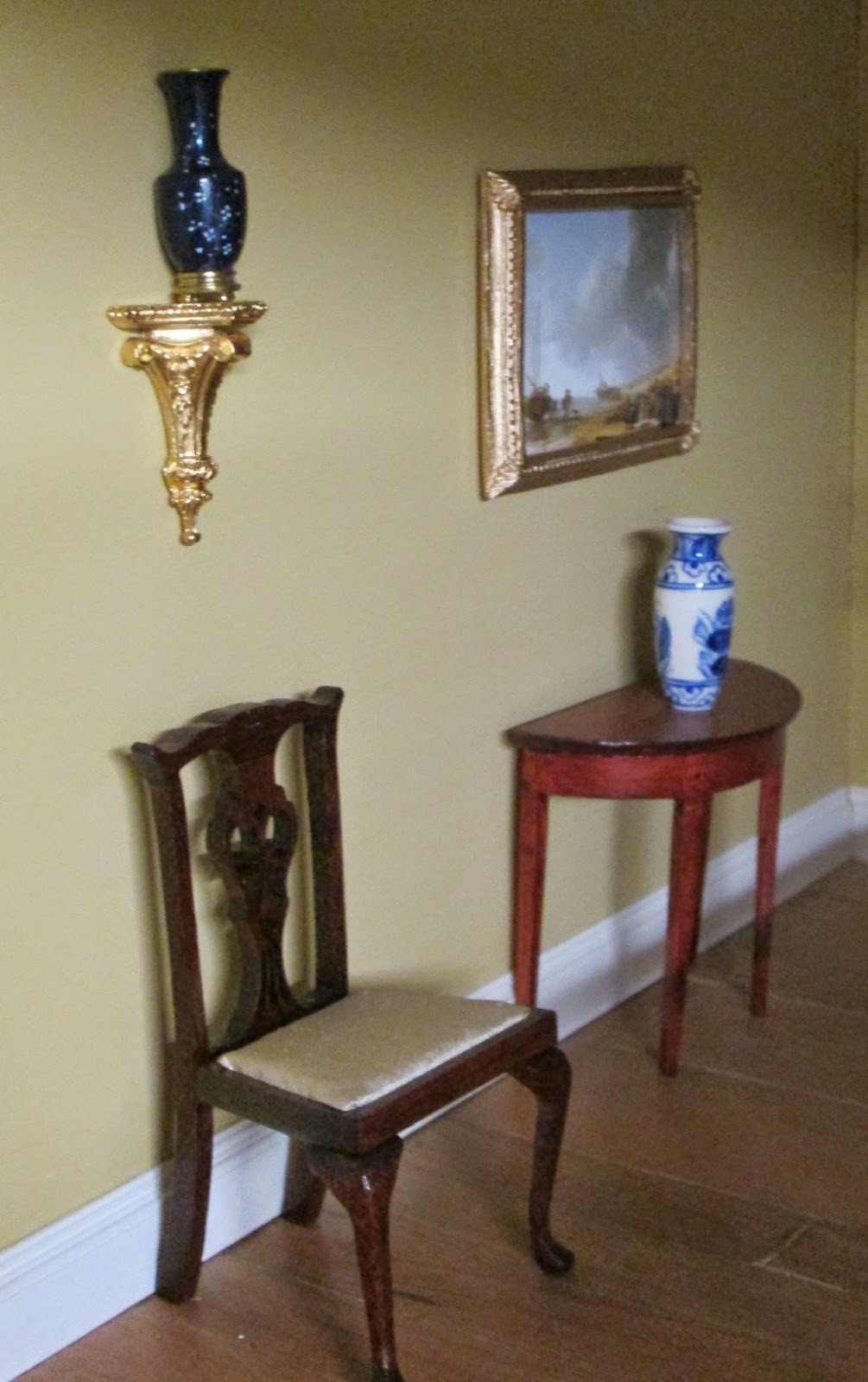 David Iriarte continues to produce some fantastic miniatures and it was nice to be able to buy a little something from him The Chinese style vases on the wall brackets fit in well with other items in the landing of the Georgian house. I think I might look into buying some new paintings or frames to go where the current ones are now, and maybe replace the half-moon tables at some point too. But all in good time. 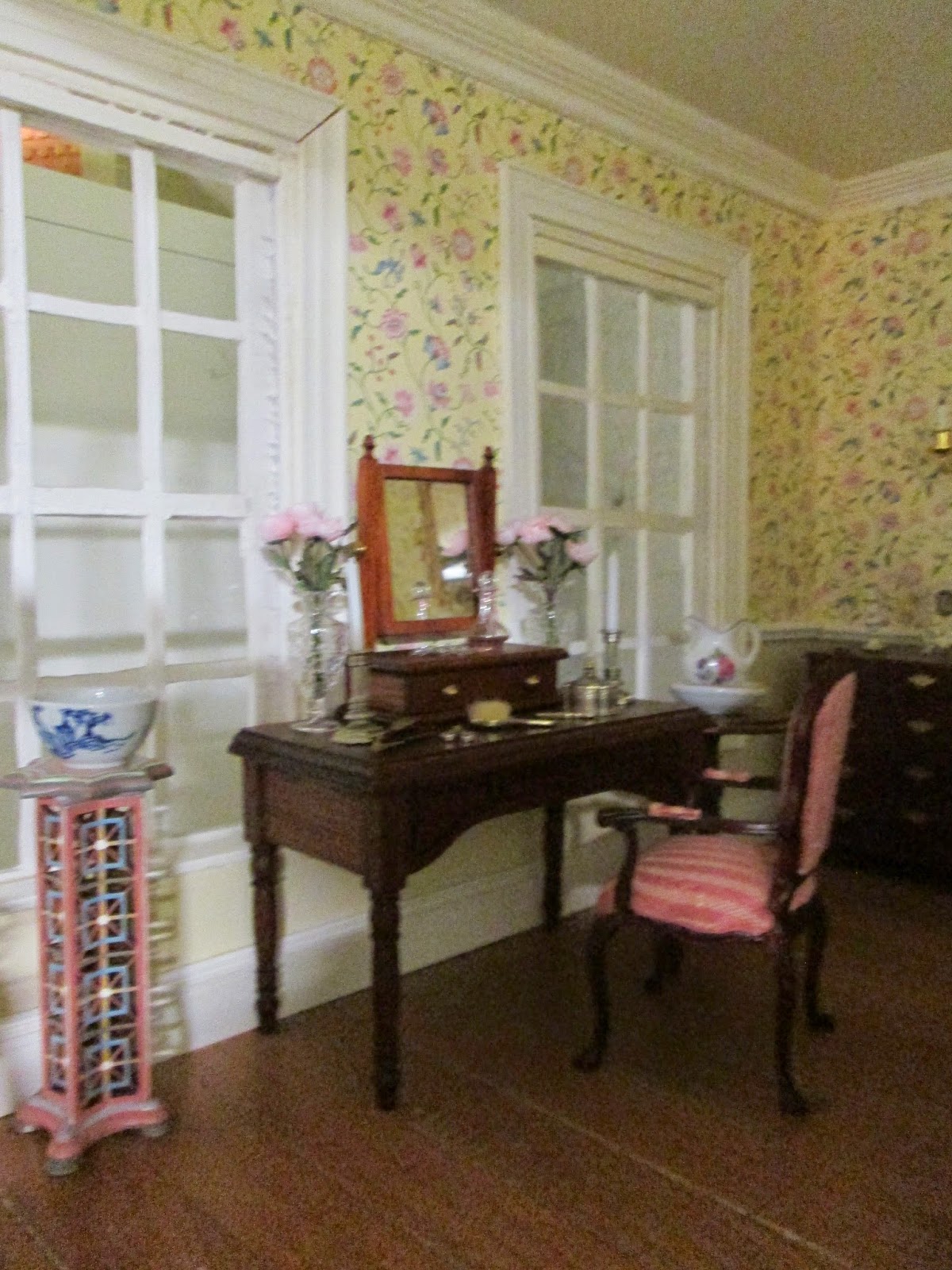 I have always wanted a fan to go on the dressing table in the main bedroom of my Georgian house, but was never very impressed with any I had seen at miniature fairs or online before, I wanted one that would open and close, and still be in scale. A very tall order I know! 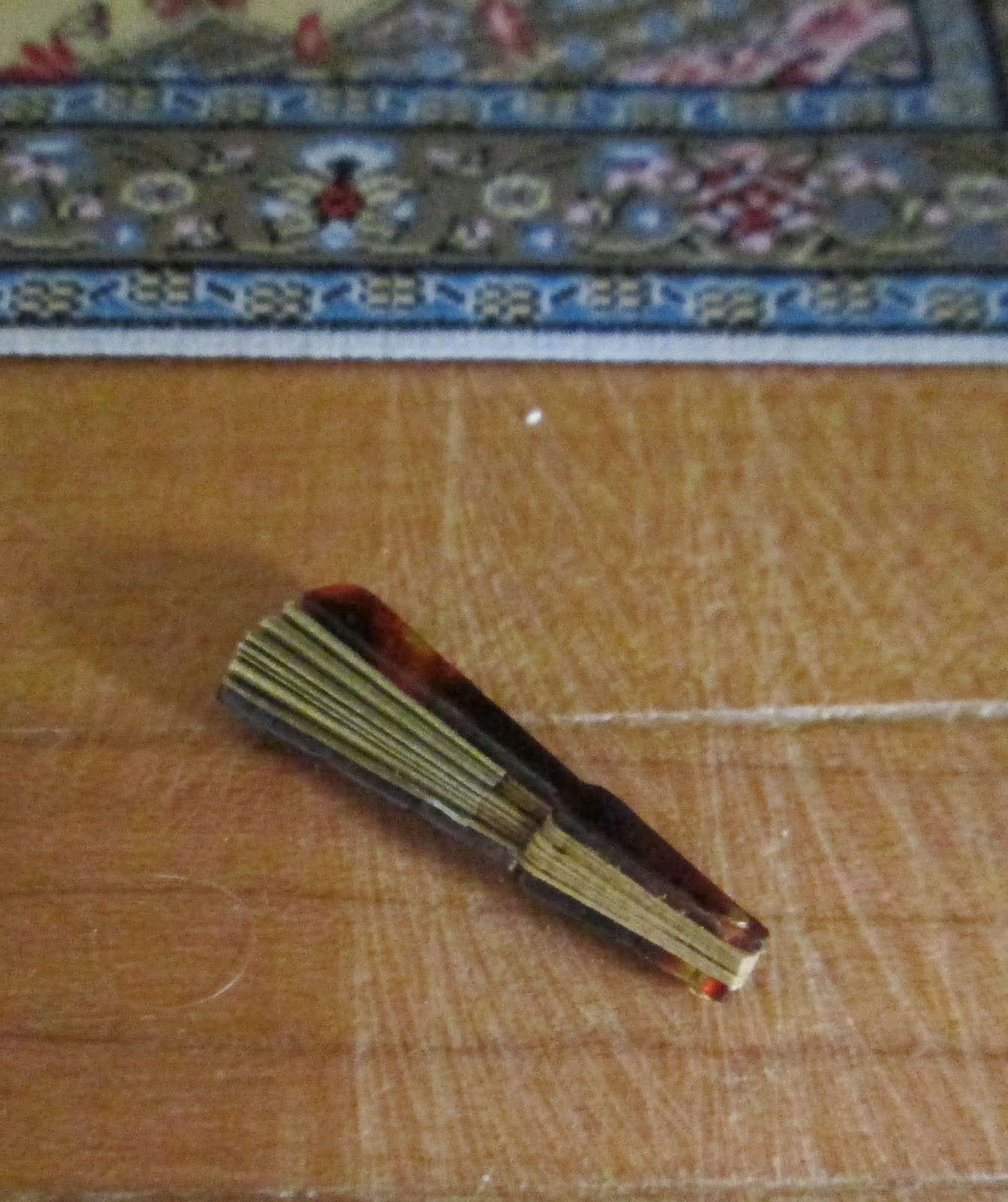 But not impossible!! I was so excited by this fan made by Truly Scrumptious, who do a fantastic range of miniatures from all periods, and all with great attention to detail. www.trulyscrumptiousonline.com 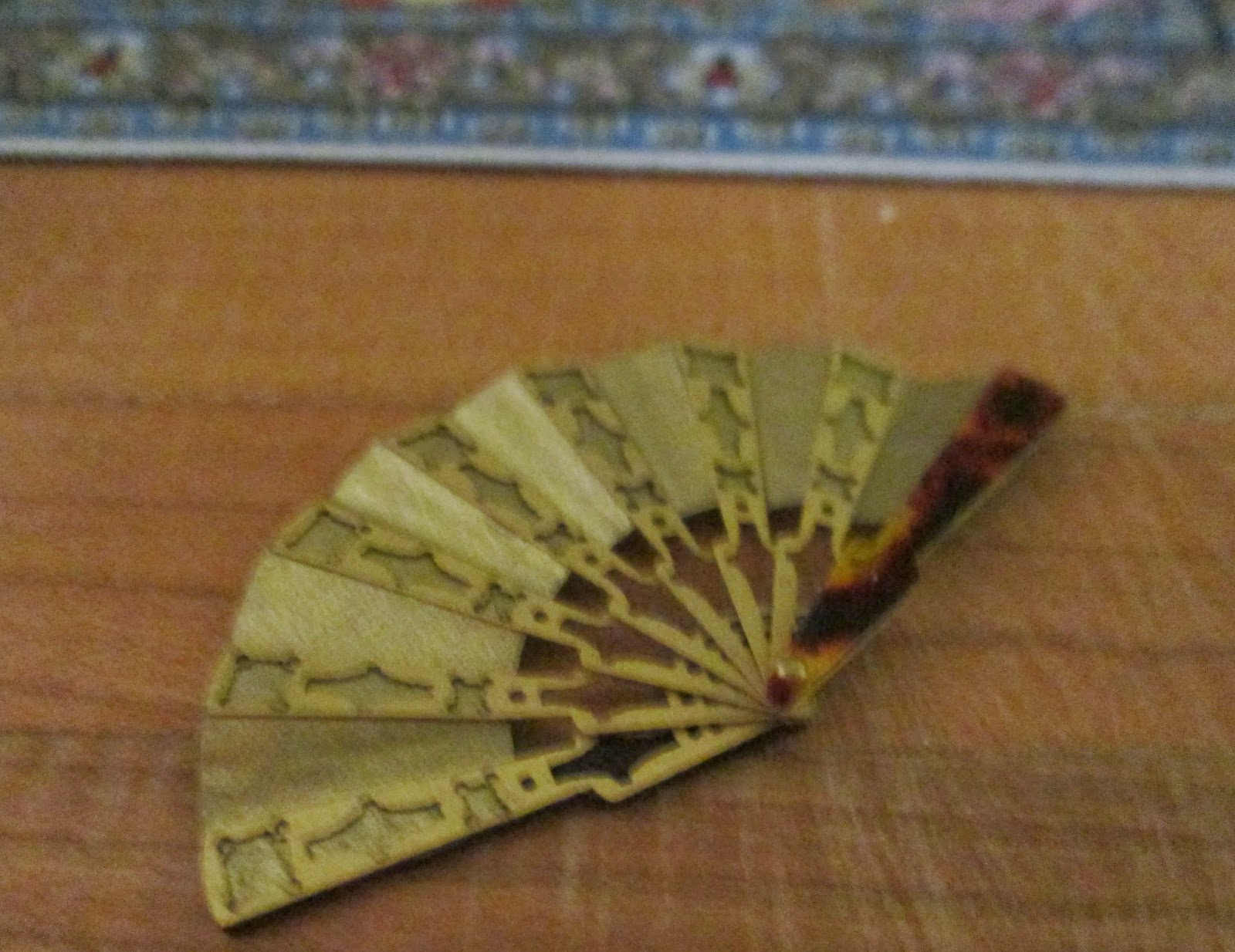 As you can see the fan does indeed open and close, it is extremely fragile, especially for my big clumsy hands, so it does get opened up very much, but I like to think it can be done if needed, and still looks good when folded up, and sits very well on the dressing table. I am also planning to purchase one of their new range of desk top globes, they had sold out at the Kensington show when I went!

Also wanted to say congratulations to John of Merriman Park, and Giac of English Manor dollhouse for the recent articles on their amazing dolls houses that have featured recently in dolls' house magazines here in the UK.

I haven't done much in the miniature line for a while, so there isn't much progress to show you, but one thing that has been done is the sign on the pub. 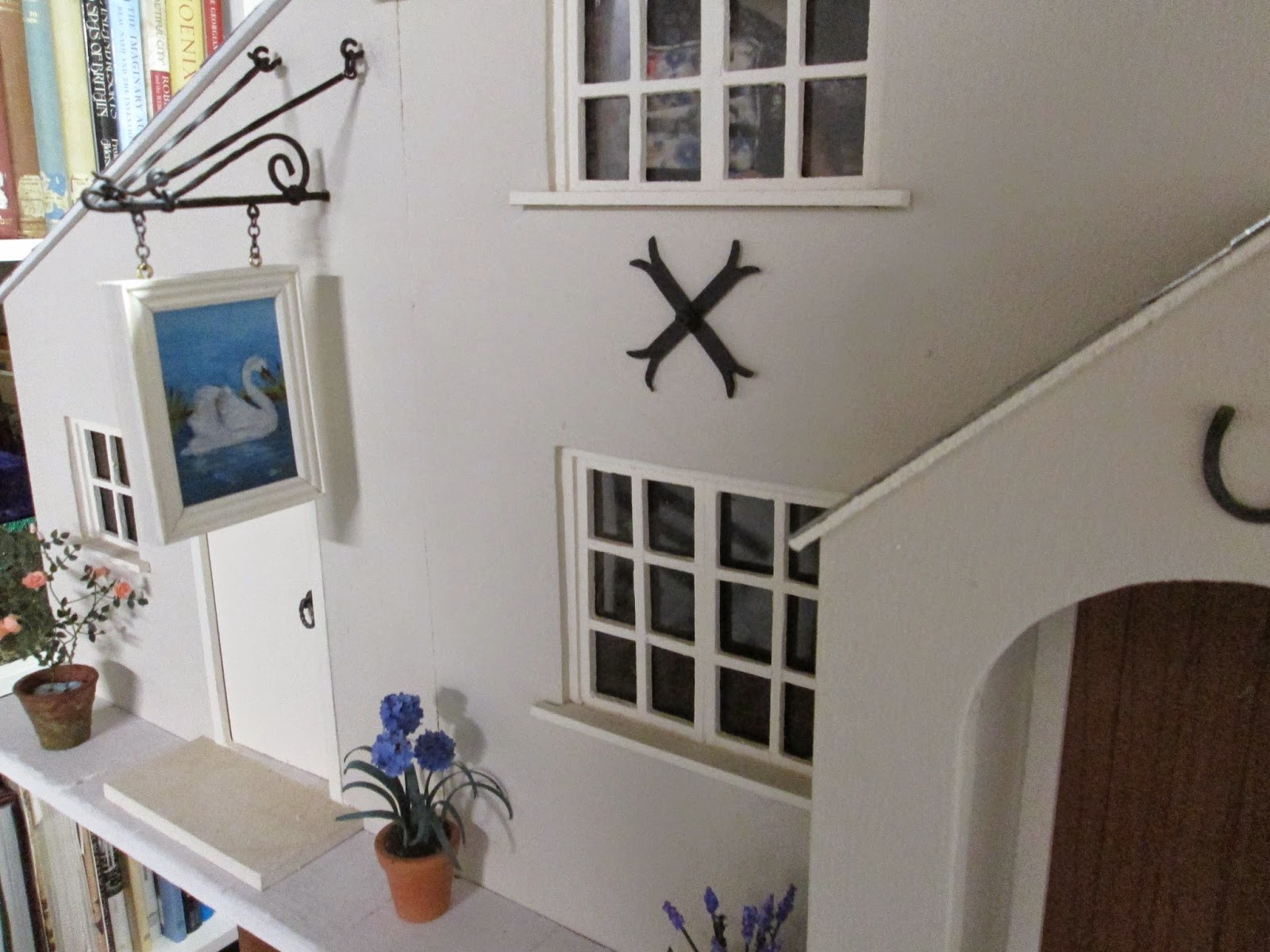 If you go back through some old posts you will see that I painted the swan (or swans as there is one on each side) a while ago, but that was as far as it got for a while. I recently framed the sign and hung it in position. 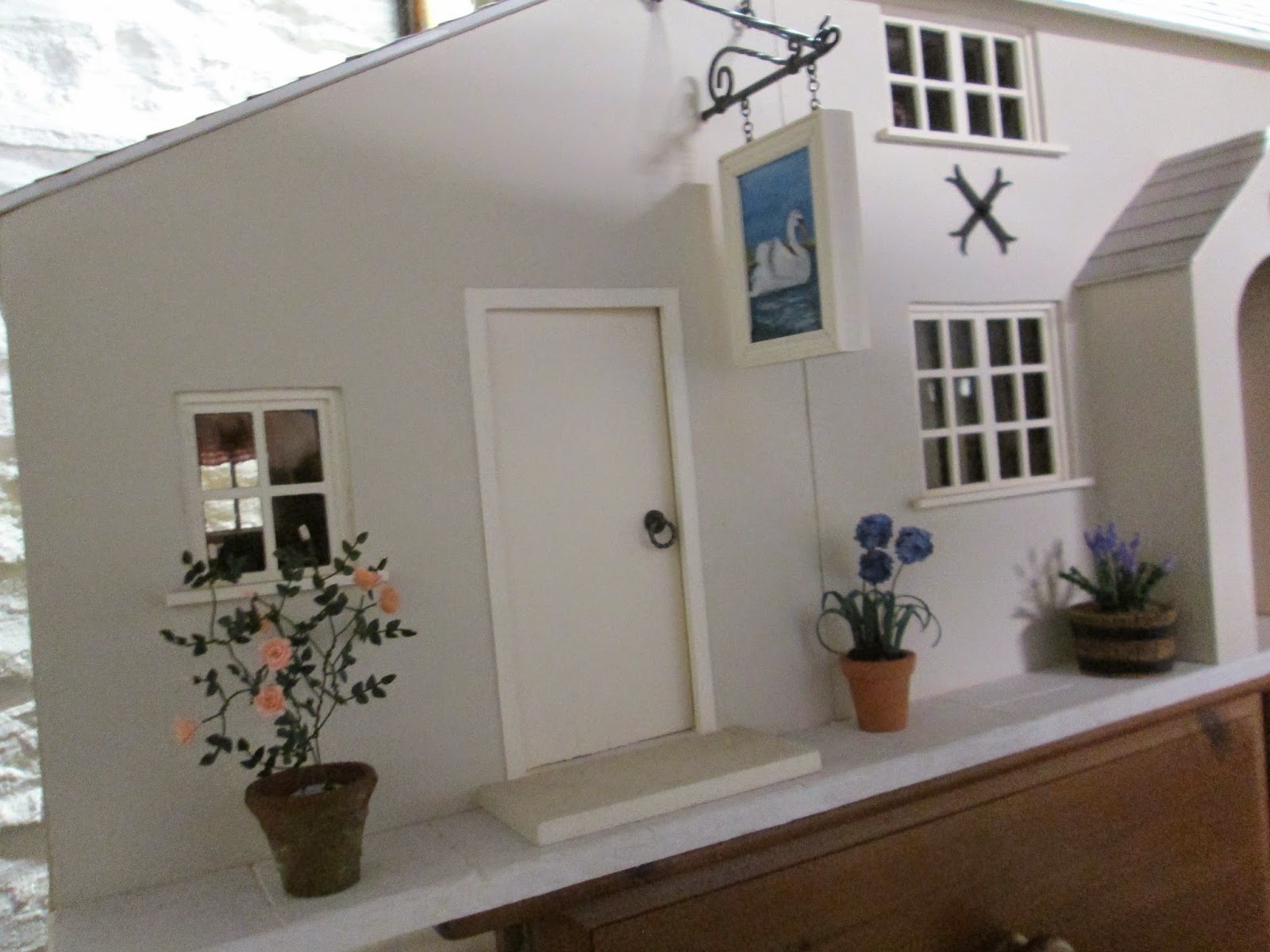 At first I thought it might be a bit low down, but 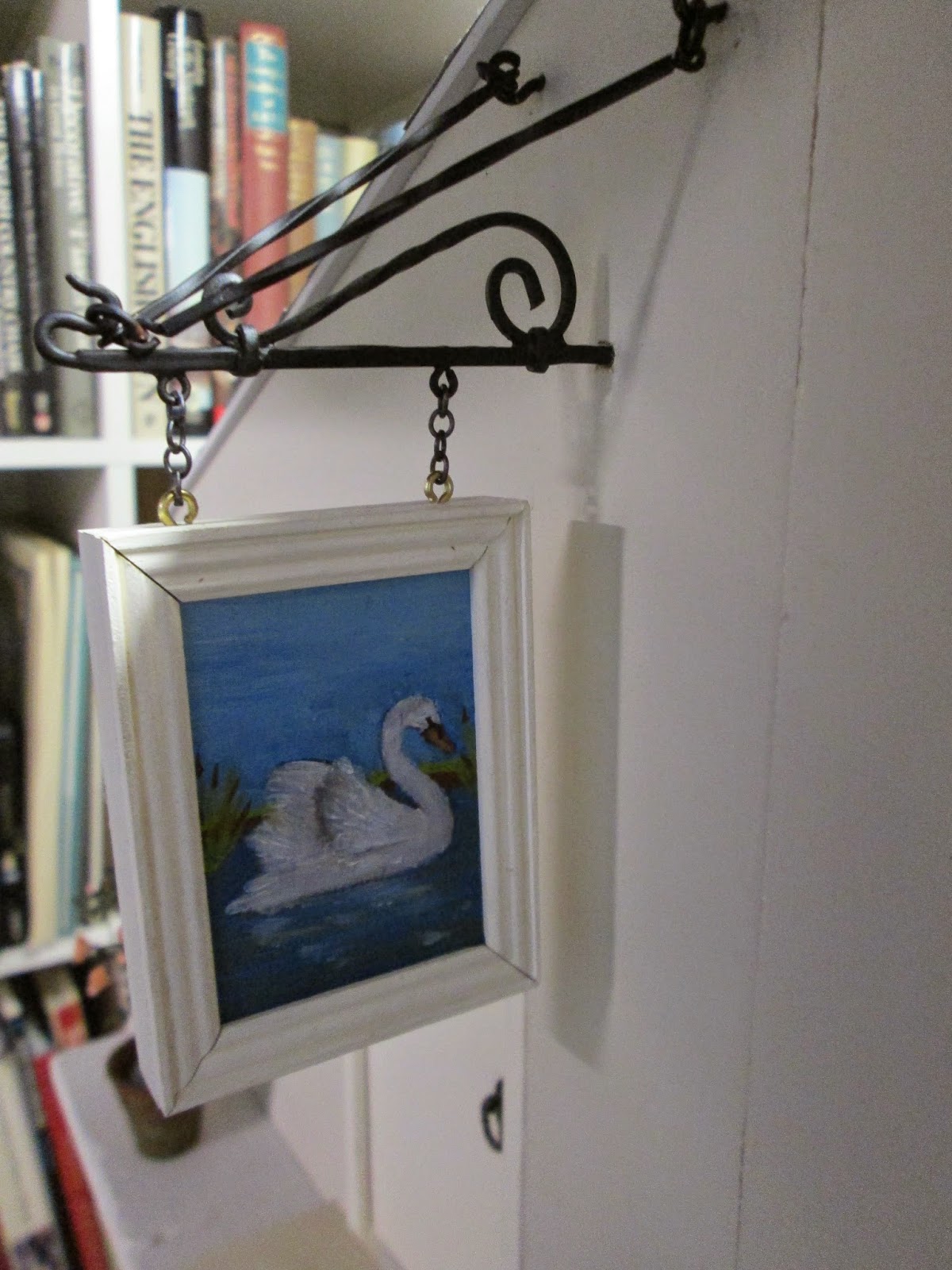 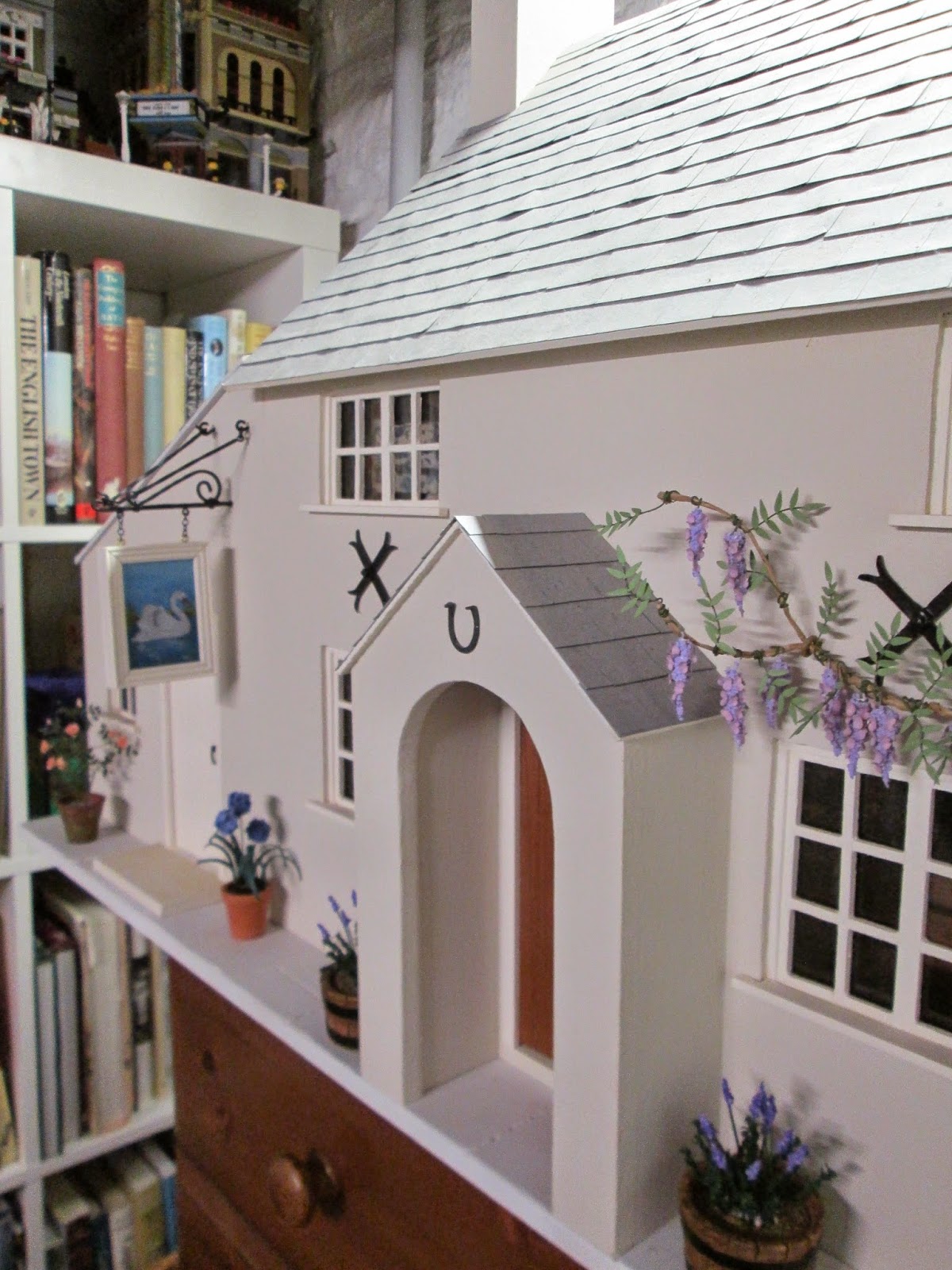 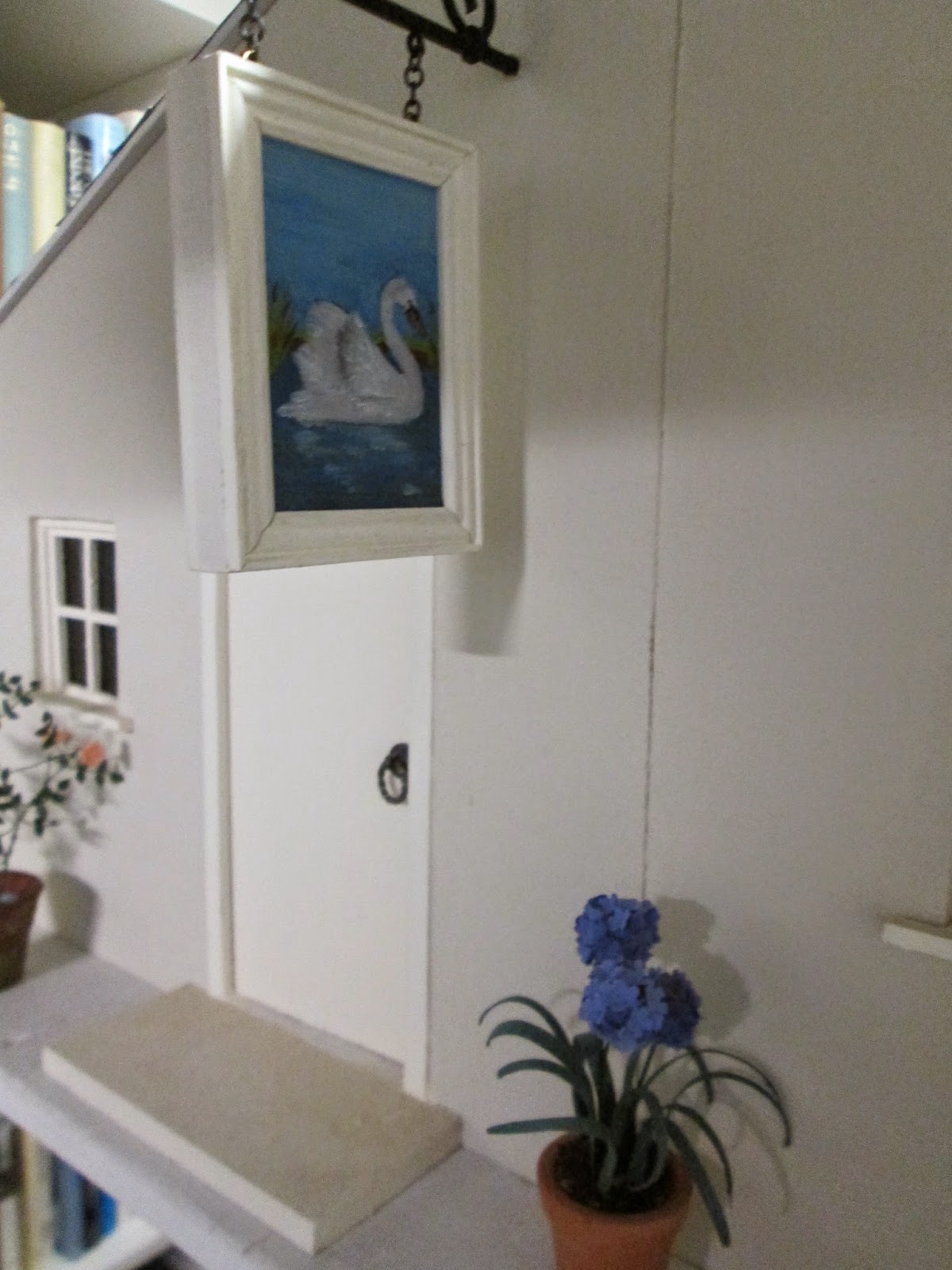