Welcome to this year's Christmas Countdown.

Actually, strictly speaking it is a count up! but that just sounds silly!!! Throughout December, up until Christmas I shall be posting little tit-bits for your delectation and delight, and hopefully spreading a little Christmas cheer along the way! Yes, my special Christmas Project at The Swan Inn does form part of the Christmas Countdown, so do keep a look out for future posts! 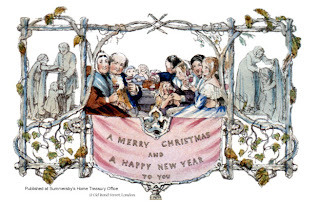 Small home made tokens of love had been sent at Christmas time for many years, but the first commercial Christmas card appeared in London in 1843. Sir Henry Cole is best known for his help in creating the Victoria and Albert Museum in South Kensington after the Great Exhibition in 1851, however, he was a busy man long before this. In 1843 he felt he hadn't the time to write individual Christmas letters to his friends, and thought of having a Christmas greeting printed instead. He called on an artist friend of his, John Callcott Horsley, to create a suitable image to print with a simple Christmas greeting, which he would then be able to post.

The result can be seen above; a traditional British family enjoying a Christmas feast, and getting very 'merry' indeed in the central image, flanked on each side by ideals of charity, feeding the hungry and clothing the naked.  1000 of these lithograph cards were printed, and each then hand tinted. The cards were put on sale in London at a price of one shilling each (which was quite a sum of money!).

The idea caught on and soon Christmas cards were being mass produced, and became much more affordable; this, along with a cheaper postal rate introduced in Victoria's reign meant that soon almost everyone was able to send a small Christmas greeting during the festive season.

The designs on Christmas cards soon became sentimentalised to suit Victorian taste and sensibilities.  Children and animals became very popular, along with religious images and depictions of Father Christmas. 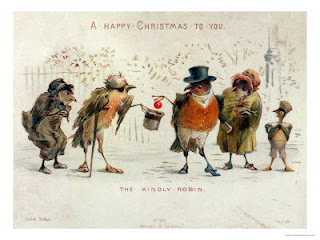 I love this Victorian card above, which captures the Victorian sentimentality and feeling for charity at Christmas. The Kindly Robin, generously gives the Beggar Bird and his wife a red berry in the spirit of Christmas, while the Kindly Robin's wife looks on with 'charitable' concern.
Posted by Andy at 07:05