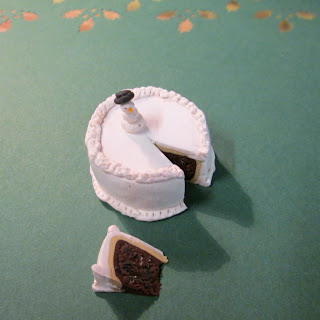 Hello Everyone, Today I thought I would show you the results of another experiment I tried. I wanted to create a Christmas cake for my pub project. I have seen plenty of miniature food items made from Fimo and Sculpy, and thought a cake would be fairly straight forward.

I started out with a lump of brown Fimo, and shaped it into a round cake shape, then used some sand coloured Sculpy rolled out thinly to create a layer of marzipan, then smoothed this over the brown 'cake' base.

After the marzipan layer I took some white Sculpy, and again rolled this out to create a layer of icing on the cake. I rolled out some sausage shapes in white Sculpy and stuck this to the base of the cake and another around the top of the cake and used needle pliers to crimp and texture this to look like it was piped icing.

I then cut out a wedge to make a slice of cake and textured the exposed brown Fimo, to give it a more cake like texture. I also worked in a tiny amount of black Fimo onto the cake slice to give the appearance of currents and other dried fruit.


Finally, I created a tiny snowman from tiny balls of Sculpy, added a tiddly little carrot nose and black hat. Then I baked the whole thing in the oven. It's not too bad for a first attempt, I am quite happy with it. It's a little larger than planned, as the marzipan and icing layers added to the overall finished cake, and I am still not sure how you can handle this stuff and not leave finger prints in it! Any ideas on that one?

BTW. the eyes on the snowman were put on later using a gel pen!