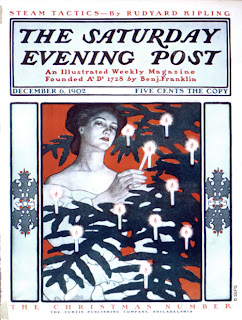 Christmas trees were originally lit by small candles or tapers fastened to the tree. Because of the obvious fire risk, these candles would only be lit for a short time. However, there were many house fires caused by Christmas candles.

The incandescent electric light bulb was invented by Sir Joseph Swan in 1878, and patented in 1880. He used his bulbs to light the Savoy Theatre in London in 1881, which was the first building in the world to be entirely lit by electric light. 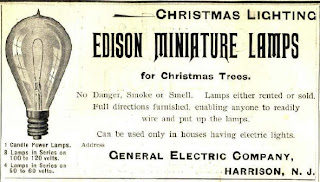 The first known electrically lit Christmas tree was the creation of Edward H Johnson, vice-president of Edison's Electric Light Company. Edison was keen on publicity stunts and so in 1882 Johnson had some small electric lights produced. There were 80 lights in all, coloured red, white and blue, and h hung them on the tree at his home in New York City. The press seems to have largely ignored this stunt, except for a paper in Detroit, which did publish the story. I've read that the New York Times did eventually publish the story in 1884!!

Edison's company began producing Christmas lights commercially in the 1890's, though they were rather complicated as they each had to be hand-wired by a qualified electrician and proved rather an expensive novelty. However, in 1895 the first electrically lit Christmas tree appeared at the White House in Washington DC.

In the early 20th century department stores in the USA began to use electric lights in their displays to attract customers to their stores. As Christmas tree lights became less expensive (and SAFER!) over time, their popularity grew. 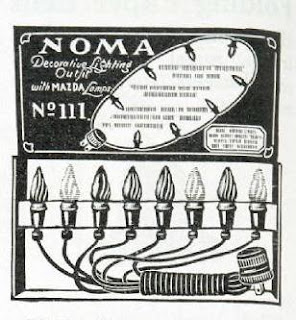 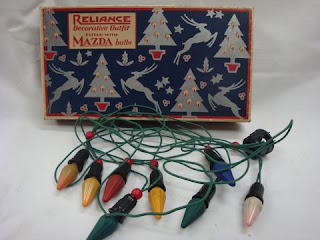 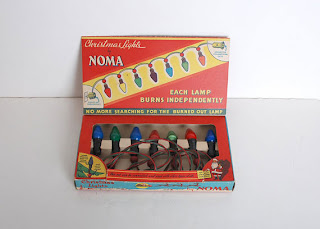 In 1917 a 15 year old boy was so moved by a tragic fire caused by Christmas tree candles at a house in New York, that he encouraged his parents, owners of a business that produced illuminated novelties, to make some electric lights to hang on the tree to replace the candles. His parents liked the idea and some strings of lights were produced, with clear lamps. They didn't sell particularly well, but Albert Sadacca, the teenager in question, wasn't deterred, the following year he sold the lights again, but with coloured bulbs, and that was the beginnings of the NOMA Electric Company, which by the mid 20th century was the largest producer of Christmas tree lights in the world. 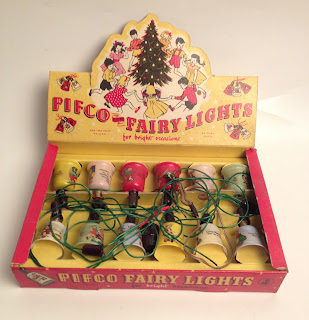 I remember well the string of coloured Pifco fairy lights (not the same as the ones above, ours were like coloured crystal stars) that we used to unpack every year as children for our own little Christmas tree, they lasted for years, though needed new bulbs over time. My mother probably still has them tucked away in her loft somewhere!