OK, there are several Wassail songs about, and they are often heard at this festive time of year, but  what is a wassail, and how would you go wassailing?

There seem to be two main types of wassailing, one has evolved into a festival to bless the cider apple orchards in southern England, the other has developed into what we would now call carol singing.

The term wassail derives from the old Saxon words waes hael which translates roughly as, be healthy.
So it is a toast to good health. 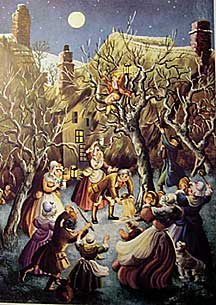 In the cider producing counties of southern England, wassail refers to a mulled cider, a hot, spiced, sweetened cider which has pieces of toast floating on top. The wassail cider is carried from orchard to orchard, often by a wassail king and queen, and is used to bless the apple trees in the hope of a good harvest. The toast from the wassail cup is placed into the boughs of the apple trees, sometimes by teh wassail queen, sometimes by a small boy. The customs vary from region to region. These blessings are often carried out between New Year and Twelfth Night (and are often extended to 16-17 January, the old Twelfth Night on the Julian calendar).

Twelfth Night was traditionally the time for parties and celebrations, with Christmas Day reserved for religious observation. Everything has become mixed up and condensed these days, so much of what was celebrated at Twelfth Night is now part of Christmas. In the Royal Court, plays and masques were often performed on Twelfth Night, and that's the time of Shakespeare's Twelfth Night was first performed for Queen Elizabeth I. 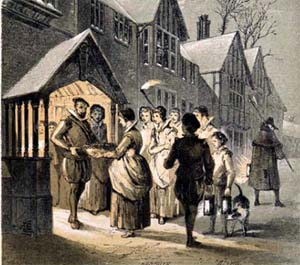 The other type of wassail, which is the origin of carol singing door to door, evolved from the custom of peasants visiting the home of the Lord of the Manor, singing songs and asking (not begging) for food and drink. Think of We Wish You a Merry Christmas, which dates back to the 16th century, where the singers bring glad tidings and call for 'figgy pudding'. 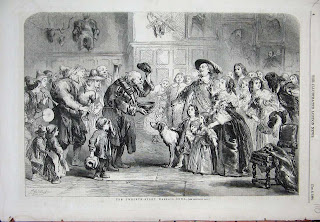 So there you have it! Wassail is a toast to good health and a spiced hot cider; wassailing is a blessing to apple trees and an early form of carol singing.