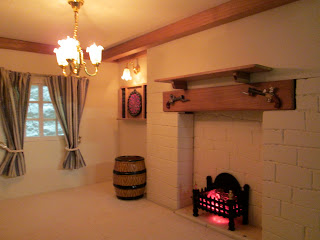 Hello gentle readers! As part of my ongoing improvements to The Swan Inn interior. prior to it's Christmas makeover, I have been tackling the lights. This should have been fairly easy and straightforward as I had learnt many lessons from wiring up my Georgian House, and wanted to make this project easier to wire up. Tape wire and lamp adaptors were kept to a minimum, and I ran wires in channels routed out in floors, walls and ceilings to the back of the building, wherever this was possible. This did mean removing the large chunky plugs from each lamp, and replacing them with tiny Cir-Kit plugs, which fit into sockets designed to be pushed straight into tape wire. All of this was to be hidden behind The Swan, out of sight.

Well, I say that dolls house lighting systems must have been designed by one of Satan's own Hell Demons, to infuriate and frustrate to the highest degree, any poor sap who thinks it will be easy! Some of the lights worked first time; great! Some worked after some tweaking; OK! Some worked by checking connections and tightening brads etc, but some are refusing to work, even now!!

OK, I have run out of tiny plugs, that is true, as I lost one of the tiny metal pins, and think this last plug was faulty anyway, but even when the plug had been fitted the light wouldn't work! Currently the lights in all the major rooms are working, but the kitchen and landing remain unlit! 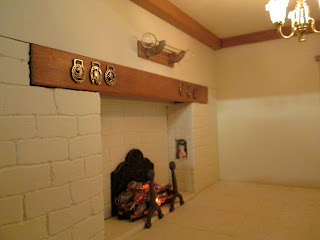 Here are some more pictures of the lights that work! There are also bulbs in the fires to make them glow, perfect for cold wintry nights!!! 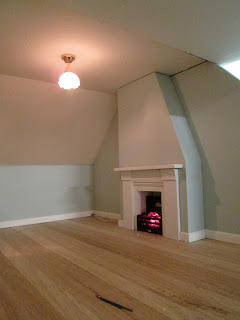 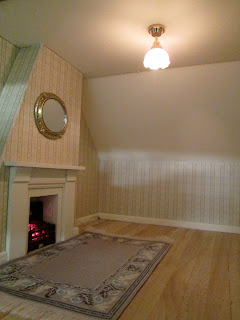 I don't think you've seen the sitting room from this angle before, with the fireplace. This is where the recovered sofa and armchair will be going.