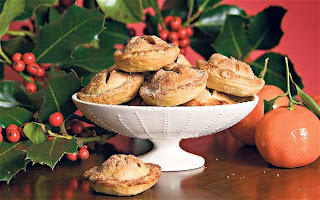 Mince Pies are a great part of British Christmas fare. We eat millions of these sweet, tiny pies every year! The pies contain mincemeat. The name is slightly misleading; there isn't any meat in the pies these days, though originally they did contain some minced meat, and were often called Christmas pies or minced pies. These days the only trace of meat in the pies is the suet, which is actually usually of vegetable rather than bovine origin, but some mincemeats still contain the traditional beef suet. The other ingredients in mincemeat include, apples, dried fruits, sugar and spices, they may have some booze in them, brandy being traditional, but anything would probably work!

It seems likely that the original pies strange mix of meat, spices, sugar and fruit comes form Tudor England, where savoury food was often mixed with sugar and spices in wealthy households, these were expensive luxuries, and a sweet spicy pie was an excellent way of showing off to your guests how rich you were! I can imagine Elizabeth I tucking into a Christmas Minced Pie! 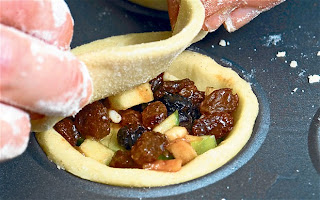 The Victorians (yes, them again!) were the ones who reduced the meat content and increased the sugar and fruit content to evolve into the mince pies we munch over the festive period today.

People used to say that eating one mince pie on each day from Christmas to Twelth Night would bring good luck for the following year, but not if you intend to go on a diet for your New Year's Resolution!! ;o) 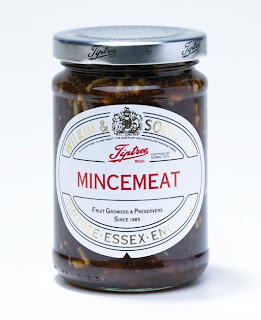 The supermarkets in the UK are filled with mincemeat at Christmas, I am not sure if it sells well abroad. The quality and sweetness vary, but even a basic mince meat can be enlivened with some sharp apples, lemon and orange zest and a drop of your favourite tipple!

Here is a recipe I copied from BBC Good Food online for mince pies. 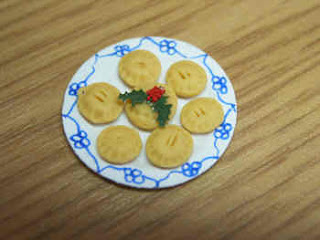 Of course, The Swan Inn has to have some mince pies for Christmas! I bought this pretty little plateful made by Delph Miniatures. (delphminiatures.co.uk) 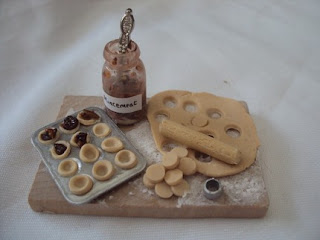 Perhaps your dolls' house residents would prefer to make their own? This miniature mince pie prep board is available from littlehouseatthepriory.co.uk
Posted by Andy at 21:14