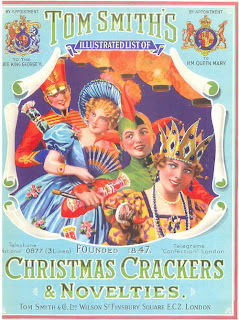 Regular readers may remember that I posted about Christmas crackers last year, but I thought there was no harm in posting about them again as they are a big part of the traditional British Christmas dinner! 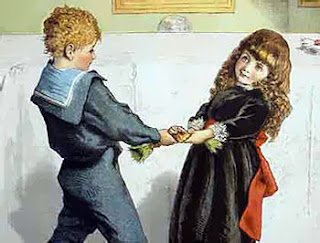 Christmas crackers are another Victorian innovation which became a part of our seasonal celebrations. A gentleman called Tom Smith was in Paris and noted how some shops were selling sweets (bon bons) in small twists of paper. This was something of a novelty as sweets were usually served loose from jars back in England. He bought the idea back to the UK and sold his first Bon Bons in 1847. 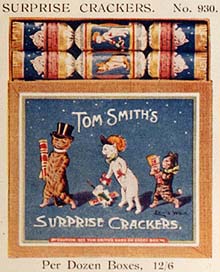 Over time other trifles and novelties were added, such as small gifts or trinkets, paper hats, motos the all important snap. Some say that Tom Smith  was inspired to add a snap when he heard a back from the log on his fire. The snap is similar to that use in pop guns, and is released (or not as is sometimes the case) when the cracker is pulled in half. 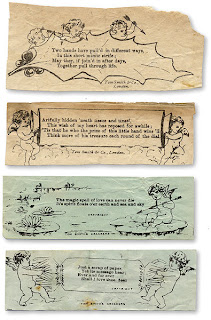 The moto developed into the jokes we know and groan over today. Where do they get these jokes from? I once read that some are sent in from the general public, but many are thought up at the factory, what a job! One thing seems certain, the lamer the joke, the more likely it will be used!

Tom Smith's company still makes millions of christmas crackers each year, and they provide the crackers that grace the table of the Royal Household at Christmas.