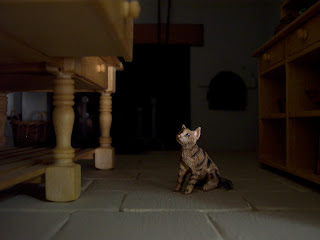 A few days ago Simon was talking about having dolls in his dolls house, on his excellent Miniature Enthusiast blog. I decided early on that I wasn't going to have dolls in my Georgian house, but as I filled the house, I felt it needed something to bring a little life into it. I went along to Kensington last year, thinking I would get a dog for the library, or maybe a mouse for the pantry. Cats had crossed my mind, but I hadn't seen any I really liked before. When I saw this cat I fell for him immediately, he has a cheeky expression and looks like he's about to jump up for some tasty morsel on the kitchen table! For a while he was just called Cat, like Holly's in Breakfast at Tiffany's, but I felt he did deserve a name, and he is now called Austin, in honour of Jane of course!
Posted by Andy at 17:55