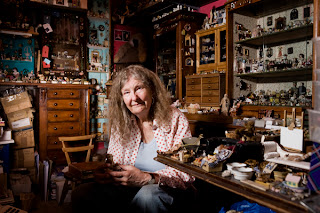 In my earlier blog about the kitchen above Buxton's shop, I mentioned buying the mixing bowl from Kristin Baybar's shop in Gospel Oak, North London. I had first seen the shop on a documentary called Hello Dollies shown on Channel 4, about dolls house builders and enthusiasts (see earlier blog 'Hello Dollies'). The shop looked wonderful, filled with little room sets and drawers full of miniature things, I knew I had to go there!

I did my research, found the shop, and how to get there, and one day  set off to see the shop for myself. Unfortunately, I didn't research well enough, as the train line to and from Gospel Oak was completely closed for months due to an upgrade that was happening for the new London Overground service at the time. I almost headed back home, but was told that a replacement bus service was available, so I jumped on the bus! It was all very exciting, I had never seen any of this part of London before, but began to wonder what route the bus was taking as we seemed to be going further and further into the East End of London, still I thought, it must just be going the long way round. I am not sure at what point I actually was certain that I was on the wrong bus entirely, but it was long before we stopped at our final destination at Stratford, where they are currently building and expensive running track or something. (!!) ((not Shakespeare's birthplace!!!)).

Fortunately, there is a good tube route back to central London from Stratford, so I just went back to where I had started and began again, this time making sure I was in the correct bus! Eventually, I arrived in Gospel Oak!

Was it all worth it? Yes! To be fair the shop doesn't look much from the outside, painted red, it had  a large grill covering the window, and you had to ring the bell to get in, but once inside it was wonderland! Kristin herself was very welcoming and invited me to explore all the drawers and have a good root around. There is so much stuff to look at, so many tiny little things, you really do start to feel like Alice after a while! it is not a big shop, but it would take you hours to see just some of the things inside. Kristin doesn't take credit cards, and I had a limited amount of cash at the time, or I would have bought a lot more, but still came home with plenty of treasures.

I believe the train lines are now running again, and it will take a fraction of the time to get to than it did when i first went, even without the  massive detour! So, i think it is about time I ventured forth again to Kristin's tiny emporium, what do you think?
Posted by Andy at 21:12