Back to the Georgian house for a while. There's not much left to show you in this house really. The hall takes up the space behind the central three bays of my house, on the first floor, with a landing taking up the central three bays of the floor above. That's quite a lot of space really, and if I were building my dolls house again I would have done something different with the space I think. 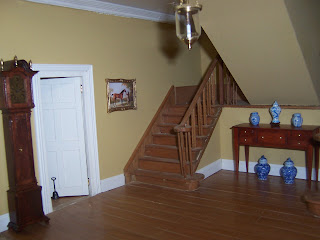 My hallway looks very plain when compared to John's Merrimen Park. I like the yellow colour, another Farrow and Ball paint; I just love the quality of the pigment in their paints and they do very handy sample tins which are just right for dolls house builders! The colour is Sudbury Yellow, and is based on samples taken from  Sudbury Hall. The colour also looks great against the blue and white china I have been collecting. I don't really have much furniture in this room yet, as I was busy getting the main rooms furnished first. The grandfather clock is new, and was made from a white wood kit I got for my birthday. I don't really like the sideboard to be honest, and it will eventually be replaced, but it fills a gap for now! 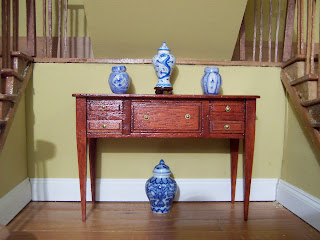 I'm also unhappy with the staircase, I really struggled with this, and the banisters, but the end result was not great, it all looks a little wobbly to be honest! Unfortunately, I stuck it all in, otherwise I would like to rip it out and start again. I'll put it down as a learning curve (ergh!) and move on!
Posted by Andy at 19:33