I thought that I would try and find some nice examples of what Georgians used for cooking, I've mentioned it before, so won't go on to much! We would have started with an open fire, logs of fire dogs and chimney cranes to carry the cauldrons, kettles trivets etc. As the Industrial Revolution began to advance across the country, coal became cheaper and more easily available, as did iron, and the first ranges were developed, little more than oversized hob grates, with adjustable cheeks to vary the amount of coal that was needed, and trivets that swung over the heat. These ranges could be small, or very large with rows of spits at the front (notice the one in the illustration of Brighton Pavillion's kitchen below) by the early 19th century some ranges had a tank for heating water too.

Here is a miniture example of open fire cooking from Sussex Crafts, note the fire dogs and spit with clockwork truning chain, fire back (to protect the brickwork from the heat of the fire) and the chimney crane for carrying pots. It's pretty much the arrangement I have in my dollshouse kitchen.

Another Sussex Crafts miniature, which looks very similar to the kitchen of Sally Lunn's in Bath. Note the bread oven and simple iron grate for cooking. 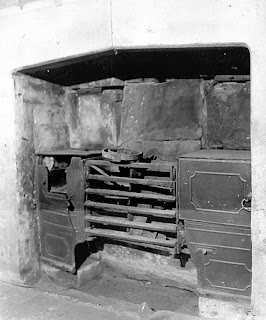 Some examples of early ranges from the period. The first has definately seen better days! 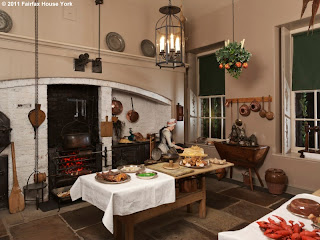 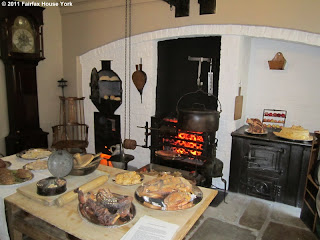 And finally some more examples of a Georgian Kitchen (this one in Fairfax House in York) showing the things I've shown you above in use.

For more details of the products available at Sussex Crafts see www.sussexcrafts.com
They are lovely, and will give excellent customer service too!