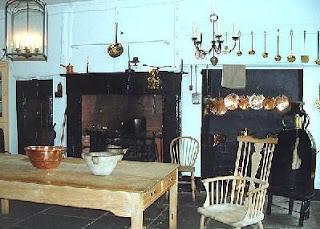 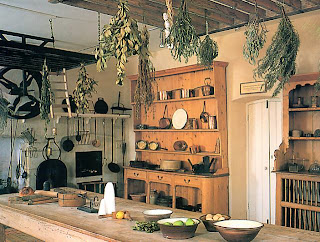 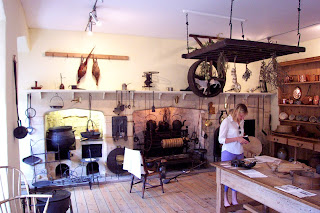 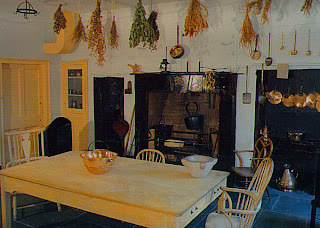 I promised Fi that I would post some pictures I had found of Georgian kitchens that I used to help me research what I wanted to put into my dollshouse. Kitchen ranges don't seem to have developed much before the early 19th century, which still allows them to fit in to a Georgian kitchen, albeit a Regency one. although I think there is one at Ham House in London dated much earlier than that. I've used the traditional fire dogs, chimney crane and spit (all Sussexcrafts) in the main kitchen, but do have an early range fitted in the servants hall (as you might be able to see later). Bread was baked in a bread oven, where hot embers were placed until the oven was hot, and then raked out again. A salt box would have been kept near the fire to keep the salt dry (mine is by Sandy Eismont, a lovely chap who makes great little miniatures suitable for kitchen or cottage from Tudor onwards!) A kitchen table was essential, with simple chairs and stools for the servants. Utensils were usually copper, earthenware iron or wood. Herbs would have hung from the ceiling too. The cleaning of dishes, pots and pans would usually have been done in a separate room. There would have been a pantry for storing food, especially food that might spoil quickly. Wine and beer was stored in the buttery (not dairy products! butt = barrel) and was under the care of the Butler.
Posted by Andy at 20:21