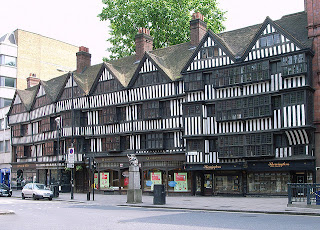 This is a rare survivor in London, a timber framed row of buildings in Holborn. Many buildings such as this were lost in the Great Fire of 1666. 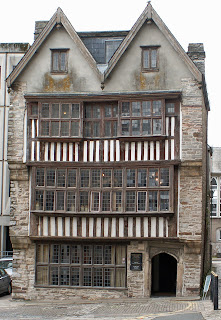 This is The Merchant’s House in Plymouth. It is probably early 17th century, but very much in the same style as other late Tudor buildings.
I think the most noticeable thing with these two buildings is the size of the windows. Glass was still very expensive in Elizabethan England, but personal wealth had grown for many people, and they were keen to show it!
It is the manor houses and Great Houses that are most notable in the Elizabethan period. As the wealth of farmers and land owners increased, they abandoned their cold, draughty timber framed houses and settled into grander houses of brick or stone; these houses also grew bigger, and had more private rooms. The old Great Halls were becoming little more than a place of entry; servants were being kept separate from the family by this stage. 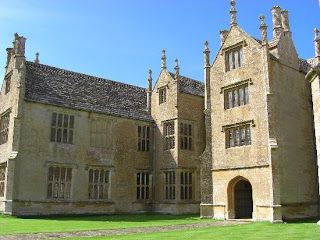 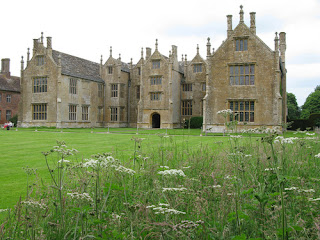 Barrington Court is a fine example of an Elizabethan manor house. It was started in 1514, but altered later. It has a noticeable symmetry, something of the Renaissance that had begun to creep into buildings in England. Barrington Court is also built to an E shape. This is often believed to be a symbol of loyalty to Queen Elizabeth, but is probably more a happy coincidence; many manor houses were built to this E shaped arrangement, but there were also H shaped houses, so there may well be some element of truth in the patriotic theory. 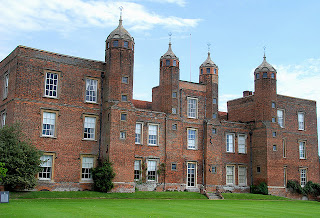 Melford Hall in Suffolk has many Tudor Characteristics, and Queen Elizabeth was entertained there in 1578. The canny Queen didn’t build herself any great new palaces, as her Father Henry had, she preferred to pay visits to her wealthy courtiers, who spent huge sums of money providing accommodation suitable for a queen and her entourage which could run into hundreds! (Makes the likes of J-Lo’s entourage seem like small fry!) she might stay for months too, it was a very expensive honour to accommodate the queen!
Red brick was starting to become less popular in the Great Houses of the Elizabethan England. These were the houses of courtiers, often known as Prodigy Houses, and elements of classicism were making their way onto these grand buildings, though not in any strict classical style. Works by Serlio had been published in Europe between 1537 and 1575, and books were brought to England, but seem to have been used more like pattern books than full architectural guides. 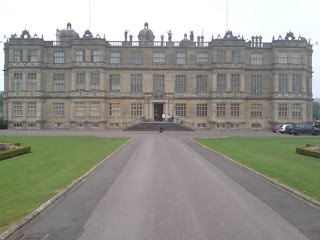 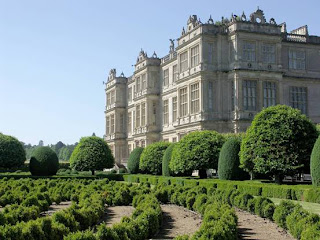 Longleat House, built by Sir John Thynne between 1572-1580, has string coursing and there are columns by the front door, the façade is also symmetrical. It isn’t strictly a classical building, but the elements are starting to appear here. It is also built of stone. 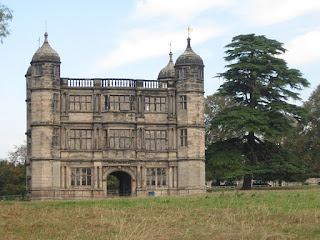 This is the Tixall Gatehouse in Staffordshire, built C1780 by Sir Walter Aston, The house which stood behind it was from a much earlier period, and has since been demolished (as has its successor built in 1780!). The façade is symmetrical, and if you look closely you can see it follows the correct classical orders, Doric, Ionic and Corinthian, and has a classical balustrade, but is again not a strictly classical building. 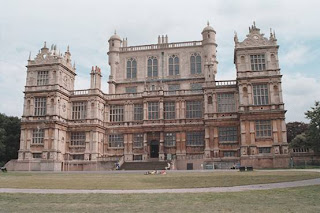 Wollaton Park was built by Sir Francis Willoughby between 1580- 1588. It is highly decorated, and uses some classical elements; it’s a rather eclectic building overall. 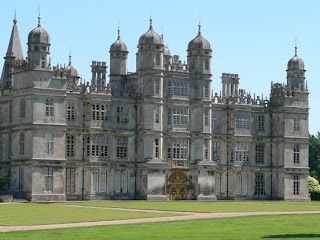 Burghley House was built by William Cecil (Lord Burghley) between 1555 and 1587. The great west front seen here (built in the 1580’s) also has string coursing and some other classical elements. The ogee shaped turret roofs were also popular in Elizabethan buildings as you might have already noticed! 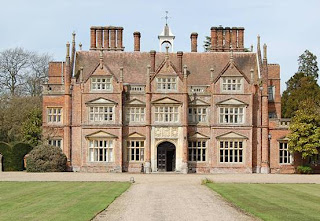 Heydon Hall in Norfolk, built between 1581 and 1584, is a more traditional style Elizabethan house, but the classical influence can still be seen in the pediments above the windows. 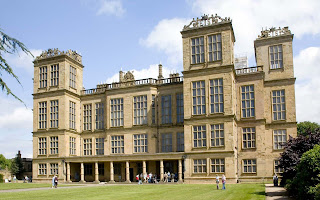 Hardwick Hall in Derbyshire is perhaps most famous for its large windows. Built by Bess of Hardwick (Countess of Shrewsbury) to replace a slightly older house (the ruins still lay next to the new hall) from 1593 to 1597.  The famous rhyme ‘Hardwick Hall, more glass than wall’ is well deserved, the windows are huge, and make a bold statement of the Countess’s wealth. There are columns and string courses used here, but it still isn’t a strict classical building. 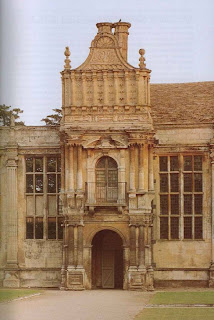 Work on building Kirby Hall in Northamptonshire was begun late in Elizabeth’s reign. The shaped gables (strictly speaking only called Dutch gables if topped with a pediment) are another popular feature of Elizabethan buildings, and this building has plenty! There is another example of the classical orders in use, if not in the pure classical style to which they are usually accustomed! (Kirby Hall is a partial ruin in case you were wondering why there are windows with out a roof above!) 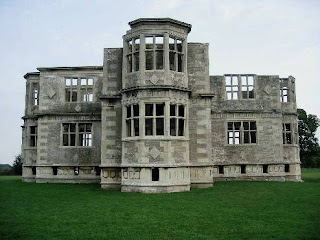 Lyvden New Bield in Northamptonshire is another ruin, or rather an uncompleted building, begun in 1595 and abandoned in 1605. 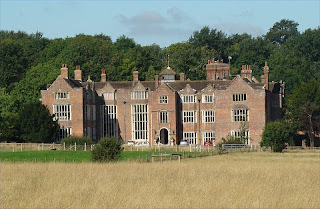 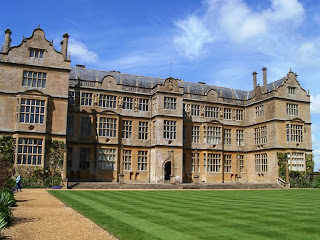 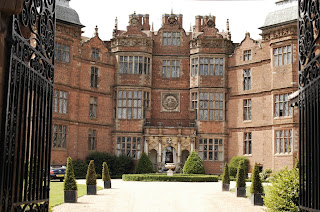 Westwood House in Worcestershire (C1600) is another example of those Elizabethan features; shaped gables; classical elements and large windows. 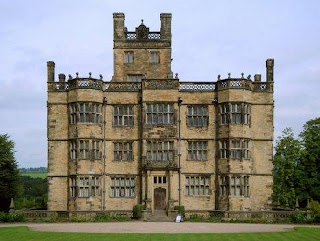 Gawthorpe Hall in Lancashire (C1600) is the last house I am going to show you. It uses symmetry and classical elements, but its openwork balustrade and bay window and protruding tower behind mean it still isn’t a classical building. It would be a few more years, and within the reign of a very different Royal, that the first truly classical building landed in England! But more of that another time!!
Posted by Andy at 17:13