Hopefully, the last few posts have got you inspired to think about a Tudor or Elizabethan doll's house for one of your future projects. If so, I thought I'd mention some of the characteristic details of houses from this period. 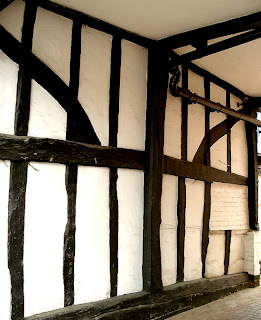 Many buildings were timber framed, the beams weren't usually evenly cut, in simple cottages, but in finer buildings more care would have been taken. Don't forget that beams were not really blackened with tar until much later, so it's ok to use natural wood and leave it with a simple wax finish. Oak was usually used, and this would turn silvery grey over time. 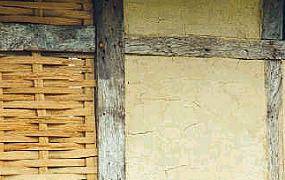 This picture shows the wattle and daub that was used to fill in the timber frame. wattle are the wooden laths that you see on the left, woven over each other. the daub could be made from various ingredients including clay or lime or chalk, straw of hair and sand, chalk or earth. Animal dung was also often added to the mixture. Once dried it was usually painted with whitewash to help keep it watertight. 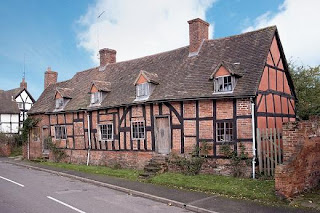 Brick, flint or stone was sometimes used to fill in the timber frames too, like this house above. Roofs were either thatched, with reeds, grasses or straw, or in clay rich areas of the county, roof tiles were often used. Tyler Hill near Canterbury, Kent, was named after the tile works built there, which made many of the decorative floor tiles used in the cathedral. Recent archaeological research has found remains of the original kilns along with some of the tiles made there. 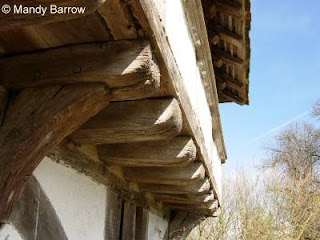 Another characteristic of timber framed buildings is the jetty. the upper storey of the building projects beyond the storey below, resting on the beams and joists of the lower storey. Where a jetty projects on more than one side a 'dragon beam' would be set diagonally at the corners. Carved detail and figures were often used on buildings too, particularly those of higher status, like the corbel pictured above. 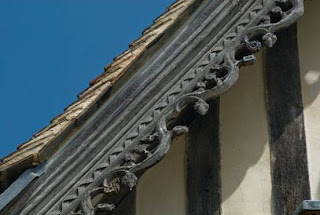 Barge boards might also have been highly decorated on high status buildings, this comes from Little Moreton Hall.

Windows were often simple timber mullions running vertically, and only filled with glass by those with means to afford it, wooden shutters and animal skins were more common in poorer house holds. The Gothic tracery above is a nice detail. 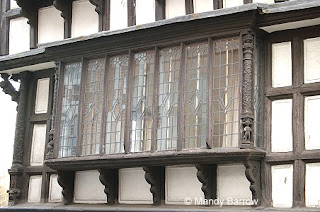 When glass was used it was only available in small pieces, so a window would be held together with lead, these windows are known as leaded lights. (note the carved detail on the sides of the window frame). 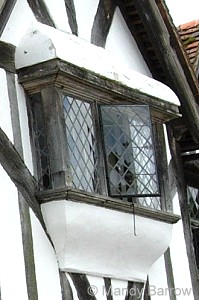 Bay windows were often used in larger houses, both those built with a timber frame and stone buildings. Where a building is projecting out on one storey only it is known as an oriel window. 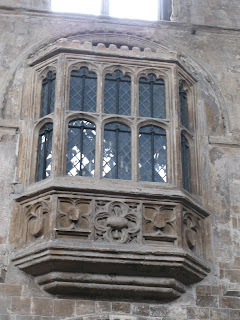 Here is an example of an oriel window in a stone building. looks like it mat have replaced an earlier Norman arched window judging by the carved detail above the oriel window, which demonstrates how buildings can change over many years! 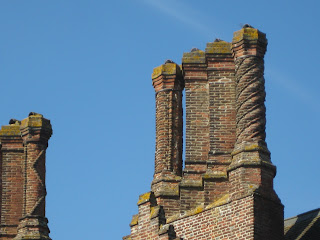 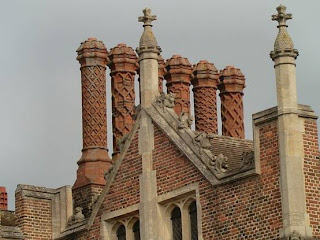 Tudor chimneys were tall and highly decorative. Made of red brick and twisted and turned to create a variety of styles. The second picture shows chimneys from Hampton Court Palace. 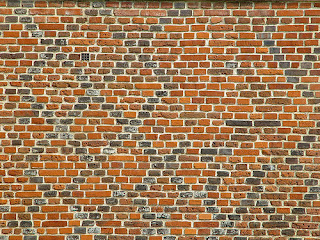 The decorative brick work above is often seen on buildings from this period. It is known as diaper work, were dark coloured bricks create a lozenge shape in red brickwork, sometimes the pattern is criss-crossed in straight lines.

Before we move on to more Elizabethan details, let's just take a look at Tudor plumbing! 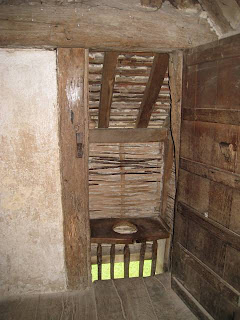 OK, so Tudors didn't really go in much for bathing, though wooden tubs were used, there were NO bathrooms in Tudor houses (or many other houses in Britain until the 19th century!). You might, if you were wealthy enough, and had a moat handy outside, install one of these - known as a guarderobe - a Tudor loo! Really the last word in luxury! Yes, it just went straight down into the moat below. 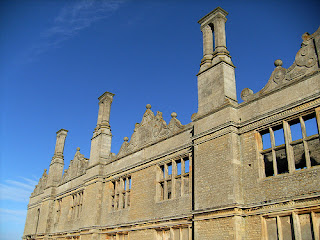 The Elizabethan era saw greater use of stone on the larger houses. Renaissance details such as string coursing and pilasters were used in a haphazard way on buildings, and combined with decorative details from other parts of Europe too. 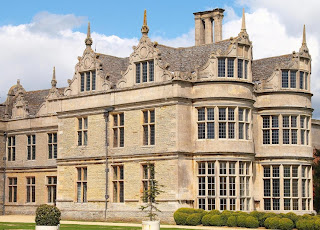 Dutch gables were popular features on many Elizabethan buildings. The windows also gt larger, with a frame work of stone mullions and transoms, but still with small leaded lights inserted. 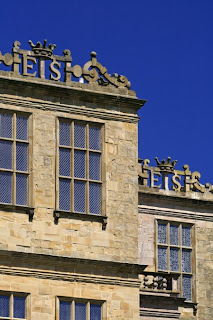 Open work balustrades were popular too, sometimes with the owner's initials included, as with Hardwick Hall above. 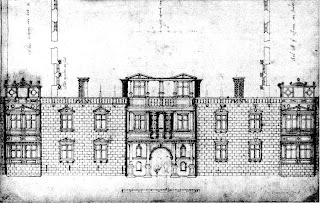 This elevation of Somerset House ( not the one there now!!) shows how classical elements were being used, but purely for decorative effect, rather than in a strict following of classical building tradition. Note the flat roof. 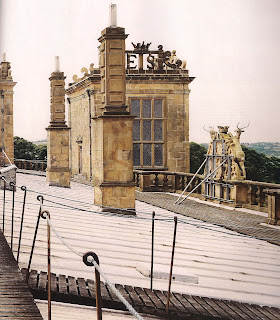 Roofs on grand houses were becoming less steeply pitched, another feature of Italian architecture. these roofs used lead. Note the chimneys too, no longer red brick, stone was more resistant to damage from heat and smoke, and matched the stone used for the rest of the house. 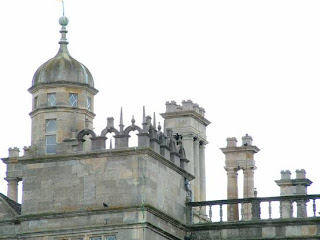 Ogee shaped roofs on turrets feature on many Elizabethan houses. What with these, the tall chimneys and open work balustrades, Elizabethan roof lines could be quite busy looking affairs. But why have turrets and other rooms on the roof? Well, the custom was, after dinner, to take desert on the roof; flat lead roofs made this possible, and the little turrets and rooms made this more pleasant for the diners. This little custom was known as 'taking the leads', and would lead to the banqueting halls, garden rooms and follies built in the future
Posted by Andy at 17:43