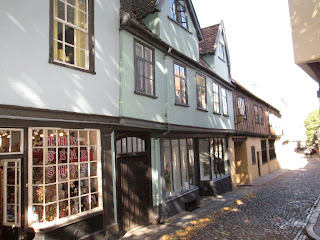 Earlier this month David and I packed up the car and set off for a little holiday in Norfolk. I took far too many photos, and thought I would take an opportunity to share some of my holiday snaps.

The picture above was taken in Norwich, the county city in Norfolk. The scene is Elm Hill, a very pretty little part of the city, with cobbled streets and old timber framed buildings with 18th century attachments! 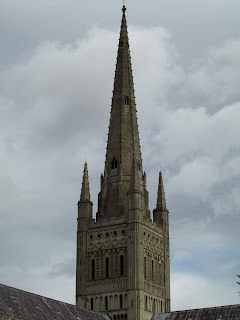 Another landmark of Norwich is the stunning Norwich Cathedral, with its impressive stone spire. Norwich has a good share of architectural styles and there are some interesting buildings to see there. Norwich Castle is worth a look, and there is a rather ghastly Monumentalist County Hall on the Market Square which would have been quite comfortably at home in Mussolini's Italy, and which dominates an attractive Guildhall opposite. 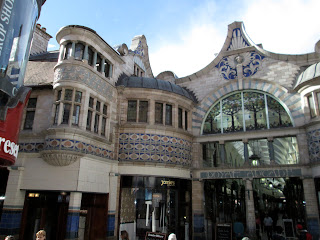 Another little gem is this Art Nouveau shopping arcade. This was lovely to see, as there aren't that many Art Nouveau buildings in England. The arcade is also home to the Colman's Mustard Shop, where you can learn all about this very famous brand of mustard, which was founded in Norwich, and buy some to take home! (as it's readily available in Waitrose, I declined!!)


While in Norfolk, we took the opportunity to visit some of the houses I have mentioned on previous posts here. Oxburgh Hall, Felbrigg Hall and Blickling Hall. For some reason I don't have any pics of Felbrigg, but here is one of Oxburgh... 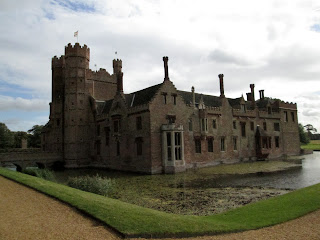 Outside of Oxburgh Hall was a semi-ruined Church, it was quite an odd thing as the church seemed to still be partly in use, but much or it was in ruins. we didn't get to find out more, nor go inside as there were builders working inside the church itself. 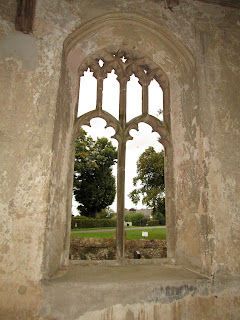 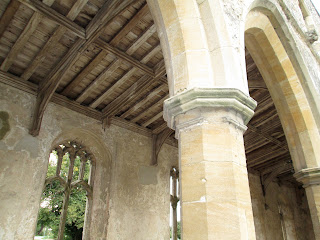 We weren't able to take pictures in the house, but inside there are some very impressive embossed painted leather wall coverings on the staircases, and some embroidery done by the hand of Mary Queen of Scots herself!! You are allowed to climb to the roof of the gate house, which has some lovely views. There is also a 'Priest Hole'. something I am not sure I have mentioned before in posts, but have meant to. it was basically a hiding place for Catholic priests who came to the homes of wealthy Catholics after the Reformation, when Catholic worship was prohibited. Should there be any unexpected (or even expected) visitors calling at the house, the priest could be hidden away. These little hiding places probably saved many peoples' lives! 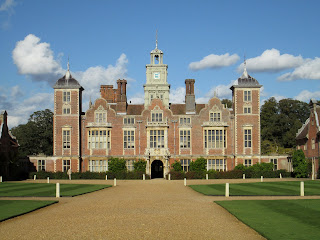 Felbrigg Hall (not pictured) has some very fine plasterwork ceilings, and a charming lilac coloured dining room I would be very happy to take supper in!! The house above is Blickling Hall. If you get to Norfolk, do take time to see it, along with the other houses I have mentioned. Blickling has some of the nicest bathrooms I have ever seen in an English stately home!! It also has a staircase I have featured before, anyone remember it? 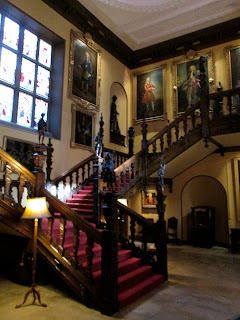 Sorry this picture isn't very sharp, I hope you can still see it ok. If you have very sharp eyes you might be able to see a portrait of Henry VIII, it is labelled as a Holbein, but I think it is a copy!! 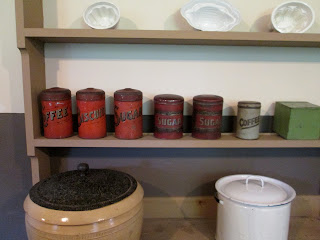 Social history has become an important part of the National Trust experience, and no tour of the house is complete with out a visit to the kitchens and other servant areas. The kitchen at Blickling was nothing special, but I was rather taken by the row of storage tins on the dresser. They put me in mind of Two Bad Mice !!

Upstairs were some very nice rooms, the Chinese bedroom, has given me some ideas for the bedroom of my Georgian House. 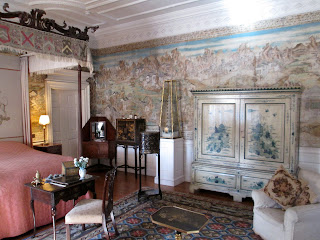 Most unusual were these Chinese Pagodas in cases, which would be nice to find in miniature! I love the bamboo frame on the case too! 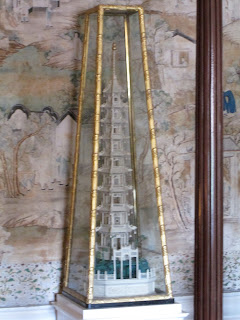 On the wall of one of the bathrooms, was a lovely set of Meissen, comprising a mirror and matching pair of wall sconces. Here is a picture of one of them; 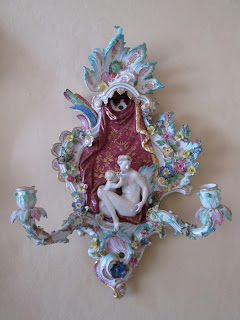 Another amazing feature at Blickling is the Fire place in the Drawing Room, which is an original Jacobean one, although it was originally painted to represent different marbles, the Victorian owners stripped it back to the bare wood, because they thought it looked more authentic that way!! 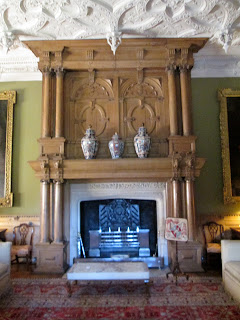 We also visited another House, which I haven't yet featured on this blog before, called Holkham Hall. It is an eighteenth century building, so still a little too early for my Period Style posts!! I'll show you some pictures of the house now, and keep an eye out for future posts on English Paladianism. 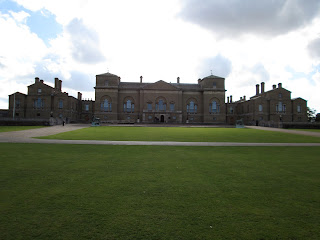 This is the main entrance facade of Holkham, It leads into one of the most stunning entrance halls in Britain, which I will show you in a moment. Most photos of Holkham Hall are actually taken of the south facade, with its temple front. 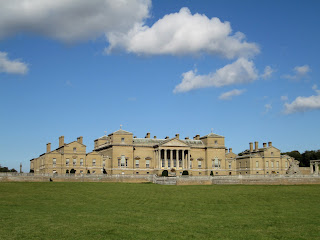 The Marble Hall, feels just like you have entered a Roman Bath or Temple, which is hardly surprising perhaps, as it is from the buildings of ancient Rome that this room takes its inspiration. The walls and Ionic columns are clad in alabaster, and there is an amazing coffered ceiling. 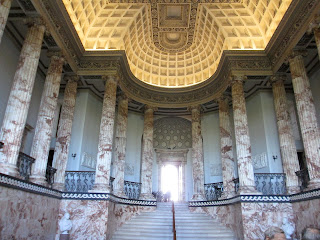 The Dining Room is the next room you enter, which is a Single Cube Room, with an apse. Symmetry was important, so two fireplaces were installed in this room and false doorways added to balance the real doorways. This room also has a domed ceiling, though that isn't obvious when you first look at it! 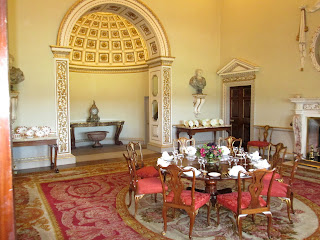 I took far too many photos to show you them all here (hears collective sigh of relief!!) There was a great collection or art and sculpture in the house too, In fact the house was pretty much built around the art collection! In one of the state rooms there is a wall practically covered in Claude's  and Poussin's, a real treat for me!!! 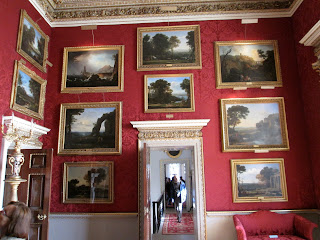 The kitchens at Holkham were also rather special, dating from the 19th century, there was an amazing range, and a huge collection or shining copper pans! 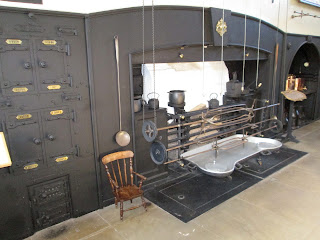 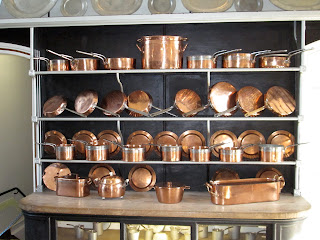 Although Holkham looks like it has been built of stone, it is actually built entirely from a local brick, as this picture shows. 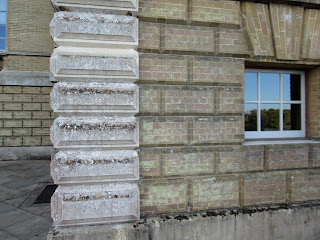 I was going to add some pics of the house we stayed in, and a few other things that we went to see whilst on holiday, but I think I will save those for another post. Hope you enjoyed the photos! ;o)