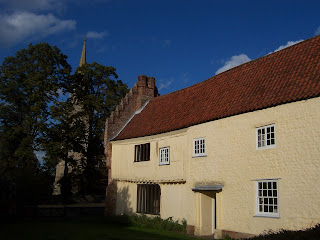 Pictured above is the lovely old vicarage at Methwold in Norfolk, where we stayed during our little holiday there. Seeing that vivid blue sky makes me yearn for that early autumn sunshine we enjoyed while away. Today it has been foggy and damp, more David's type of weather than mine! The picture shows the side of the Vicarage, and the church beyond it.  I'll tell you more about who rents out the cottage a little later, but first I wanted to show you more of the house. 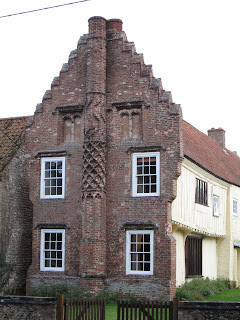 The history of the vicarage is a bit of a mystery.  The brickwork gable is certainly Tudor, but why is it here, attached to a small village vicarage? Is the timber framed part of the building beyond the gable older, or built at a similar time to the gable? Brick was very expensive in Tudor England, and usually only used by wealthy landowners and royalty, so why has it been used here? The sash windows are later additions, built into what were originally carved brick mullion windows, like those still existing, but bricked up, at the top. 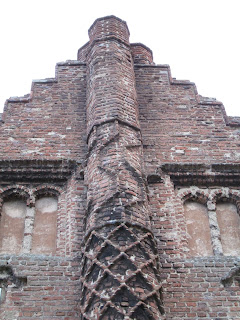 You can see the carved brick work detail better in this photo.  The fact is that no one really knows why this building is of such a high status, it would certainly cost far more that a small parish vicar could ever dream of affording!

But, it isn't just the outside that is interesting!! 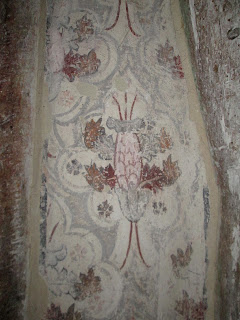 This is part of an original Tudor wall painting. a repeat floral pattern, which covered the walls of the first floor room behind the brick gable end. Again, this would have been well beyond the budget of most people, so why it's here adds to the mystery. 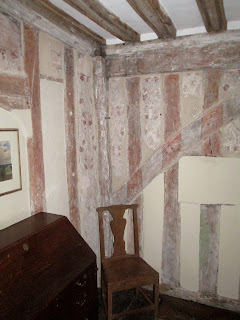 You can see more of the pattern here, and not the red coloured beams, which were also decorated with another pattern, and do you see where the curved cross beam has been painted over so it doesn't disrupt the vertical design? It's really quite amazing how this paintwork has survived - it's between 500 and 600 years old!!!

Here are a few other details from the house; 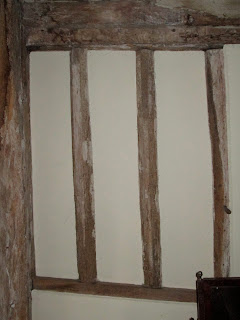 This picture shows an original window frame, now blocked up, on the side of the building in the bedroom.  There are still traces of the original grooves where a shutter or panel would have slid across the window opening (it was unlikely to have been glazed when the building was originally built) 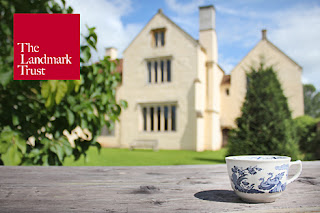 The Old Vicarage at Methwold is owned by the Landmark Trust. The Trust is a charitable organisation (not to be confused with The National Trust) that rescue old buildings which have either fallen into ruin, or have a great historical interest. Once these buildings have been restored, they are rented out for holidays, and the money is used to keep the buildings in good order. This gives buildings a use and purpose again, and saves them from possible destruction. I think they are fantastic, and David and I have been very lucky to stay in several of their buildings over the past few years.

The Landmark Trust have buildings all over the UK, some sleep only 2 people, some up to 16 people. You can choose to stay for a long weekend, four nights midweek, or a whole week. They also have buildings in the USA, France and Italy, run by Landmark organisations in those countries along the same principles as the UK organisation. 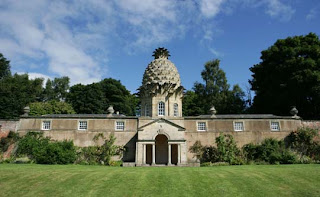 Note to Fi: I thought you might enjoy a stay in this pineapple building, owned by the Landmark Trust, in Scotland!! ;o)

For more details about the Landmark Trust, their properties and what they do, see