A Spark of Inspiration! A Sweet Surprise and Some New Minifigures 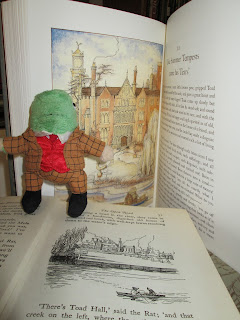 I feel that I have been rather neglectful of my miniatures and my blog this year. A major project at work and redecoration at home have taken some of my spare time, but I really don't think there has been enough progress on the miniature front. Now that autumn will soon be spreading its russet mantel across the country, I feel it's time to settle down and crack on with things.

I have not done much at all to the 1:24th scale house project I started late last year, it's still in pieces and unpainted MDF! Truth is, I haven't felt very inspired by it, though I do intend to finish it, I just haven't had a passion to get on with it!

The pub still lacks a swinging sign and I need to make some plants for the front too. Of course the dreaded curtains have still to be done in the Georgian House too, though this should be much easier to do thanks to John of Merriman Park, who has given me his Pretty Pleater.

So, there's plenty to be getting on with. But wait!! What is this? A spark of inspiration?

Yes! whilst rummaging in my local Oxfam I found a little soft toy, a dressed frog, or rather toad. Mr Toad, no less!!! And where does Mr Toad live? 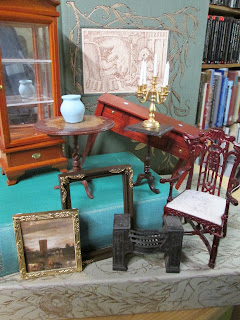 So, when I have got on with a few jobs I need to do, I will have a go at making my new friend a miniature Toad Hall. EH Shepard illustrated one of the Wind in The Willows books (the smaller of the two in the top photograph) there is a small illustration of Toad Hall, looking like a rambling old ancestral home. I want to recreate something akin to this, but pared down to capture the essence without taking up too much space. I'm thinking of a Great Hall, Minstrel's gallery, huge fire place, armour, ancestral portraits, a smaller parlour with a masculine edge, a bedroom and some other rooms, a jacobean staircase and much more besides.

I have plenty of bits of furniture which have been removed from the Georgian House over the past few years, which I can put to use in Toad Hall (this includes, for those sharp eyed readers, the large chair that was in His Lordships bedroom!!) 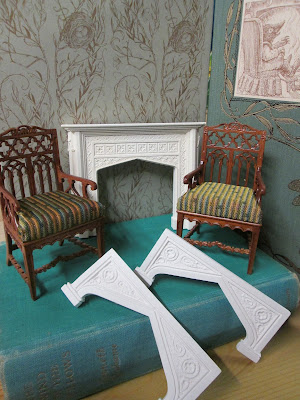 I also happen to have some other pieces that were earmarked for a secret project I was going to do in January.
You can see that it didn't get very far! I was going to create a gothic style room box for David as a surprise gift, and bought a few things to use in the project.

However, in passing one day, David mentioned that he wasn't keen on room boxes, so the project got shelved without him even knowing about it! It had wondered what to do with the pieces I had bought already, but realised that they would be perfect for an Edwardian period home, so these miniatures will also find a place in Toad Hall! 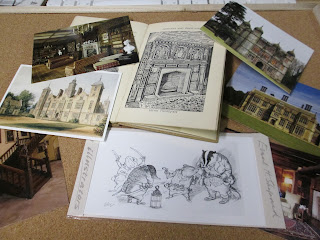 Without getting too carried away, I have started collecting ideas that I might be able to use and recreate in miniature; there are postcards, books, cards and so on, I have even begun looking for miniature frog ornaments which might come in useful in the project!!!

I will let you know more when I have some more idea of the final look I want. I will also keep you updated in other little things that I have been doing on my other dolls houses. 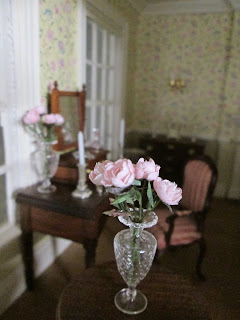 And now for the Sweet Surprise in the title of this post. Yesterday, after an extremely long day at work, I arrived home to find a parcel waiting for me on the dining room table. I looked at it and wondered what it was, who had sent it? 'It's from Ilona', said David. How did he know? and how did Ilona get my address? I opened the package and read the pretty card that was enclosed; David and Ilona had been talking it seemed!! Inside the package were some beautiful miniature peonies, so delicate and wonderfully detailed! 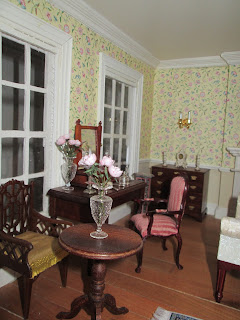 They looked perfect in the vases I had on the dressing table of the Georgian bedroom, I had to split the flowers between the two vases as the vase necks were so narrow that wouldn't fit into just one, but I think they look better in both vases anyway! 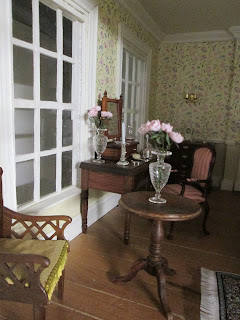 Thank you Ilona, for a beautiful gift and a wonderful surprise, yet again, I am amazed at the kindness shown by my Blogland friends!!

I also received some miniature perfume bottles, which Jenny from The Swan Inn insisted on having!! 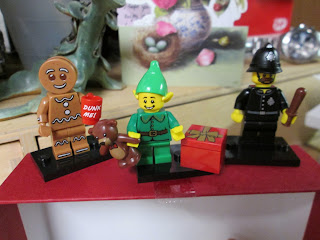 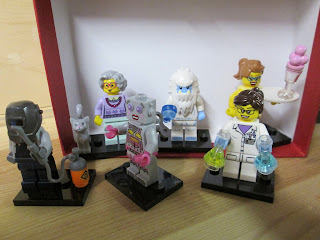 Whilst out shopping today I found these new Lego Minifigures. I knew that they were being launched soon, but thought it wasn't until September! Being a huge Lego Head, I spent quite a while squeezing the packets to try and find all the figures I liked best, though the box was almost empty! 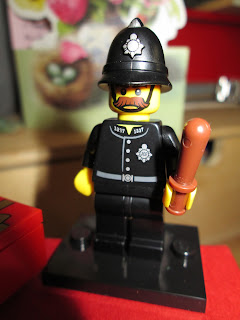 You can see that I still managed to get quite a few!! My favourite is this traditional British Bobby (I'm a sucker for a man in uniform!! if only they still looked like this!!) complete with truncheon! 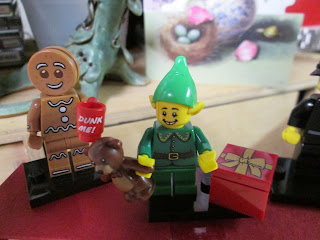 I also love the Gingerbread Man and the Christmas Elf (who will go nicely with the Father Christmas Minifigure I get last year). I never collect the full set of each series of Minifigures, I prefer to just try and find the ones I like most. I've done quite well with this set already, but there are still one or two I would like, so I will be back to squeeze and poke the little packets again very soon! LOL!