What HAVE I been up to?


OK! it is now officially the end of summer! British Summer Time has ended, and we are back to long, cold, dark evenings. The last time I wrote anything on this blog was way back in August! If you were to ask me what I have been up to during that post and this, I am not sure I would be able to give a reasonable explanation! I've been away on a little holiday at the end of September, and been to visit a few friends and family in that time, but miniatures have been put a little on the back burner.
I think, in part, it's because I wasn't able to go the the Miniatura show in September, and won't be able to go the Kensington Christmas Show at the end of November either; it has sort of blunted my enthusiasm a little.  Not that I have been entirely inactive on the miniature front... 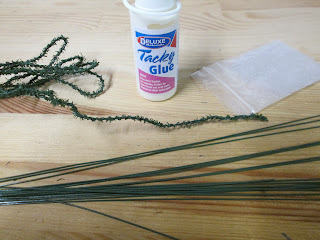 In my last post I mentioned some miniature projects that needed to be done before I moved on to other things. I have done a few of these, some not worth noting on the blog, but I have made some plants to go outside the pub, a project that has been waiting for a long time.  I decided that some lavender would look good either side of the porch entrance to the pub.

I took some simple things I had in my miniature stash, including some modelers grit, which was left over from my Miniature Garden Centre Wisteria kit. 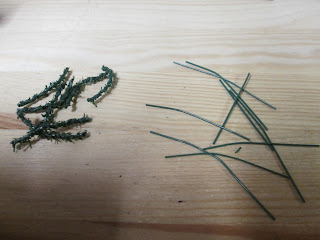 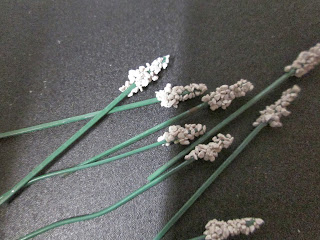 I then used the same principle to make lavender flower heads as were used on the wisteria kit, only kept a lot smaller (I think mine are actually a little too big to be accurate 1-12th scale, but don't think it really matters too much). this was done by dipping the wire into a drop of Tacky Glue then coating the glue covered tips of the wire into modelers grit. 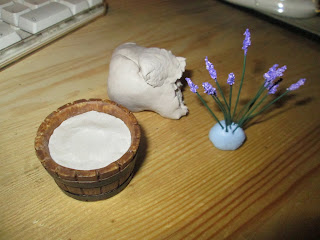 I then had to think about the colour! English lavender tends to look a bit grey, both the foliage and the flowers, however, a visit to the garden centre showed that there were several varieties of lavender, some with greener foliage and purple flowers, and that is what I opted for. I painted the flowers with two shades of lilac paint, first a light colour all over, then a darker one which I just dabbed on, and was quite pleased with the results. 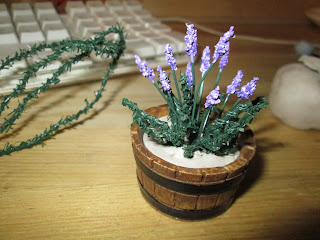 The final touch, still needing to be done is to add some 'soil' to the top of the Das clay. I bought some modeling material from the miniature garden centre, which is brown and passes for soil, but it occurred to me afterwards that the contents of a cheap tea bag might do the trick just as well! 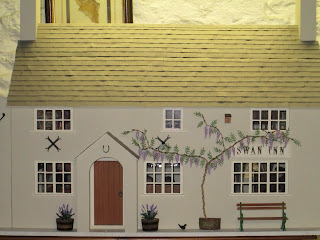 Here is a view with both tubs finished (except for the 'soil') sitting outside of The Swan, and which seem to work very well with the wisteria, which gave me the idea of making lavender in the first place! 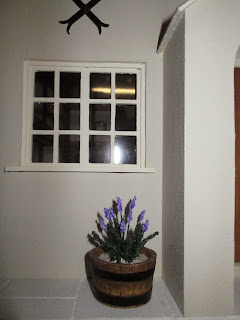 A closer view of one of the finished tubs. 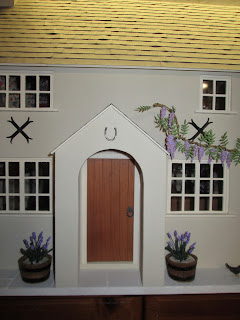 and here are the two, either side of the porch. 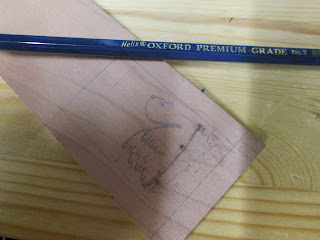 I've also started to make a sign for The Swan, to hand on the metal bracket I purchased a long time ago. This meant painting two sides of a piece of wood with two painting more or less identical. No easy task for me!! I drew what I wanted first of all to give me an outline to follow, I decided it would be easier to paint directly onto a piece of wood. 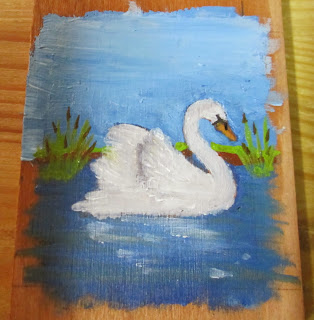 I then used oil paints, thinned with turpentine spirit, to create a swan swimming on the water. I am no great artist and found working in a small scale even harder, but was fairy happy with the result of the first swan. The second swan is now finished, and is not quite the same as the first one, but looks reasonably OK (sorry I don't have a picture of it). I know the bull rushes are not very good, but will mostly be hidden by the frame that will be used to surround each picture before the sign is finally hung in place outside The Swan Inn.

I will do my best to catch up with all your recent blog posts, but it takes ages for them to download onto my vintage Mac these days, which is partly why I have been so neglectful. I do hope you will forgive me!!