The Artist of Oz 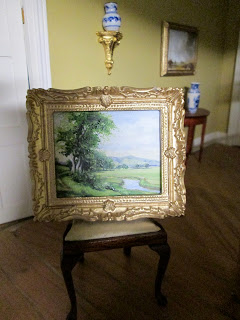 Last week a very special parcel arrived from the other side of the world (two in fact, but that is a whole other story!). Inside the parcel, carefully packed, were a host of heavenly gifts from Australia, sent by the angelic Fi apassionforminatures.blogspot.com

David has already posted about his special little gift from Fi on his own blog. I also received a lovely painting in miniature. A picturesque landscape full of amazing detail. in a delightful golden frame! 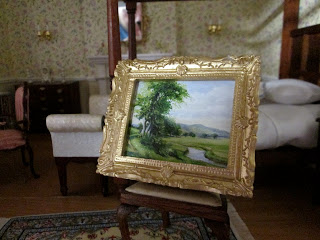 Once I had had time to take in the detail of the painting, and imagine all the hard work that went into it, I had to find somewhere special to hang it! Fi suggested that it was not quite right for an eighteenth century home, and might look good in the pub, but I was certain that it would look perfect in the Georgian house. I tried it in various rooms, resting on a chair, for want of an easel! 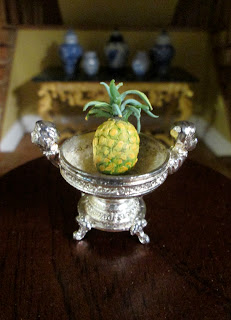 But the painting wasn't the only thing Fi had made for me! There was also this perfect pineapple, sent with a collection of other pineapple related gifts for the Big Pineapple. The miniature pineapple, or Little Pineapple, has been placed in the hall in a grand comport to welcome guests to the Georgian House. 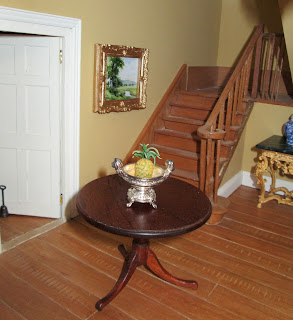 And I also felt that the landscape painting looked perfect in the hall as well, where everyone who came to the house would see it! 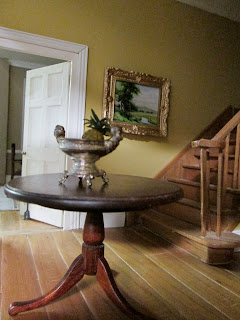 Here is another shot of the two gifts together, the pineapple does look a bit lonely in its great big stand doesn't it!! 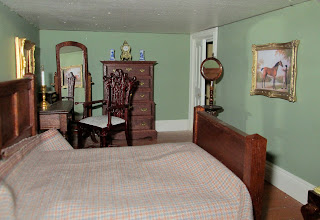 In putting Fi's lovely landscape in the hall, I was left with a stray Stubbs horse (always a problem!!). However, I soon found a new home for it in His Lordship's attic bedroom; it also meant I was able to replace the dull old painting that was there originally! 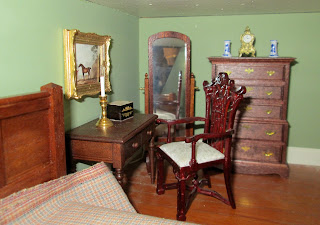 His Lordship seems quite fond of race horses and paintings of them, there is also a horsey painting above his dressing table. I'm not too sure about the chair in this room; a recent addition. It looked OK in the shop, but seems massive in this tiny room. I'm also not entirely happy with the colour of the wood. Still, it was a bargain, the shop was selling off its remaining Bespaq stock, and there were one or two other things I snapped up.

So, I would like to thank Fi for her lovely thoughtful gifts and show her that they have settled into their new home very well! Over the past couple of years I have been sent some amazing gifts and prizes from generous people all over the world, and I would like to take this chance to thank them once again, I have been touched by the kindness and generosity of my friends in Blogland!