Back from the Real World!!

Hello everyone!! Sorry to have been so quiet for so many weeks, but I have been flat out with things to do in the real world that the miniatures and blog land have taken a back seat. One of my tasks has been to redecorate my bedroom, which took a lot longer than I thought it would, but is now (almost) complete!!

Above is a photo of the rather scruffy piece of furniture I purchased recently for ebay. The picture really does it too much justice!! It was in a real state when we got it home (the top of the chest of drawers fell of as we were carrying it!!). However, there was something about its size, shape and nice cabriole legs that appealed to me - it had potential!!

So, after days of sanding and cleaning it up, priming and painting it, giving it some new handles and installing it in my bedroom, it now looks quite unlike its old self and is quite at home now. My own version of shabby chic, without too much shabby!! 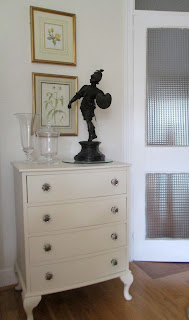 And here is the chest of drawers in its new home!!

I also need to say an overdue thank you to some of my blogging friends. Irene from Small and Stately
sent me a wonderful miniature spurtle, use for stirring porridge, along with its life-sized counterpart, when I won here blog give-away recently. She also sent me some Edinburgh Rock, which brought back some wonderful memories of my Scots grandparents. I have gobbled all the rock up now, hence why it doesn't feature in the picture!! 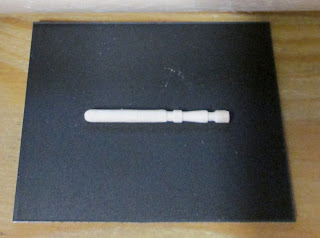 The miniature spurtle has been beautifully made and will be found a very good miniature home. Thank you Irene!

John from Merriman Park also deserves my thanks for very kindly sending me his very own Pretty Pleater!! Yes, Pretty Pleater herself! I will, once I have fully regained my mini-head, get to work with the Pretty Pleater and make some curtains for my dolls house. No excuses anymore!!

There are several other mini projects I am thinking about too!

I promise to try and catch up with all your recent posts, sorry I haven't made many comments recently, I am sure I will be back in full swing very soon.