Recent Purchases (and a Note of Caution!) 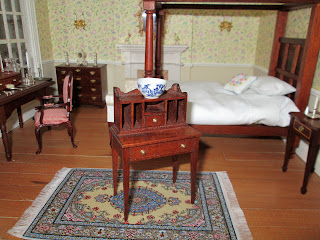 Hello! I was going to post a few pics of some recent purchases I had made at dolls' house shows and shops over the past couple of months. It occurred to me as I was taking the first few photos, that despite the fact I love all the things I have bought, I had mixed feelings when I actually got home and tried to place the items. I realised that I had been buying things simply because I liked them, and not because I had a place in mind for them in my dolls house. To put it another way, I was buying with my heart and not using my head!!

Take the first item I have shown you; the bonheur-du-jour, made by Escutcheon who had returned to Miniatura in Birmingham after a long absence, I saw a similar one in a book of dolls' house miniatures and had loved it, so when I saw this one, I snapped it up! It only really occurred to me later, back at home, that I didn't really have anywhere to put it! 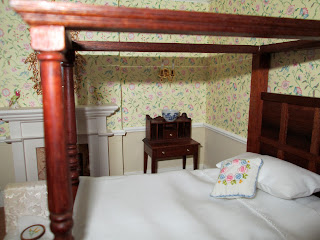 I have put it into the main bedroom, in the corner, but I had liked the arrangement I already had there, and the pink upholstered chair just didn't look good next to the bonheur-du-jour, so that meant rearranging the bedroom even more. 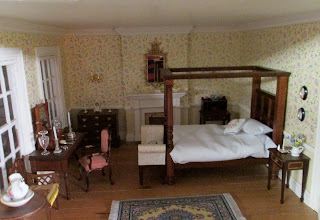 I have put the pink chair next to the dressing table, but am still not happy with the result, I think it doesn't work next to the chinese Chippendale chair. Or am I taking this whole thing way too seriously!?!! 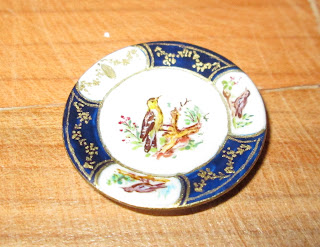 I also purchased this exquisite hand painted china plate (the photo really doesn't do it justice!) which came from Escutcheon too. Again, I have absolutely no idea where to put it! It still hasn't found a home and is currently sitting on the floor of the bedroom! 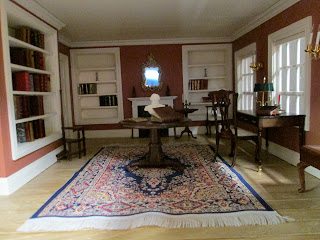 Another purchase made at Miniatura has ended up in the library, after much placing and replacing in different rooms! Can you see what it is? 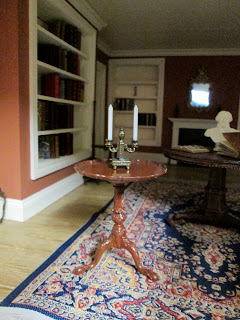 It's a beautiful pie-crust edge table, made by John Hodgson. I have an almost identical life sized version of this table in my bedroom, so knew I had to have it, trouble is, where could it go? Fortunately, I am happy with it being in the library, though it is hard to see all the fine detail on the table when it's so far back in the room. 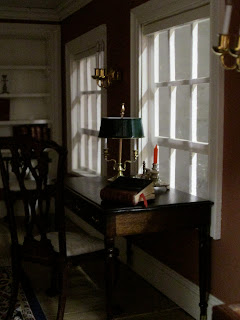 I bought a few more miniature books by Ellie de Lacy. You may have noticed the book shelves need a lot more filling!! I hope the picture above isn't too dark for you to see one of Ellie's books on the desk, which has a sweet little silk page marker! 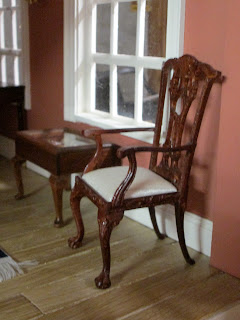 This chair was also added to the library recently, after sitting in the attic for months with nowhere to go! I bought it in a sale at a nearby dolls' house shop. It was only by chance that I noticed it matched a chair I had in the library already. so it made sense to put this with the other one!

I suppose this is really just a little note of caution, to think about where things are going to go perhaps, before rushing in to buy them. There will always be things that you buy simply because you love them, but you need to keep an eye on the practical side of things too sometimes!!

Or maybe I really am taking this whole miniatures thing far too seriously!!!!?