For my first book review I have chosen two books by Brian Nickolls; Making Dolls' Houses and Making Character Dolls' House, Both published by David and Charles. My reason for choosing these books first is that there are the books that all three of my dolls' houses were based on plans taken from them. If you have a keen eye, you will probably notice the houses I have built on the covers of the two books. 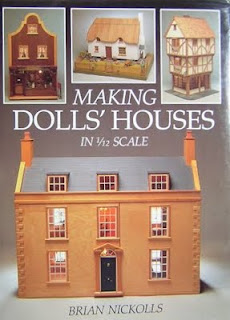 Making Doll's Houses contains the plans for the Tudor building, David's father built a copy of this house, and later I furnished the inside as a 1930's shop. 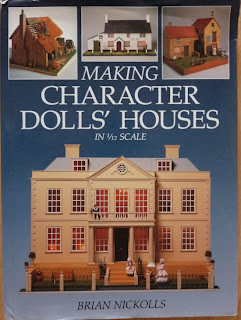 The second book, Making Character Dolls' Houses, was where I got the plans for my Georgian House and The Swan Inn. 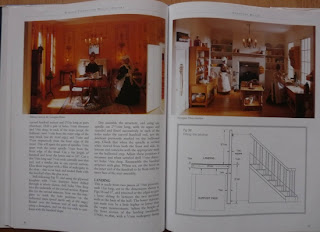 The books both contain detailed plans, and written paragraphs telling you how to complete each house, step by step. And there are pictures of the completed projects on most pages too, which helped me to visualise how it would all look when I had finished.

Building a dolls house following plans from a book has plusses and minuses; on the plus side, you can adapt and change things, you have all the measurements required along with the correct shapes the pieces that make up the dolls house should be, and a fairly useful guide to what has to be done, and how to do it. The minuses are that you have to measure and cut each piece (though commercially made doors and windows could be used instead and plans adapted accordingly), some of the instructions aren't so clear as they could be to a novice builder like me, and some of the projects require a level of carpentry skills that may surprise you (for example the Georgian House pillars and balustrades need to be turned on a lathe).

One thing I would strongly advise you to do is check the measurements and plans well before cutting, on the Georgian House  I routed out a groove in the base of the house, following the plan, only to find that the position of the groove was wrong, and should have been 9mm further forward, fortunately I spotted this before assembling the dolls house. The plans for the Swan Inn project also had a mistake in the position of the smallest window on the first floor.

Despite these small errors, both books give a wide variety of projects, and cater to newbies and experienced house builders alike. The projects are presented well, and are fairly easy to follow for the most part.

I would recommend these books to anyone thinking of building a dolls house from scratch. If you already have a kit house to build, these books won't be much use, though do give some useful tips on construction and tools required. They might also provide inspiration for current and future projects.

I believe that these books are now out of print, but many second hand copies are on sale. There are both hardback and paperback versions of these books available.

I hope you enjoy these books if you find them!