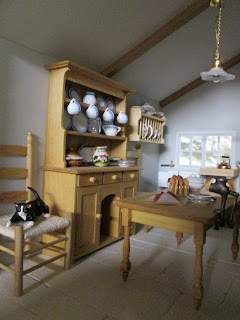 Apologies again for taking so long to make a new post! I thought it was high time I did something, so here are some new photos of The Swan. After the Christmas revelries went on in the pub for much longer than first planned, it is nice to have cleared away the seasonal nick-nacks and restored some sort of normality to the pub again.

In the picture above, you can see the kitchen is for another busy day of cooking and cleaning up. I have added a dish rack to the wall, which is an old McQueenie Miniatures kit originally bought to go into the big Georgian House kitchen, but was actually too big to fit in the place I wanted it, so had been left in mini limbo for ages, before finding its way into the pub kitchen. 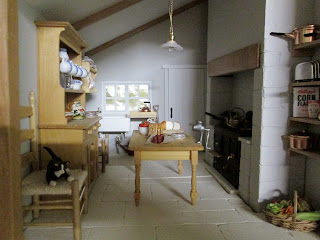 This is another shot of the kitchen, I wanted to try and show as much of the kitchen as possible in this photo. I am planning to make a small pair of curtains or a pelmet of red gingham to put up at the window above the kitchen sink because it will make the kitchen feel a little more homely; it looks a bit cold at that end of the room at the moment. 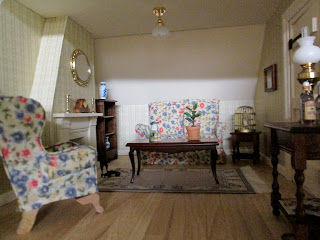 The sitting room upstairs is starting to look more how I originally intended it to look. The furniture I have in the room now, gives a comfortable, slightly old fashioned feeling that I was looking for. There's still a way to go with all the rooms in the pub, but I feel happier with this room now than I have in the past. The plant on the table was a little Christmas gift from David. The bird cage next to the sofa was another mini limbo item, which originally came with the mirror above the fireplace; a rare purchase by me from ebay! 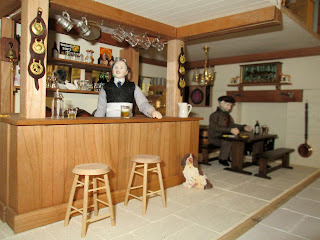 And here's a shot of the pub itself. almost the same as it was before Christmas. The bar stools are new, and as yet untreated, another little stocking filler. I'm not sure if I've mentioned the warming pan hanging on the wall by the fire. These were once filled with hot coals or water (I'm not entirely sure which, but maybe both) and inserted under the bedclothes to warm the bed; an early hot water bottle! By the 20th century these were more likely to be used as ornaments, and its the sort of 'Ye Olde Worlde' thing you'd have probably found in country pubs, along with old horse brasses, like the ones hanging on the bar.

The warming pan is one of several items I have purchase over recent months. I plan to do a post on some of the other recent purchases in a few days.

Until then, take care! xxxxx