In Britain there is a phrase we use which goes something like this ' You wait all day for a bus, and then three turn up at once!'. Well, I think that is something like what has happened on my blog, I've don't do a new post for over a month, and then do three in a week!

This post is part two of my list of recent purchases. This one focuses on things used in or around the kitchen, so there won't be any fancy gilding or Chinoiserie! 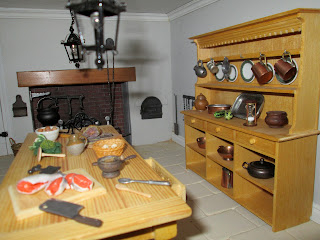 The first picture is a rather shameless, as there is only one thing in it which is new, and you would never guess unless I told you (which I will soon!), I just happened to think this shot was a rather good one of my Georgian House kitchen; which rarely gets seen. I love kitchens in dolls houses, they are always rather special, but they take AGES to fill up! Not helped by the fact that the kitchen/servants hall is the largest room in the whole house! You can see all the empty shelves still on the dresser, and the table looks full, but that is more of an optical illusion than anything.

As I mentioned in my last post, Tony Hooper was exhibiting in London for the last time in January (though the website is still open for a while) he was selling all his items at half price. I only discovered this when I was about to leave, as there were great crowds around his stall when I arrived, and I really don't do crowds! So much of his stock had gone, as had most of my ready money (Tony's stall was one away from John Hodgson's, which explains my lack of crinkle!) however, I bravely stood my ground and picked up a few little things to go inside my kitchen (and a few other things for a secret future project). The only new thing in the picture above, which was from Tony Hooper is the large pewter dish behind the marrows and hour glass on the dresser. I actually bought two of these dishes, the other is under the kitchen table. 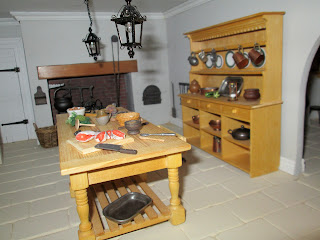 And just so that you get a more or less complete picture of the kitchen here is a photo of the opposite wall. 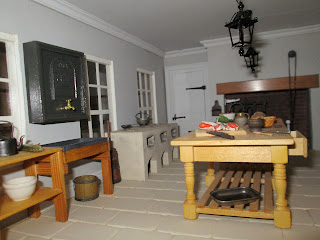 Ah! but wait, there is another new purchase lurking in the above image too, can you see it? It's another miniature from Tony Hooper... 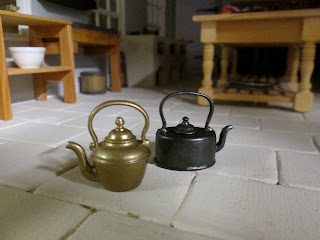 Well, yes it's the kettle, which is an unusual oval shape, and I thought looked suitable Georgian (though it may not be!) The 'brass' kettle was purchased from Kristin Baybars' shop; I have no idea of its maker, but it is nicely detailed. It lives on the range in the pub, and keen eyed bloggers might have noticed it before on previous pictures. 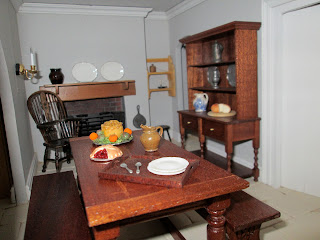 Here is my miniature version or Where's Wally. Can you spot the new things in this room? Ok, here's a clue, they are on the tray next to the plates! Two divine little spoons! This picture by the way, is the servants' hall. The servants' hall contain old fashioned furniture that once had pride of place in the old manor house that was demolished to make way for the new house! Not nearly elegant enough for an 18th century gentleman's home, so consigned to the servants quarters! ;o) 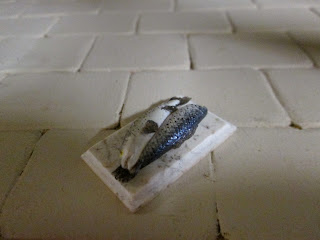 Another new purchase in the Georgian kitchen is this marble slab with wet fish. Made by Et Cetera. The fish are beautifully painted and have very fine detail, I think they are lovely! 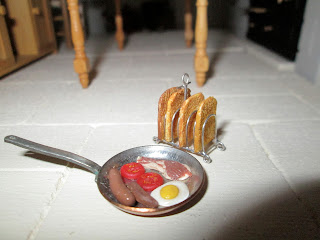 And here are some food items which are in the kitchen at The Swan. The toast rack has been mentioned before by some of you. It was again a miniature made by Et Cetera. The frying pan with full English breakfast on the go, was a nice find at Kristin Baybars' shop; I think they should have cooked the bacon a little earlier as it still looks a little raw, and the egg is almost done! Ah! I'm getting hungry now, and I don't even eat red meat!