When I had almost completed my Georgian House I started to buy things to go inside it. From the beginning I made the decision to buy the best pieces I could afford, and where money wouldn't stretch, make kit furniture and possibly make a few pieces myself. 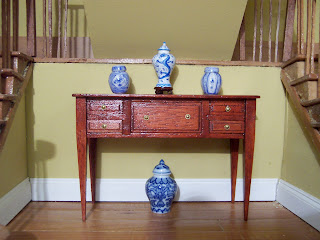 One of the first pieces in the house, the sideboard in the hall, was made from a kit. I hadn't made a kit before, and was fairly pleased with it for a while. But I used a stain that wasn't appropriate, small patches of bare wood were left in places where the stain didn't take because of the dried glue. and the drawers didn't pull out very well or got stuck completely. Whenever I looked at that piece of furniture it reminded me of how I had leapt into a huge project with no previous woodworking skills or miniature experience. It always looked ok, but I always wanted something a bit better!

In January I went to a new dolls' house exhibition in London, held at the Tower Hotel in the east of the city, near (yes, you've guessed it) The Tower of London and Tower Bridge. The show was set up by the same people who organise the Kensington Dolls' House Festival, and was fairly good, though not quite as good as I was expecting. I bought a few things at the show, and will show you some of them further down this post, but first I wanted to show you what I have finally bought to replace the sideboard in the hall. 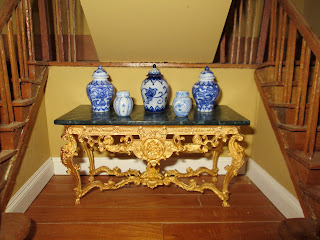 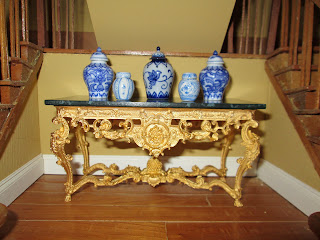 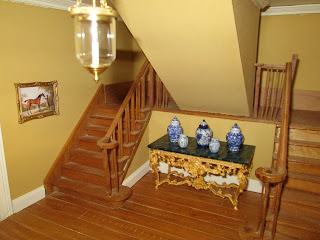 Is it too ostentatious? I think it works quite well.  If you haven't guessed already it's made by John Hodgson. I'm not sure if you can see it, but in the centre of the base is a pineapple (I had to smile when I saw that Fi, especially after all those wonderful photos you sent!). it is made from gilded pewter with a faux marble top, hand painted by John, and signed underneath by him. Perhaps it would look more at home in a Mulvany & Rogers house than sitting next to my wonky (and rather dusty!) stairs?  What do you all think? 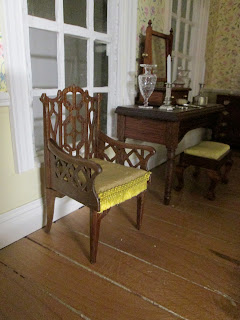 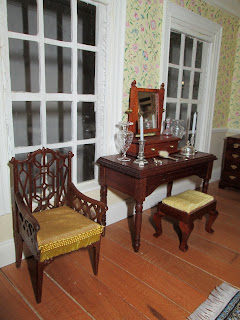 I also purchased this Chippendale style Chinoiserie chair for the bedroom. It is made by Masters' Miniatures, and the yellow silk upholstery was perfect for the bedroom. As i mentioned in a post months ago, I saw a bedroom with Chinoiserie decoration at Blickling Hall in Norfolk whilst on holiday last year, and wanted to get a few pieces in the Chinoiserie style for my miniature bedroom, so was thrilled when I found this chair! 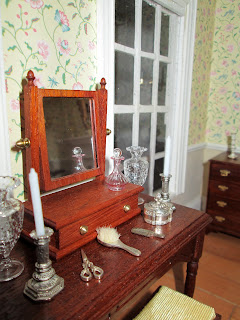 You can just about see it reflected in the mirror! The silverware on the dressing table was all from Simply Silver, who I believe have now retired. Quite a few makers seem to be giving up the shows lately. Tony Knott seems to have retired, and both Et Cetera and Tony Hooper gave their last shows in London last month. It's all rather a shame, but I hope they are all relaxed and happy!

Back in November I again went down to London. That time I visited Kristin Baybars' shop in Gospel Oak again. I posted about my last trip ages ago, when I ended up in Stratford by mistake! this time I arrived without issue, and picked up some nice little bits and pieces. Most of what I bought was for the Christmas project in The Swan (it's also where I got the warming pan mentioned in my last post!), but I did manage to find this rather lovely little bowl. 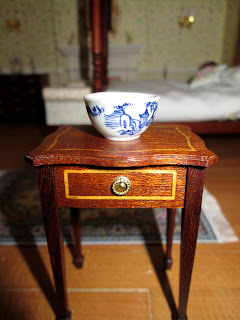 It was made by Muriel Hopwood (I know this because it is signed by her) and is a rare find as she has almost stopped making miniatures, though I am lucky to have some of her recent pieces picked up from an online miniatures shop. This delicate little bowl also fits the chinese theme I want to give a hint of in the bedroom. When I find the right sort of wash stand (or make one!) this will probably sit on it, as Georgians didn't really have matching ewer and basin, and the basin was usually fairly small in comparison to Victorian ones.

Going back to Kristin's shop was fun. It's such a great space for rummaging! When you first arrive you think you'll never find a thing as it looks so jam packed and jumbled up. But actually, things are stored in drawers and cabinets in a fairly logical order, one for plates and cups, another for pans, another for food, another for cleaning products etc etc, there are tiny drawers filled with even greater treasures. The best thing is that Kristin doesn't get rid of things, if something doesn't sell, it remains on sale until it does, so you might well find little things from makers who have long since retired, like my Muriel Hopwood bowl.

I took some photos of the shop to give you some idea of how it looks inside. If you do get to go there (it doesn't look much from the outside, but don't be afraid to ring the bell!) ask to see the Dog House, which is a charming house occupied by dozens and dozens of dogs in each room, and is great fun! There is so much to look at you'll need a good couple of hours; they might even make you a cup of tea!

I will do another post very soon on some other little purchases, which have been housed mostly in the kitchen!