Inside The Swan: The Public Bar 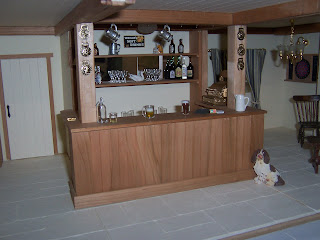 Well I suppose now is as good a time as any to show you what The Swan looks like inside; there's still not much furniture inside, but enough to give you some idea of how it will look eventually. The picture above is the bar itself, which I have made using American cherry wood, which gives it a lovely warm glow. I need to get some beer barrels set up behind the bar, which will fill the space below the shelf with the mirror. I am also looking for some empty beer glasses to hang from the hooks above the bar, so I will be scouring the miniatures fair in Birmingham later this month trying to find them, although I have have seen some online. I'm not sure whether the bottles of spirits are actually true to scale, because I also have some smaller ones, but they look OK, so I've left them there. 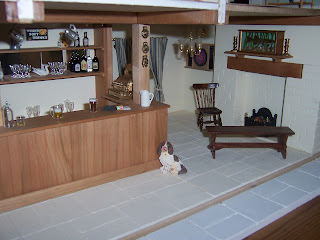 I'm hoping that the bar soon won't look as spartan as it does right now. The bench is actually borrowed from the big house, but the chair was a lucky find and is staying somewhere within the pub. You can probably just about see the dart board on the wall. It was from Warwick Miniatures, which is now owned by Phoenix Models, I made the wooden surround for the dart board myself. I wanted The Swan to be a country pub, so am looking for suitable Huntin',Shootin', Fishin' objects to display inside. The fish trophy in a case above the fire is from Mouse House Miniatures. It looks a little cold on this side of the pub at the moment, the fire will eventually glow, and I'll look for some suitable fireside objects to liven it up too. I'm also going to tone down the stark white ends between the wooden beams on the ceiling. 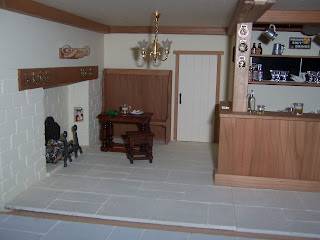 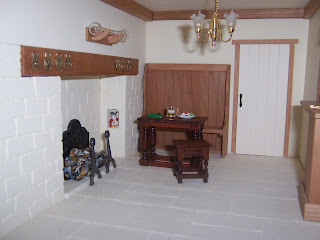 This is the other side of the bar, which has a larger fireplace. In the original plans for the pub, the fireplace is deeper, but I wanted to make a kitchen on the other side of this wall, so made the depth of the fireplace a bit narrower, I don't think it looks too bad. The door is a dummy, but would lead to a corridor and kitchen I suppose if real. This side of the bar does at least have a table! I made the settle standing behind the table, again from cherry wood.

So there we go, it's still got a long way to go, but I think you get the general idea of what I want the pub to look like. It's going to be set in 1930's I think, maybe early 1950's. I don't want any fruit machines or juke boxes, and if it serves food at all it will be rabbit pie, rather than gastro-Euro-fusion stuff!! ;)
Posted by Andy at 17:52