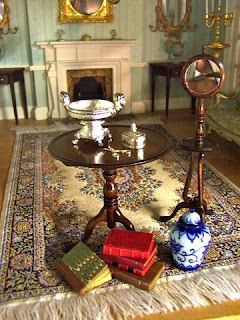 Had a good time at the Miniatura show in Birmingham this weekend. It seemed very busy, and there were plenty of traders there, though perhaps not as many as there have been in previous years. I don't that mattered, it still took a long time to get around the whole exhibition, and I was exhausted by the end!

Pictured above is a selection of things I purchased for my Georgian dolls house. The exception being the Chinese vase by Muriel Hopwood, which I actually purchase a little while ago, not in Birmingham, but it is Muriel who organises the Miniatura shows. 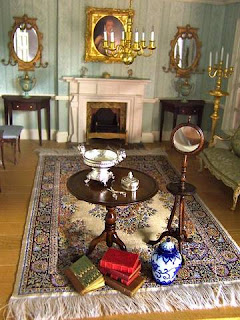 The mahogany tilt-top table is by David Booth, and will replace the table currently in the drawing room, which will move to the attic space between the two bedrooms. The gentleman's shaving stand with mirror is also by David Booth. 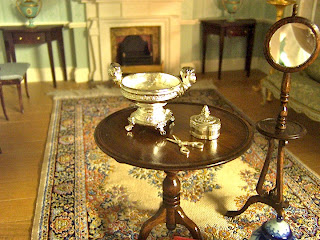 On the table are a little trinket box and a pair of scissors, which open and close!! Both made of Stirling Silver, by Simply Silver. The large comport is not silver, it was purchase from Karen Kirby of Karen's Miniatures (www.karensminiatures.co.uk). She had one of these comports filled with a pyramid of oranges, which looked fantastic, but I thought I would like to use the comport to create some sort of floral display in the hall, we shall see!! 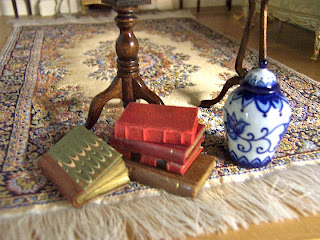 The books are by Ellie de Lacy. Only the one with the marbled cover is an actual book, the other four stacked up are dummy books, which I hope might fill my shelves in the library a little quicker!! As I mentioned before, I didn't actually buy the vase at Miniatura, but I wanted to show you it anyway. It's a Ming style design by Muriel Hopwood, and is one of two vases I bought recently, made by her. 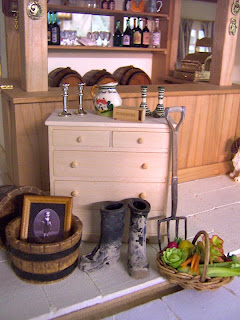 I went to the Minitura show with a clear idea of what I wanted to buy for the pub; tables, chairs, stools, glasses, etc etc. As you can see I cam home with completely different things!! I think the beauty of dolls house fairs is that you see things that you wouldn't normally see, made by specialist craftspeople. I know I can get chairs and tables anywhere, and have seen glasses available online, so it's perhaps not so surprising that I came home with more unusual items! I did buy plenty of pub related stuff, you might just be able to see the three barrels behind the bar, which I bought from Sussex Crafts, and also the beer taps to go with them! I bought some more stock too, which is now also stored behind the bar. The Chest of drawers is great, just the right size for the pub bedroom, so the owners at least have somewhere to store their clothes now, even if they haven't got a bed to sleep in yet! I saw the garden fork and had to have it, its been given just the right finish to make it look weathered and used, and goes perfectly with those muddy wellies, which I thought were great fun! Both made by Pride of Plaice. 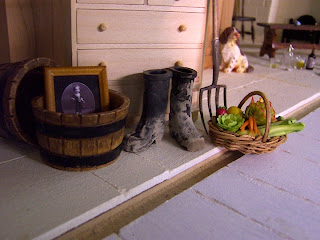 Thees a basket of fresh garden produce too, although it does seem a little too clean to have just been dug up in the garden! The half barrels will be used as planters outside the pub, on either side of the porch, and there's also a little photo of a child to fix to a wall somewhere upstairs. 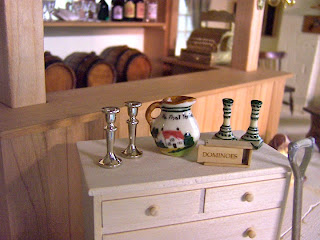 A few other little bits for the pub owners, a pair of silver (not sterling) candle sticks, a delightful fair of green Delft style candle sticks for the bedroom and a lovely cheerful jug, to go on the dresser in the kitchen. All made by Cornish craftspeople and available from Meadowcroft Miniatures (www.meadowcroft-min.co.uk).
The dominoes box will go in the pub. it has a sliding lid, but alas no dominoes at present, I shall make some from black card to go inside.

That's about it, I bought one or two other little bits, and some fabric to make future bed covers. One other thing I did buy was a second hand book from the charity stall. 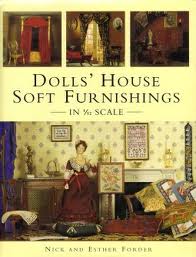 It's a great book, filled with some really good miniature projects that I am determined to try! These include a tapestry rug, bed clothes, two fire screen designs, a cushion, a needlework sampler and much more!! For someone scared of a needle and thread this book comes as something of a revelation!!!