My Latest Dolls House Project: Welcome to The Swan Inn 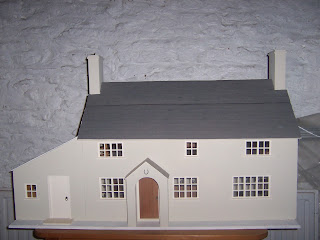 I finally feel ready to unveil the latest dolls house project that I have been working on for the past year. It's been sitting in the cellar with me for most of this winter, and I haven't done much with it for a while. It is an English country pub, based an a design plan taken from Brian Nickolls' book Making Character Dolls' Houses, the same book that I got the plans for my Georgian House from! Just like the Georgian House, I have adapted the plans slightly and made some changes that suited me. 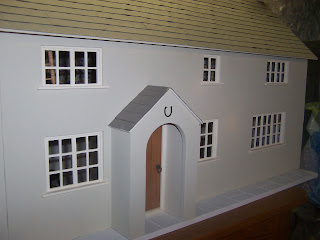 I have enjoyed making this dolls house, and can certainly see a marked improvement in my woodwork skills between this one and the Georgian House I built first. It's neater, with a crisper finish. I chose a simple off white colour for the exterior, The colour you see is actually a second choice, as the first paint I used looked almost the same as the colour I had used on the window frames, and I wanted a bit of contrast. All the main construction of this house is now finished, it's just the details I need to work on now, a pub sign, painting the stone flags in front of the pub etc. I also want some flowers outside, Brian Nickolls' design has a small garden outside the pub, but I don't have room for one at the moment, so will maybe have some potted plants. I am also trying to make a wisteria to climb the wall outside the pub, so that might be something you'll see later. Whatever I decide, I do think the exterior needs a little more added to it to bring it to life. 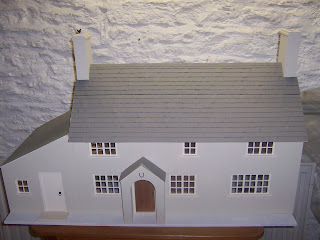 This pub has appealed to me since I saw it in the book when I was building my bigger Georgian House. I love buildings like this, you find them all over the UK, vernacular buildings not designed by architects but by builders and masons, and often with regional variations, but no less attractive than much polite architecture. I have seen buildings similar to this one in Dartmoor, the windows on the upper storey are very low, almost level with the floor. The extension at the side of the pub was originally a stable on Brian Nickolls' plans, but I didn't like it, so changed the design slightly to create a kitchen area, which I have already posted back in January, it's still one of the most complete rooms inside my pub, but I will show you more of the interior in a later post.

I did think of giving my pub another name (Brian has called his pub The Swan in his book) and toyed with The Fox, or the Red Lion, but actually I quite like The Swan, and so the name stuck!
Posted by Andy at 19:49