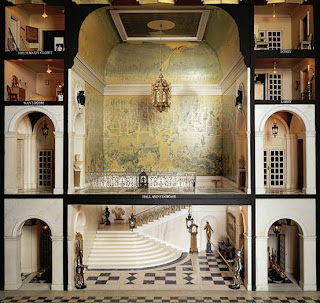 Queen Mary was a well known collector of antiques and loved miniature objets. It was Princess Marie Louise, granddaughter of Queen Victoria, and friend of Queen Mary's who first thought of producing a dolls' house for Queen Mary, in 1921. Princess Marie Louise had many friends in the art world and approached the architect Sir Edwin Lutyens with her idea. Together they set up dinner parties to raise support and funds for the project. With Queen Mary's blessing , it was decided that a house would be built for the British Empire Exhibition, held at Wembly Park in 1924. The exhibition was set up to show off the best in science, arts and manufacturing within the Empire. It was thought that the dolls' house project would be a great way to promote British artists, craftsmen and designers, and more that 1500 people would eventually be involved in completing the project. That number included many famous artists, writers and manufacturers of the period.
The house was displayed in the Palace of Arts at the Exhibition, with money raised going to support Queen Mary's various charities. 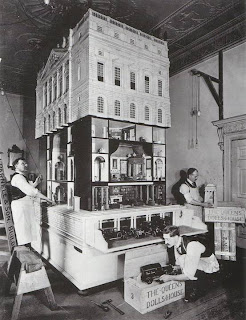 The dolls' house is unusual because the exterior of the building is raised entirely to reveal the interior within. The rooms are displayed on all four sides of the house and has many connecting corridors and staircases to link the rooms together, just like a real house! 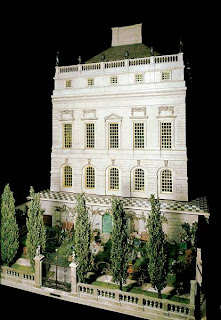 The house is finished in a classical style, and is in one twelfth scale. The roof is covered in real slates and real marble was used in the interiors too. On one side of the house there is a pull out drawer revealing a miniature garage, on the other side another drawer is pulled out to reveal a tiny garden designed by Gertrude Jekyll. 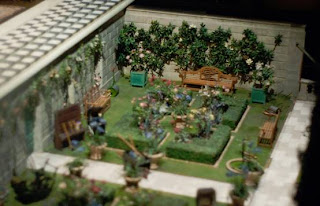 The garden comes complete with miniature tools. There are little birds nesting in the trees and a tiny snail crosses the garden path. 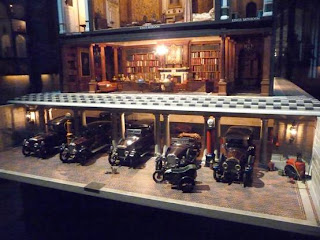 The garage has perfect copies of the motors of the day,  there's also a Rudge motor bike and side-car and a bicycle.There are even petrol pumps and tiny cans of oil. 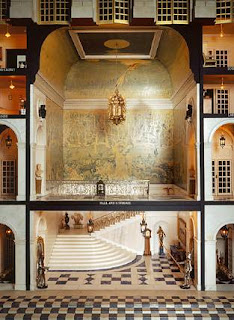 The Grand Entrance Hall and Staircase are finished in real marble. The painting on the landing walls is by William Nicholson. It depicts Adam and Eve being cast from the Garden of Eden. 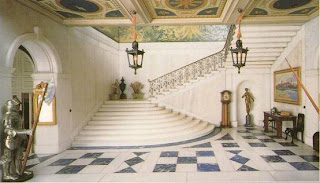 The Hall ceiling, just visible here, depicts the Zodiac. The long case clock, along with many other clocks in the house was made by Cartier!! 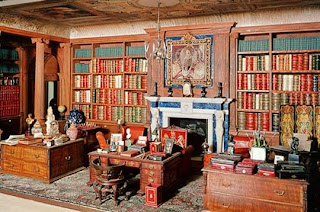 The Library furniture, panelling, columns and bookshelves are all made from Italian walnut. Each of the books on the library shelves was written by a well known author of the time, including WS Maugham, Arthur Conan Doyle, Rudyard Kipling, CFA Voysey, JM Barrie, Hilaire Belloc, Arnold Bennett, Joseph Conrad, Thomas Hardy, AA Milne,  Aldous Huxley, MR James, Hugh Walpole and Vita Sackville West along with many others. There are also miniature stamp albums, sheet music and newspapers. The two cabinets at the front of the room contain tiny drawings and paintings of over 700 artists!! 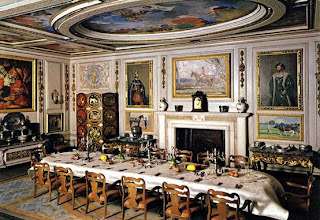 The Dining Room has a table and chairs made of walnut. The table can extend from 5 inches to twenty inches. The screen, which hides the servants entrance into the dining room, was made by Cartier.The linen table cloth was made in Belfast and is an exact copy of a table cloth used in Buckingham Palace. Much of the silverware was made by Garrard and Co. A fine dinner service was also donated by Doulton. 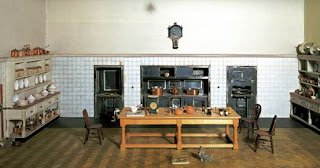 The Kitchen has an amazing wood block floor, made from over 2500 tiny pieces of wood. The kitchen is equipped with a large range, with a separate hot plate and pastry oven on each side of it. There are plenty of copper kettles and pans along with many other utensils. There is also a calender on the wall by WH Smith! 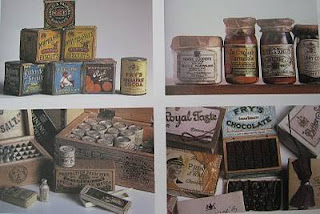 The kitchen and pantry are filled with a wide variety of grocery and provisions, all in perfect packaging. Tiny jars of Tiptree Jam and Frank Cooper's Marmalade, boxes of Cadbury's chocolates, tins of Fry's Cocoa, McVitie's biscuits, Colman's Mustard and packets of Rowntree's toffees and sweets available to tempt the miniature inhabitants! 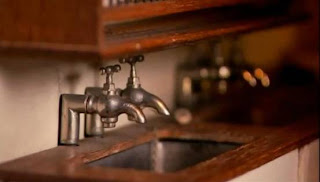 The whole house was plumbed with running water. The taps designed to turn the water on and off just like their full sized counterparts. The house was also fully wired for electricity. 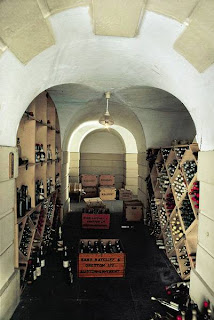 Like any other English Country House, Queen Mary's dolls' house comes with a well stocked wine cellar. Each tiny bottle of wine contains a small sample of what is on the bottle's label, there are also bottles of beer, champagne and spirits. 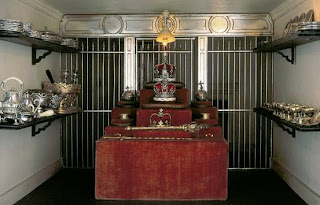 There is also a strong room for storing all the fine silver and plate safely, this house is more unusual in that it also stores miniature copies of the Crown Jewels! 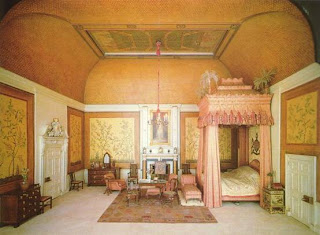 The King's Bedroom is on the first floor, It is the central room in a suite, which also includes a dressing room and bathroom. The bedroom is dominated by the state bed, with beautiful silk damask, and a finely embroidered royal coat of arms, donated by the Royal School of Needlework. The wall panels are decorated with delicate Chinese style birds and flowers. On the ceiling there is a trompe l'oeil panel of columns and trellis work  The flowers and trellis they are growing on are arranged to form the first musical lines of the National Anthem!  There are two beautifully finished Queen Anne chairs in this room too, which I absolutely love! 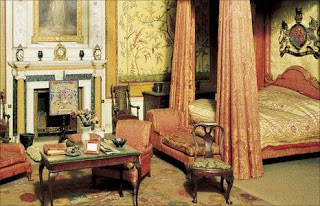 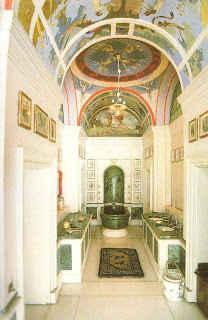 The King's Bathroom is finished in beautiful green and white marble. This room has tiny tooth brushes, bars of soap and a flushing lavatory! 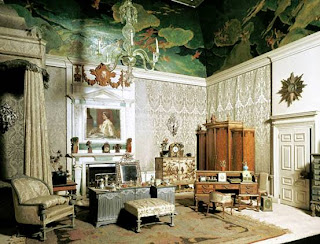 The Queen's Bedroom, is also part of a suite of three rooms. This room is finished in grey damask. this is one of my favourite rooms in the house; maybe it's because there is a mirrored ceiling! ;)  The dressing table has trompe l'oeil painting of silk drapes, and a beautiful toilet set in silver. I have read that the bed curtains were carved in wood, and then silk damask glued over the carved wood to keep it in its place. This room also has a lovely writing desk, with all that was needed, and another clock by Cartier on the mantelpiece. 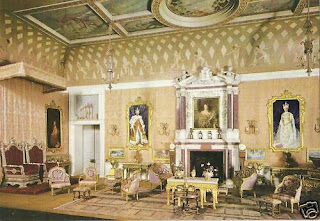 The Saloon is the largest room in the house. Under the silk canopy sit two thrones. There are portraits of both King George V and Queen Mary on either side of the fine marble chimney piece. The ceiling was painted by Charles Sims it depicts 'The Children of Rumour with her Hundred Tongues' (a warning against gossip!) The sofas and chairs are upholstered in fine Aubusson style tapestry. There is also a piano designed by Lutyens and made by Broadwood and Sons Ltd. 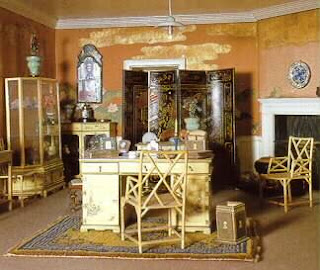 This is the Queen's Sitting Room, on the second floor. It is furnished and decorated in a Chinese style. the walls are painted by Edmund Dulac, with water lilies and golden clouds. The glass cabinets are copies of those used by Queen Mary and are filled with miniature carvings in jade and amber alongside small ceramic ware pieces. The chairs are carved and painted to simulate bamboo. 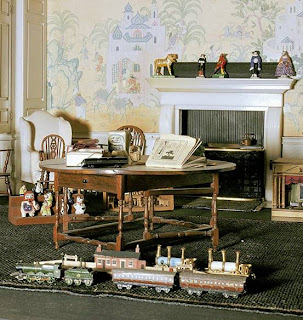 The second floor also houses a day nursery, night nursery, Princesses bedroom and servants rooms. The day nursery above is filled with toys and games and miniature children's furniture. The walls are decorated by Edmund Dulac with suitable fairytale scenes. 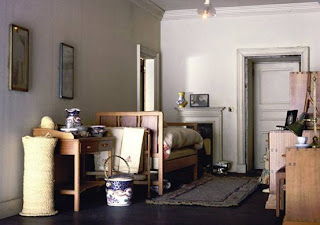 The house includes bedrooms and a bathroom for servants, tucked away in mezzanine floors, the furniture used in these rooms was simple and modern for the time, produced by Waring and Gillow, who made furniture in full size too.
Details:

There is a great website which allows you virtual tours of some of the rooms in the house, and close ups of some items featured in the house, including the items pictured above!