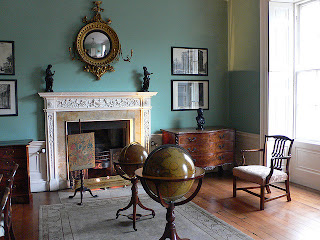 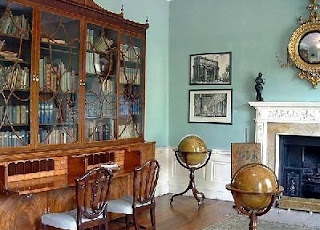 The library above is in the Georgian House in Bristol. The 18th century was the 'Age of Enlightenment' and  any gentleman would be keen to show how well educated and 'enlightened' he was. The library was the perfect place for this to happen. The library as a room in its own right began in the 18th century country houses of the wealthy. Books were still quite expensive at that time, and would usually be beautifully bound in leather with gold embossing. Furniture builders began to design new pieces of furniture to house a gentleman's growing number of books - the book case was born! glass doors kept the books clean, and would often have locks to keep them safe too. But the library wasn't just for housing books, a gentleman would also keep maps (also expensive) and at least one globe, if not a pair, along with telescopes and microscopes. A gentleman was also expected to know about architecture (classical orders etc in keeping with the tastes of the age!) and copies of works by Vitruvius and Palladio would almost certainly have been amongst the books on the shelves, along with a copy of Vitruvius Britannicus by Colen Campbell. They my well have kept architectural plans and drawings on display in the library too. Other paintings and drawings would have been stored or displayed in the library. Display cases may have been used to show off curios or natural wonders collected on the gentleman's travels too. The library might also have housed games and other pastimes, chess boards for example and in the very grandest houses a billiard table, which was growing in popularity in the mid 18th century, but a billiard table would have been purchased at an astronomical price, like having a Ferrari parked in your house!! (it wasn't until later in the 19th century that the billiard table got a room of its own!). 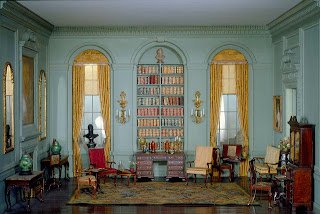 This is a picture of the English Library in the Thorne Room collection
Posted by Andy at 16:31