Progress at The Swan Inn

Hope that you are all well. I have been working a little on the Swan Inn,  I'm trying to fill it up with miniatures and am currently working on some signs to go on the front of the pub.

In the mean time, I thought I would show you some pictures of the progress made so far inside. 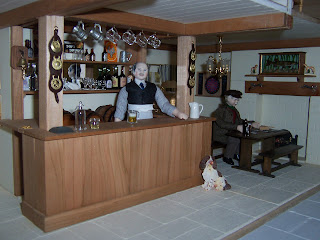 I felt the bar needed some life, so I bought two small figures at Kensington. They are by Woodside Dolls (www.woodsidedolls.co.uk). I like the barman with his bald head and flushed cheeks, who has a nice long apron on too. The other chap, seated by the fire (which still needs a little sooting up!!) is playing a lonely game of dominoes, as I found some miniature dominoes to go inside the empty dominoes box I bought back in March. I also found some empty beer glasses to hang above the bar, and some lovely martingale horse brasses from the Luggage Lady, who makes beautiful leather luggage and sundries, but sadly has no website!

Ah yes! there is also  bit of furniture in the pub too! the table and benches were made by Sandy Eismont (www.eismont-dollhouse-miniatures.com).

I also took some pictures of the pubs accommodation. It is still not fully furnished, and I have put some odd bits inside to fill it up a bit, but they may not stay there for good, but give you an idea of what the will look like in the future. 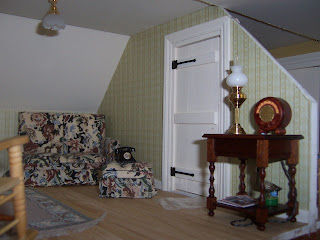 this picture is the living room. The sofa is ghastly! it was given to me by a friend, and I plan to recover it, as I like the shape of it. It comes with a matching footrest, so that will need recovering too. The round wireless on the table and the telephone are both by Truly Scrumptious (trulyscrumptiousonline.com) who do some amazing and unusual miniatures, and the details they include have to be seen to be believed!

As this is the first time I have shown the upstairs rooms in the pub, I should mention that there is a fireplace on the wall opposite the door. This room will eventually have a slightly chintzy 1930s feeling, with the odd bit of art-deco thrown in (more Woolworths than Cartier though!!). 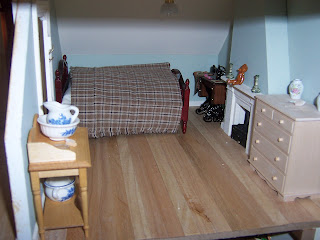 Excuse the slightly odd angle of this room in the picture; these rooms are actually difficult to photograph without loosing a large part of them. The bedroom is the same size as the living room ( they are separated by  a landing). I will be keeping the washstand, and the chest of drawers, which has been treated since this picture was taken and now looks more like pine than lime wood. (the dressing table set from Carol can just been seen on the chest). The bed is NOT staying as I don't like it! I had toyed with the idea of painting it, but we shall see, I am either going to make something, or hope that something suitable turns up somewhere. I will be keeping the fabric on the bed, which I think is perfect for a blanket. I'm not sure the sewing machine is staying either, but it fills a space. I made the fireplace, which is identical the the one in the living room.

Both of these rooms look a little cold and impersonal at present, I am working on making the pub itself look lived in first, and only buy things for the accommodation when I see things I like for the right sort of price. 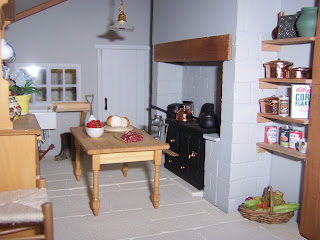 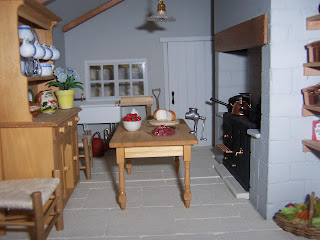 You might have seen the kitchen before. I have found a few new miniatures for it, but it's still a work in progress. I have a dish rack that will be fixed to the wall soon. It was originally bought for the Georgian house kitchen, but silly me, I forgot to measure it, and it was too big, so into the pub kitchen it goes instead!
I also want a little curtain and maybe a shelf go go above the window, I liked what Fi did with her kitchen so might look to 'borrow' her idea!!! ;o). I need to finish the wiring too, so (hopefully) the lights and fire places will all work.

So there we are! Still a long way to go yet, but progress none the less!
Posted by Andy at 21:51