Getting up to date! 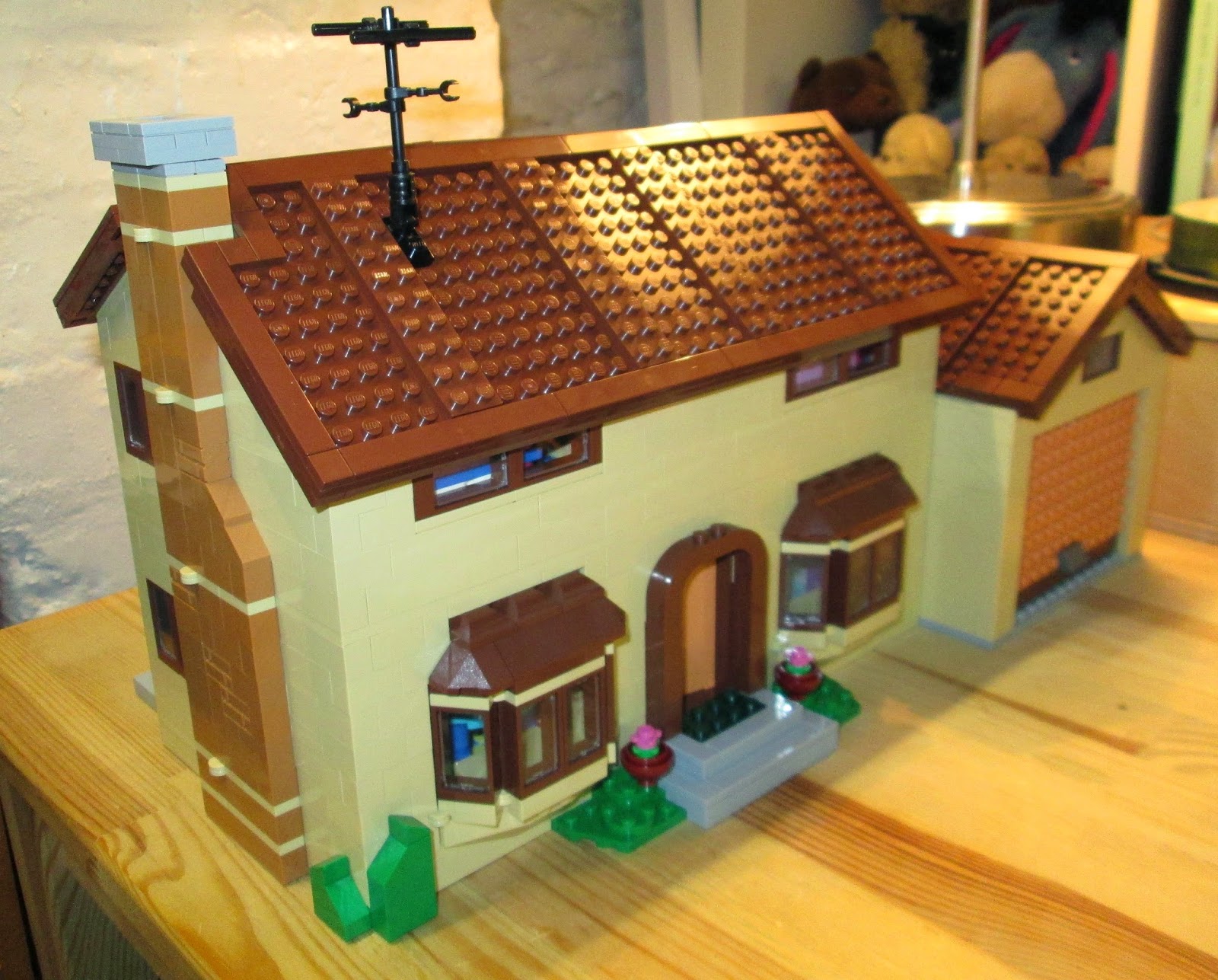 Hello! Does anyone recognise this house? The occupants are quite well known around the world.  Here's a clue; LEGO have rendered it in 3D, but it is usually seen in 2D! 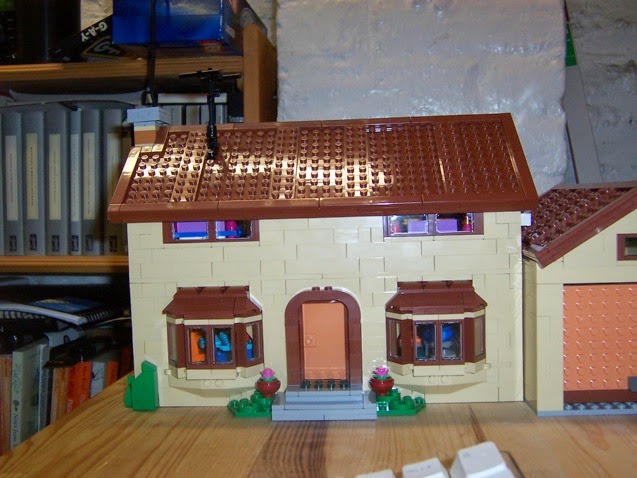 Is this picture any better? Have you guessed? 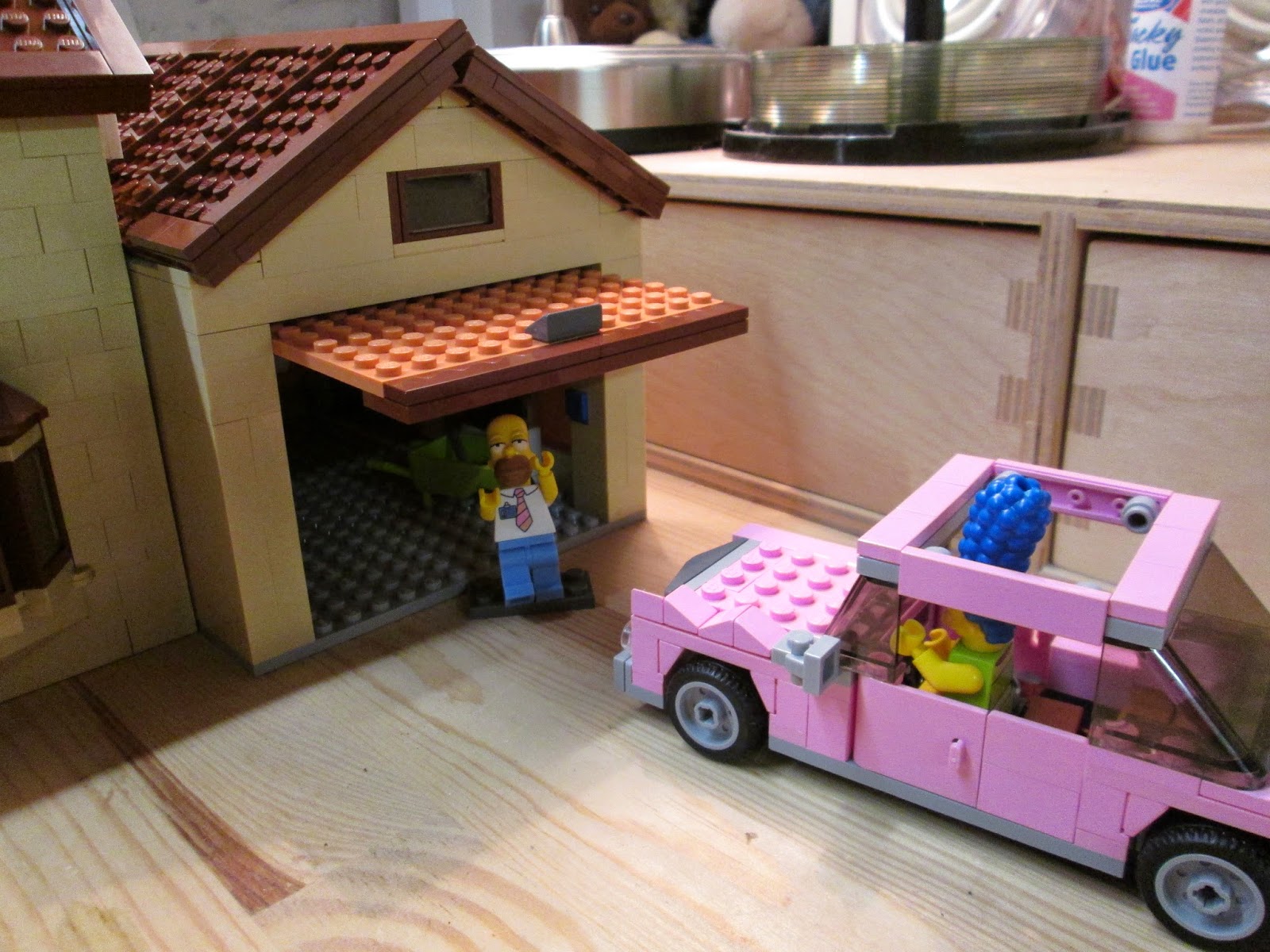 Well, I am sure it was no surprise to most of you that it is,of course, home to the Simpson family! Here is my rather poor attempt to recreate the action during the opening credits! 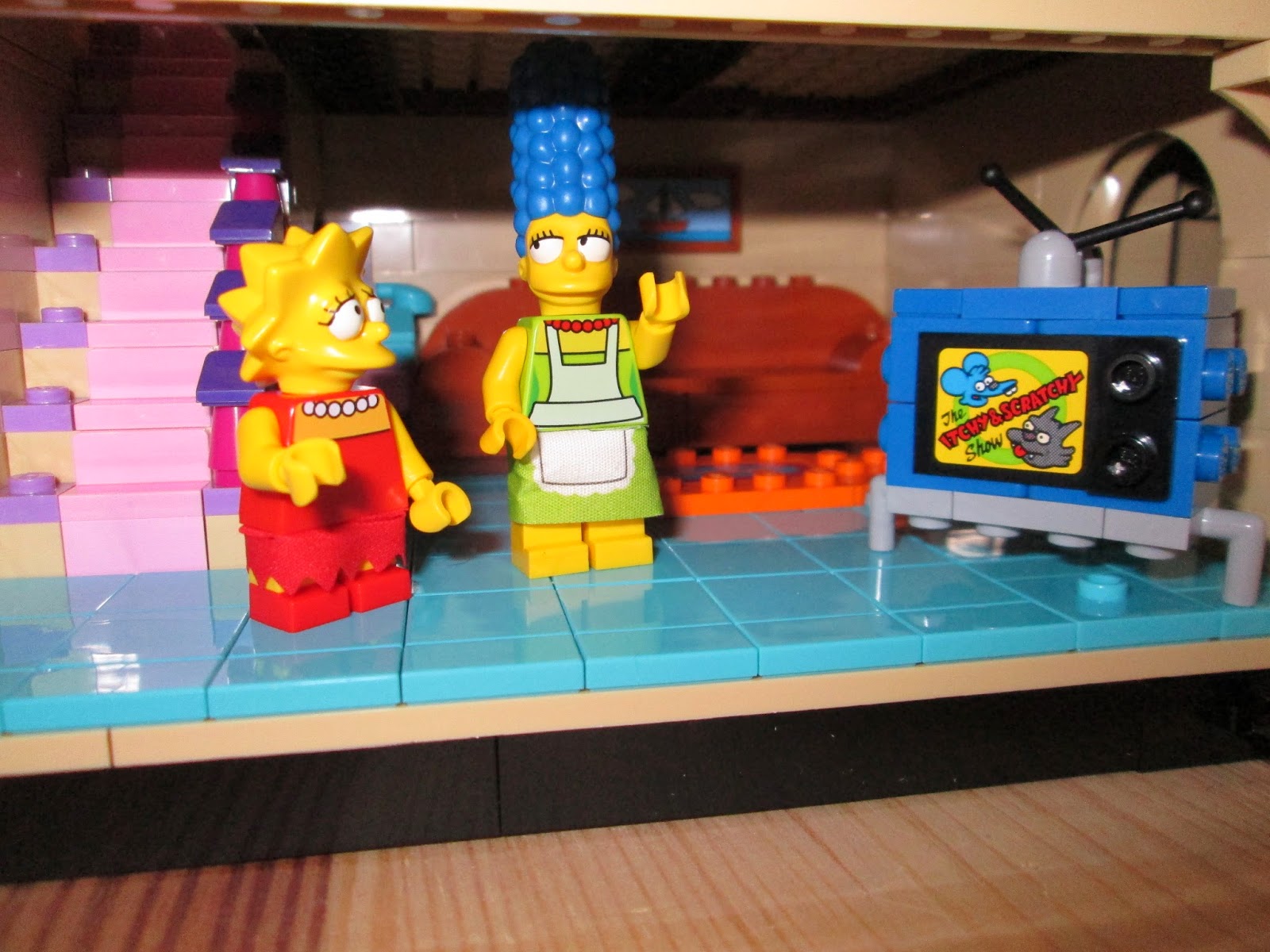 The whole family have been created as LEGO Minifigures, including Ned Flanders, the next-door neighbour. You can see the famous sofa in the background, and the TV is showing an episode of Itchy and Scratchy; Bart and Lisa's favourite TV show. 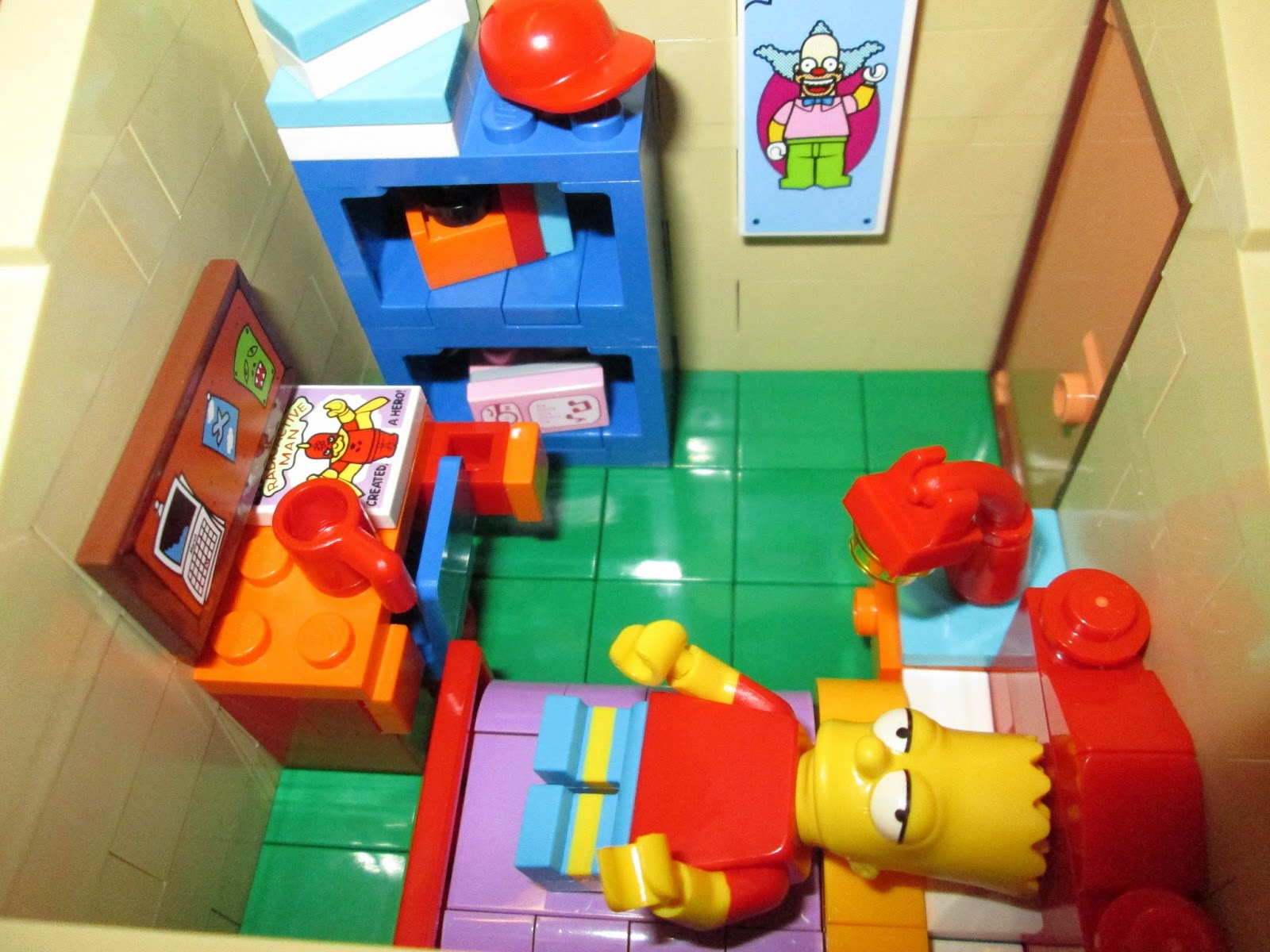 And here is Bart in his bedroom. 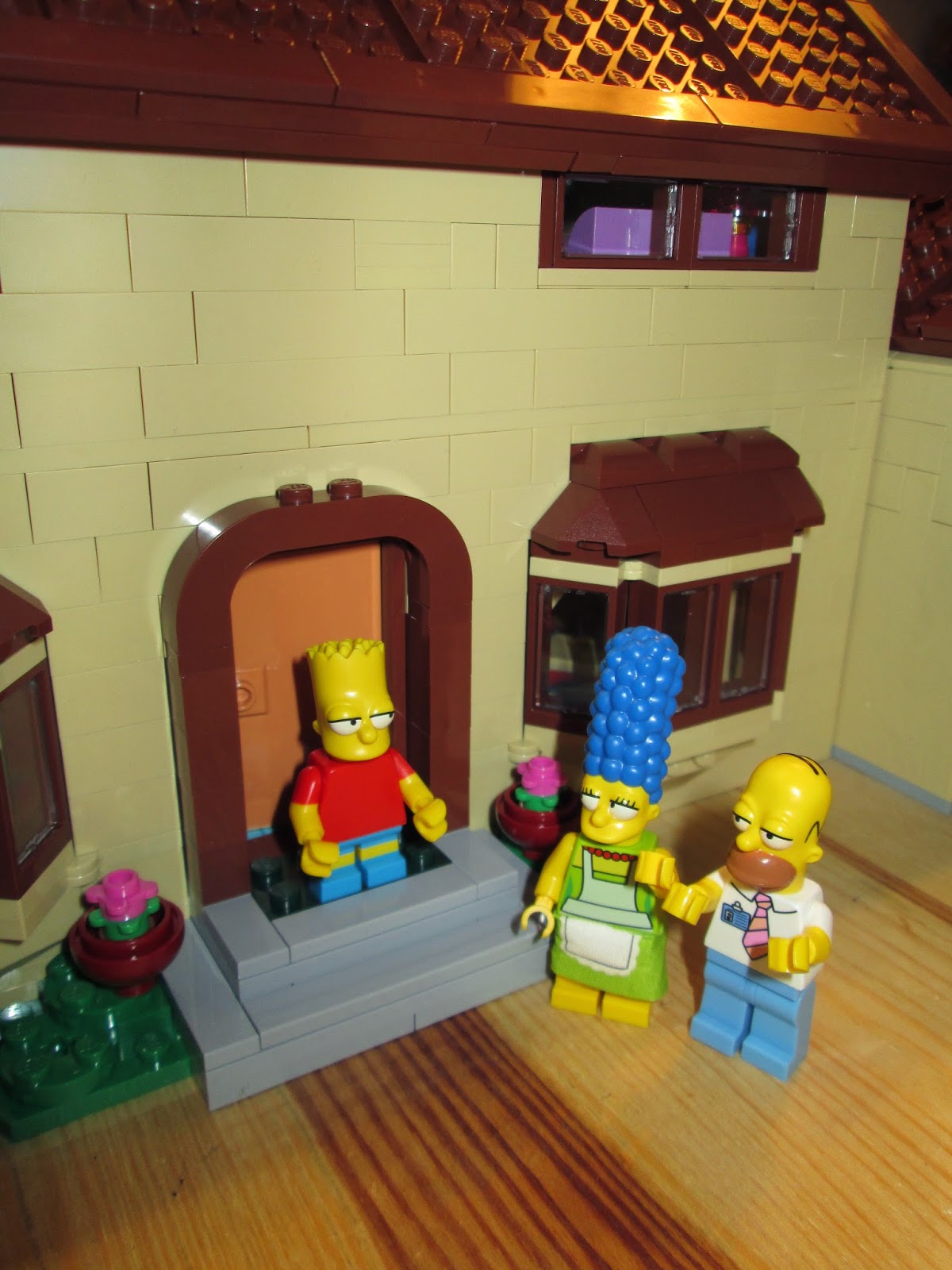 This is the most recent LEGO set I have purchased, and like the Haunted House I featured a long time ago, it opens up to reveal furnished rooms, just like a dolls' house would, So I thought I would add it to my blog. 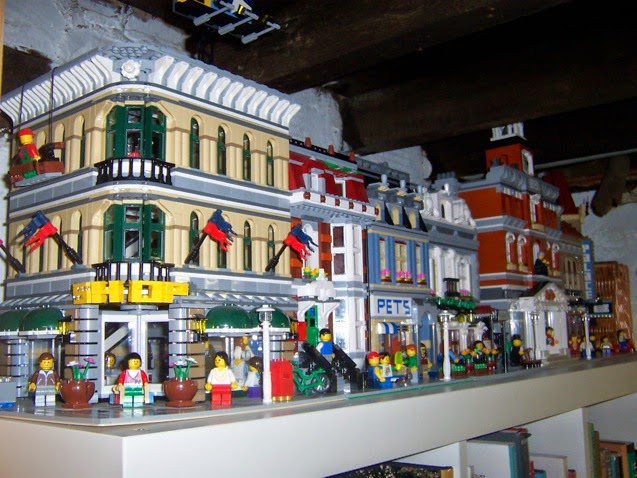 I also got some great buildings for Christmas, and my birthday, which have been added to a department store I have had for some time. When they are clipped together the building create a street scene, and there are lots of lovely details in each building. 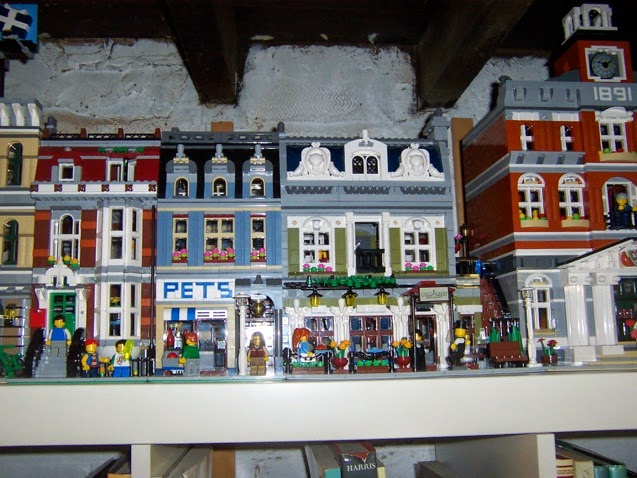 I have put the buildings together on top of some new bookcase I had to buy earlier this year, after my old ones collapsed! (thank heavens for IKEA!) 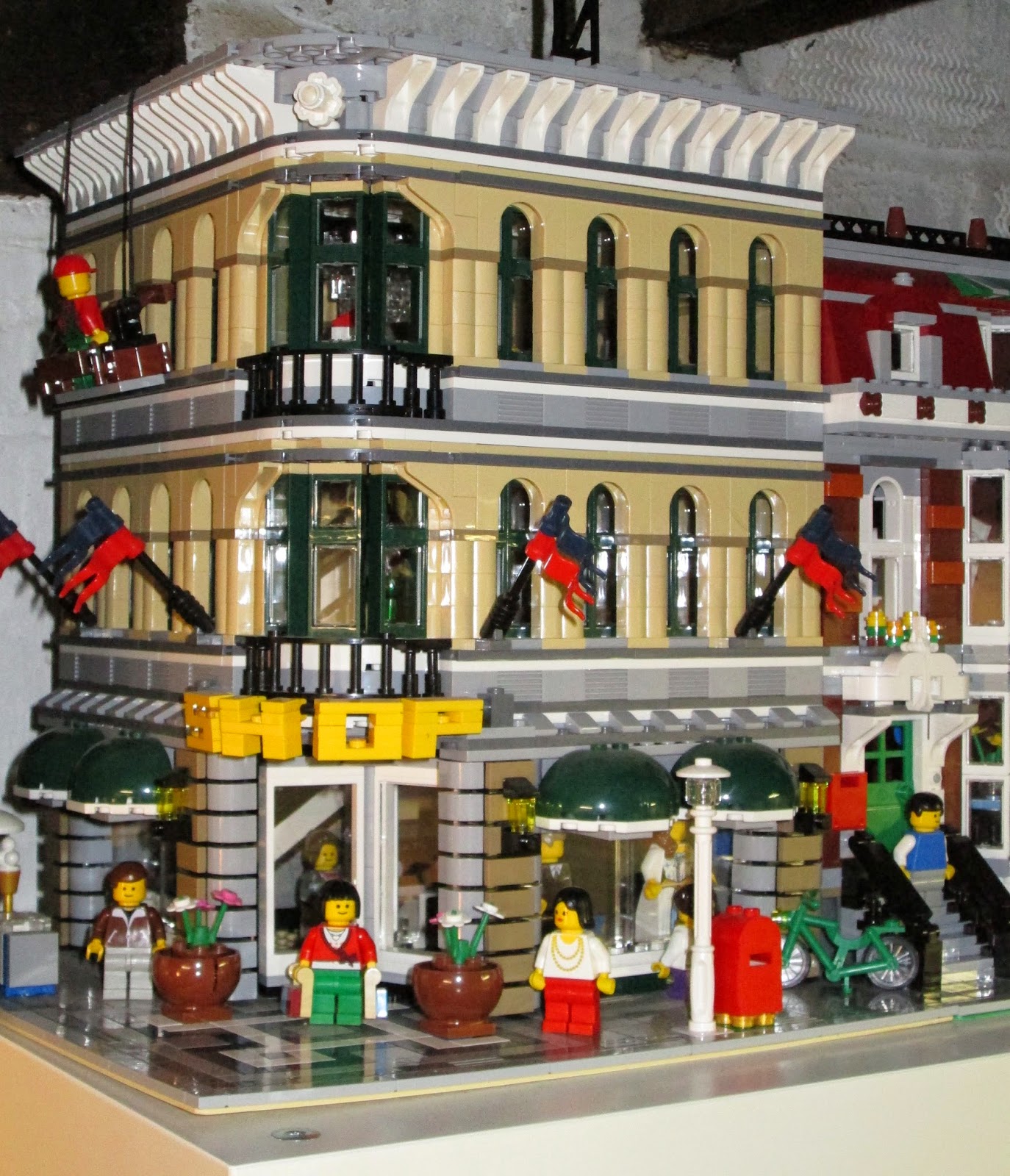 This is the department store that I have had for several years, and some of you have spotted in earlier posts I have done. 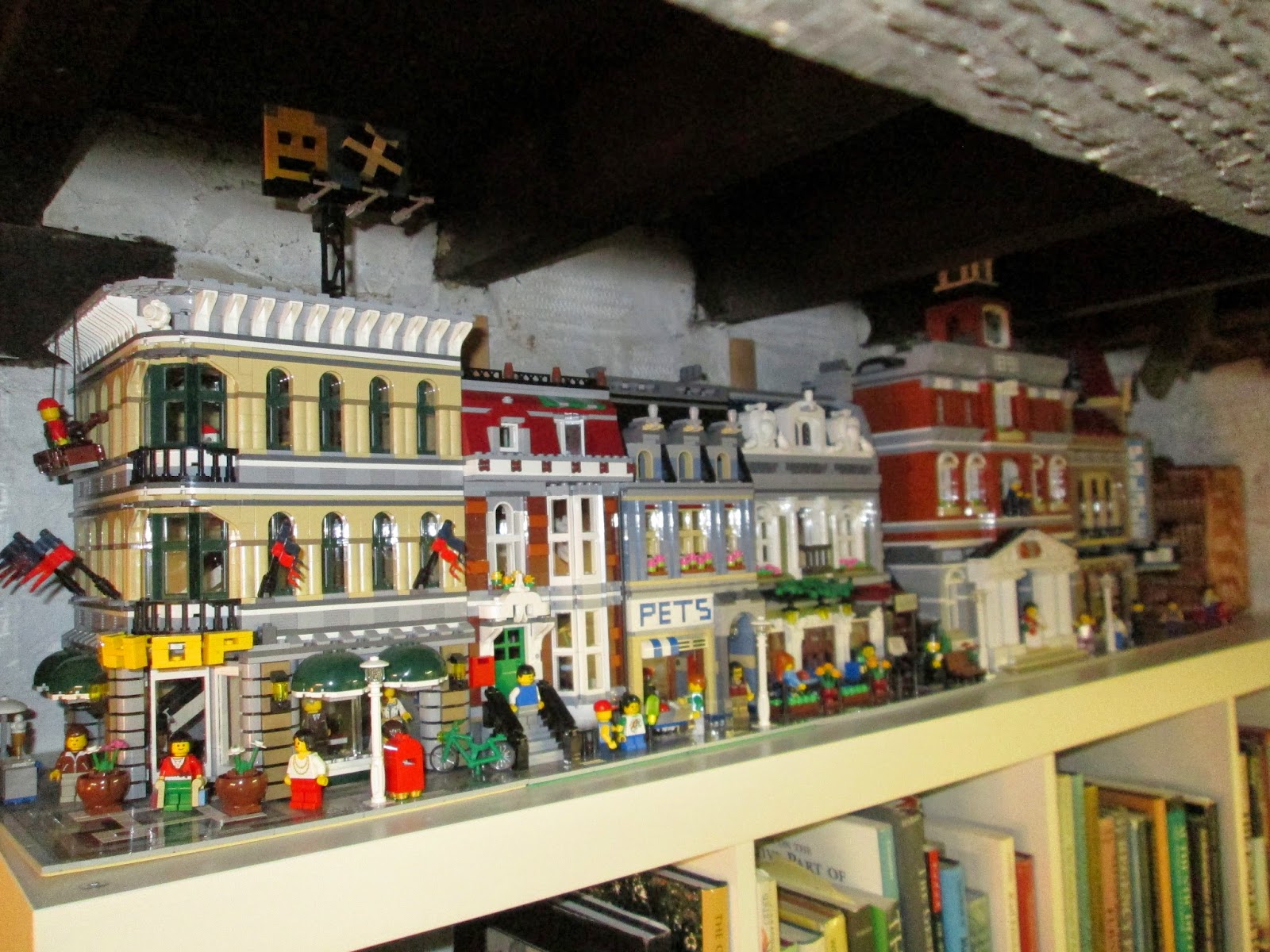 It forms the corner building for the street scene. 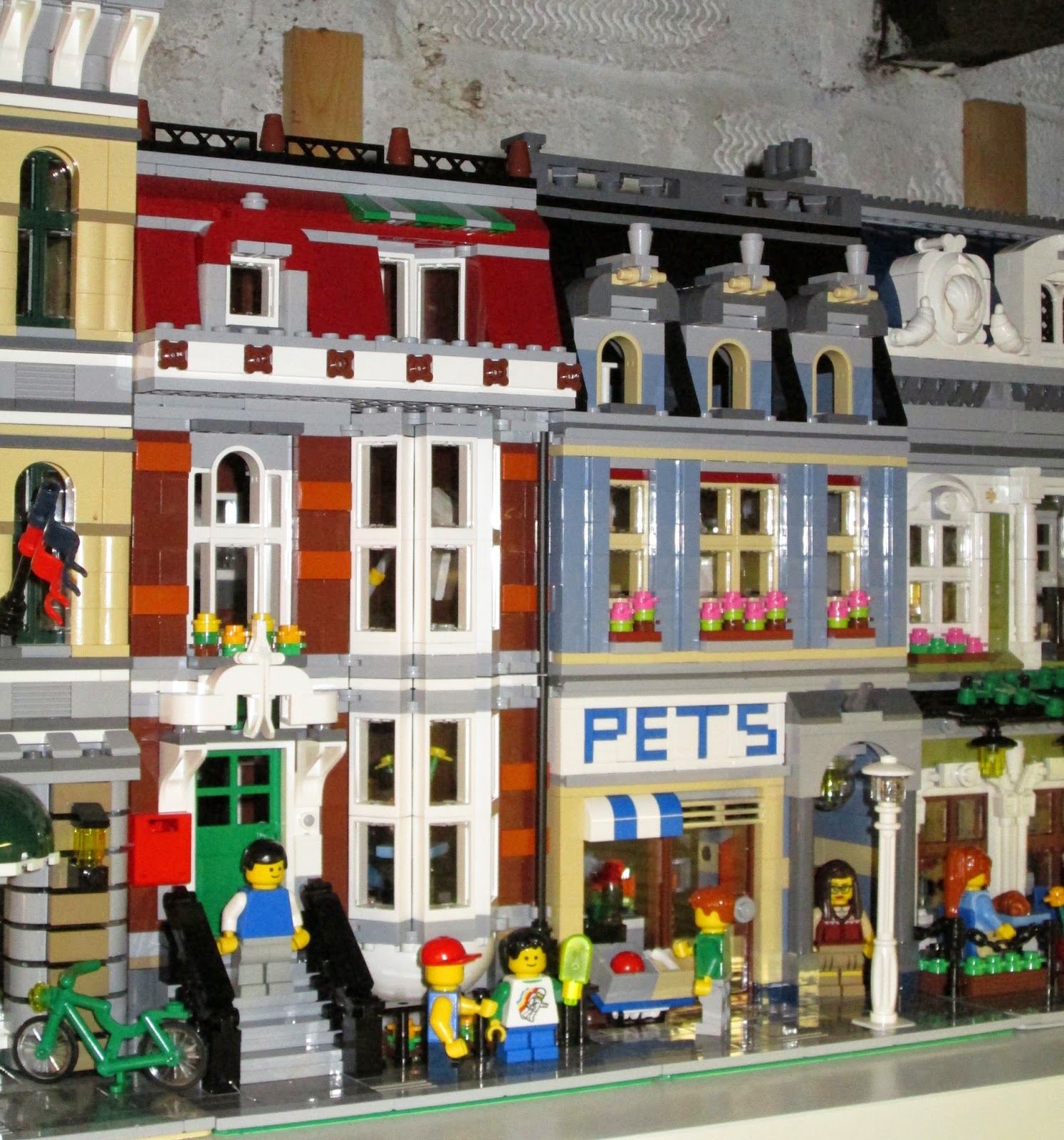 Next was this Brownstone style townhouse and the pet shop. 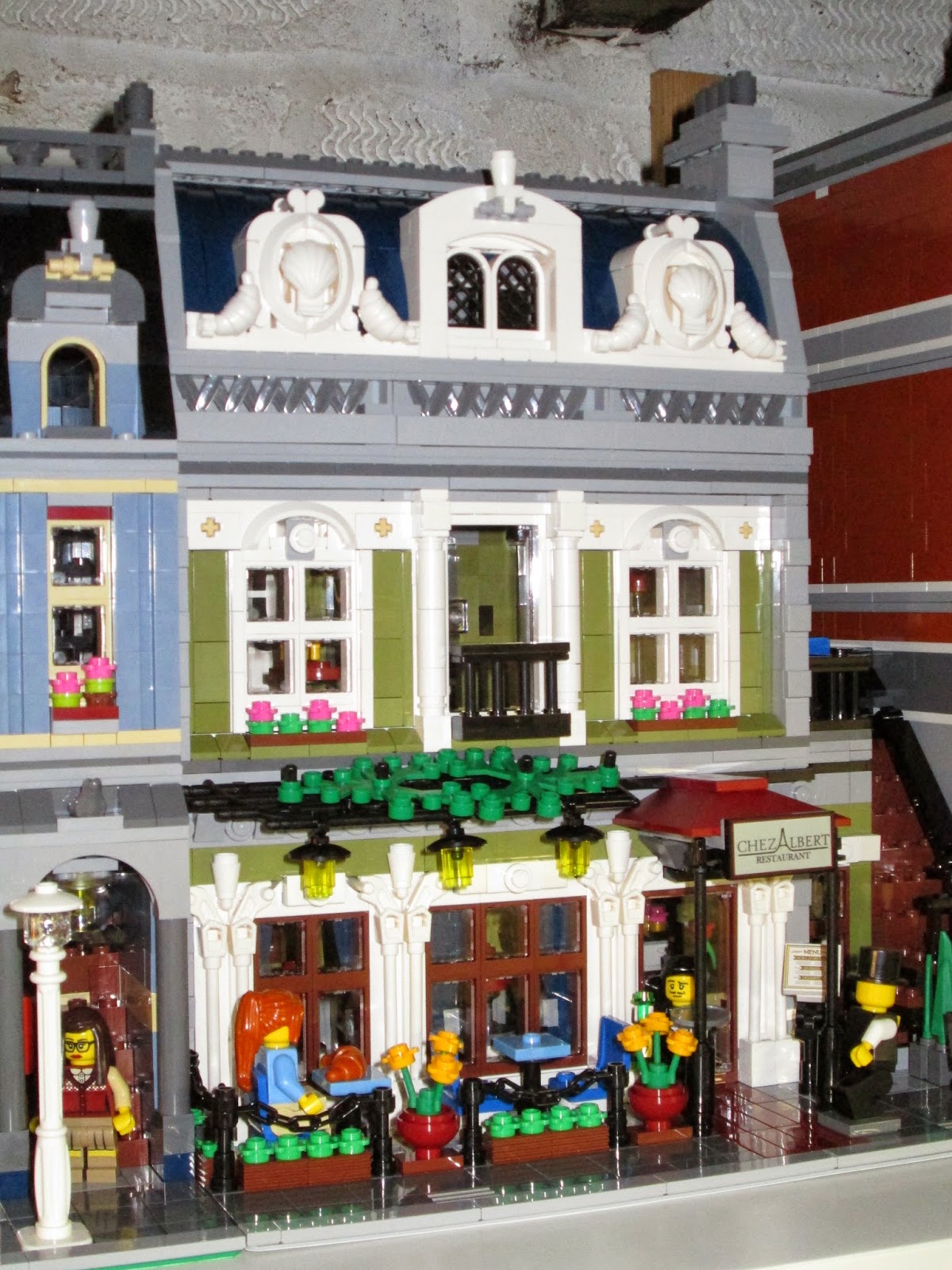 I got the Parisian restaurant for my birthday. I think this is the best of the modular street series that LEGO have produced in the range so far, and is packed with great features and unusual LEGO bricks. 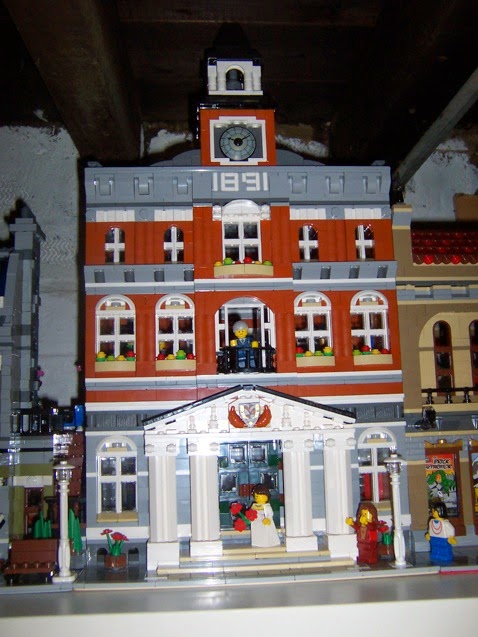 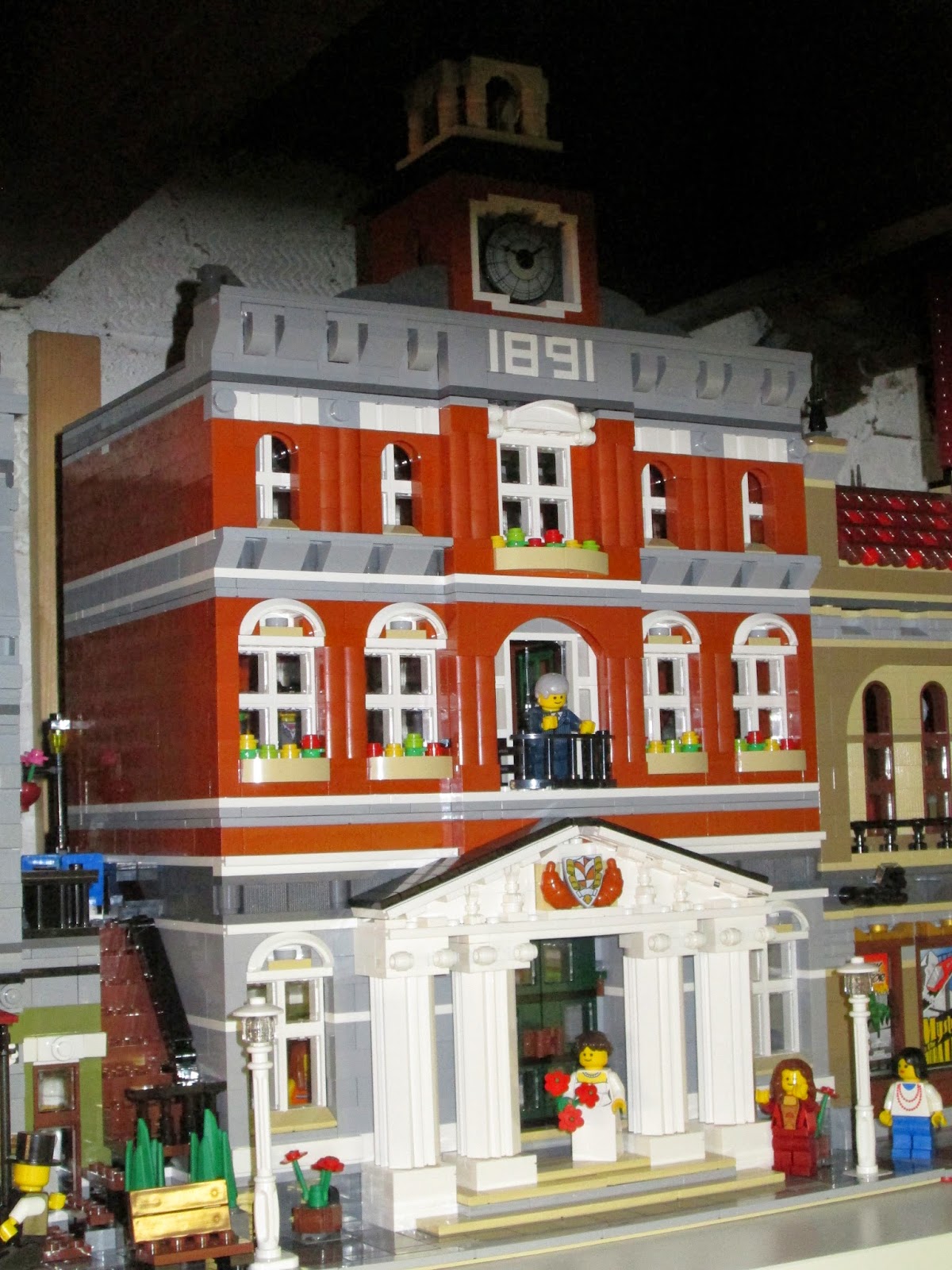 The Town Hall is the tallest building in the series so far (I don't have the whole collection mind you)
It is actually slightly too tall to fit on the shelf, so I had to remove the top most roof tower brick, But as you can see (or rather can't see) it is too dark amongst the roof timbers to be noticed! 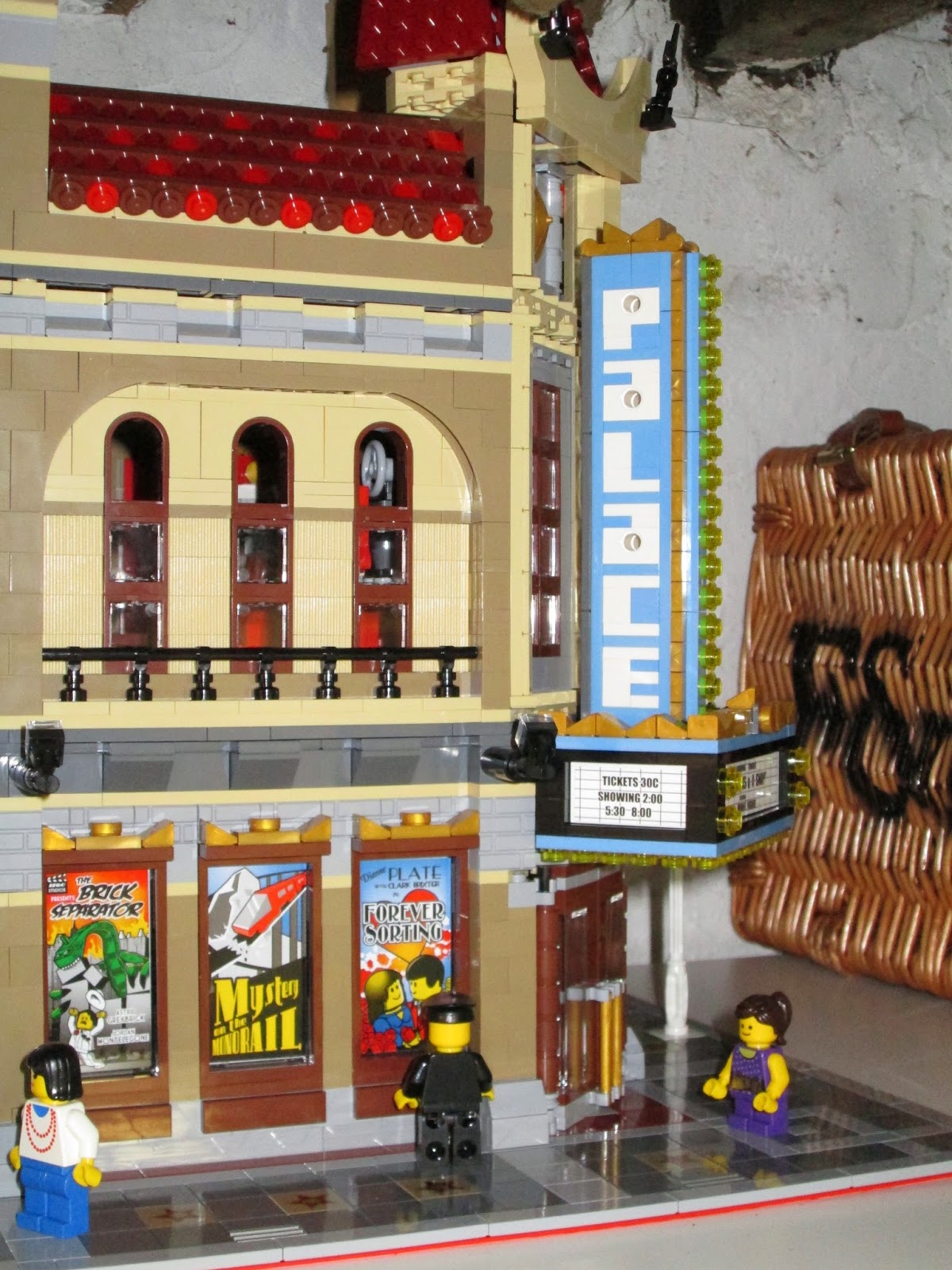 The Palace cinema is the last building in my street scene, and is another corner building. Trouble is, I have now run out of room almost, so I might need to buy more bookcases!! ;o)