The day after we returned from our little holiday, I trekked off to London to visit the Kensington Dolls' House Festival. I went on Saturday, which seems to be the first day of the show now, rather than Friday. It was very busy inside, but there were some great miniatures and some lovely artisans at the show as usual!

I bought several things, and won't show you everything, but I was very excited to finally be able to purchase this Stokesay Ware dinner service. It's the jubilee pattern, which I think was launched last year.  I was torn between this one or the Greek Key design that Stokesay Ware also do.  If my memory is correct (which it may very well not be!!) this pattern is based on a Royal Worcester one from the early 19th century, so fits well with the Regency/Georgian period my house is set in.

I have been looking at the Stokesay Ware china for many years now, since I first started going to the dolls' house shows. I admit that it did cost more than I would usually pay for a miniature, and had to use the Fantastic Plastic to help pay for it, but decided to go for it at last. 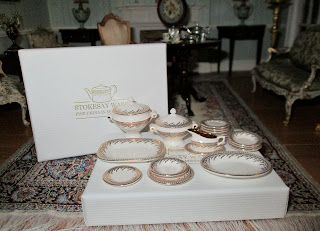 Here it is in all its miniature glory! I did check, and will still be able to add to the set over the next few years if I need to. I bought four place settings, and could get more over time. I love the vegetable dish and soup tureen particularly! 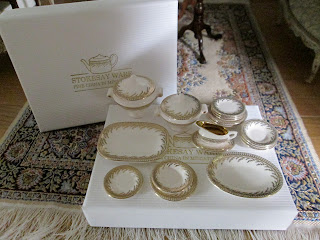 I think this shot gives a clearer image of the pattern on the china. You may have noticed the teapot depicted on the box is in the same pattern, so I think a tea service must also be available. 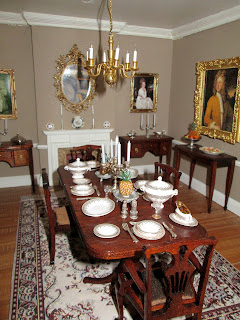 And here is the service laid out on the dining room table (which is crying for a table cloth!) I also gave the silver a little polish as some of it was starting to get very tarnished, but think I need to silver jewellery dip rather than the silver cloth I have, as I can't clean all the fine details. (you might also notice the hand painted plate I bought at Miniatura has found a home on the mantle shelf of the fireplace, replacing a Victoria Fasken one).

Do you remember my quandary over the Bonheur-du-Jour a few weeks ago? Gee very sensibly suggested that I do not pass judgement upon it until it has been bought to life a little with some suitable accessories. Well, taking his advice, and my own HOTlist (thanks John!! x) I looked out for some things to dress the bonheur with... 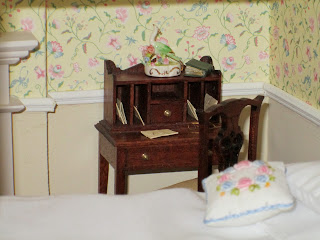 And here is the result! The beautiful bird is by Veronique Cornish and fits in with the other bird ornaments in the room by the same artist. The letters are copies of genuine ones complete with wax seals (before envelopes were invented!), Made by Ellie de Lacy, a STEAL at £2.50 a pack, I bought two packs of assorted letters and used them to fill the bonheur and the bureau bookcase in the parlour.
The little leather-bound book is also by Ellie de Lacy, and is actually a 1/24th scale book, but I thought it was just right for the bonheur. I also found a tiny pair of spectacles (just about visible behind the chair) from Truly Scrumptious. 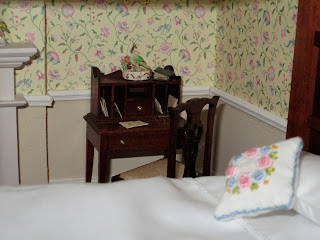 Here's another shot. I am very happy with the result, and think the bonheur works better in the room now it is dressed, though I would still like one or two more things for it, an ink well and quill maybe, I have some keys I might use too, but all in good time! Thank you for the advice Gee! 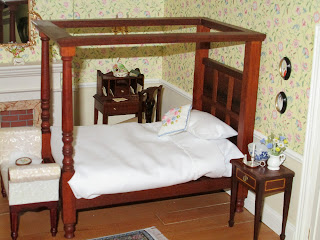 And here is another shot showing more of the bedroom. Fi will be thrilled to know that I am now planning to start work on the bed covers and curtains (ONCE I HAVE FOUND A PRETTY PLEATER - which seem to be as rare as hen's teeth in the UK!).

Meanwhile, at the Swan Inn... 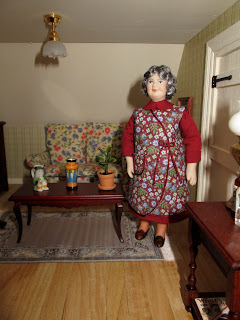 For a long time I have been thinking of getting a wife for the pub landlord, why not? everybody needs somebody to love as Queen once said (or sang!). Well, I had a bit of trouble finding a female doll that fitted the period and had the right look (this from someone who wasn't ever going to have dolls in his houses!!). Mid 20th century dolls are actually quite hard to get hold of, there tend to be mostly Victorian, Georgian and Elizabethan dolls about. However, after looking out for a suitable wife at several shows to no avail, I finally found one I liked! It is by Woodside Dolls, who made all the other pub dolls. I love her floral house-coat, but what I liked most about her was that she looks quite a bit like my own mother (a psychologist would probably have a field day after that little confession LOL!!). 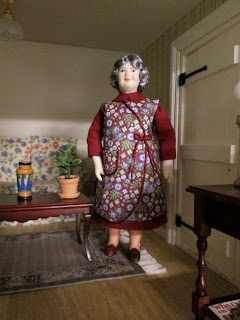 I am going to call her Jennifer in honour of my mother. She looks a little plump on all the traditional British food (she loves her cottage pie, cheese scones and trifle, and she makes a great roast dinner!!) but is quite healthy with all the fresh country air about her. Trouble is, I can't remember what name I gave her husband downstairs behind the bar! (He certainly isn't going to be called Thomas, Mum! I'm not letting you make that mistake again!!)

Well, there you have it! I did buy a few other bits and pieces, and I might do another post on those sometime, but these were my main purchases.