Meanwhile, back in the Georgian House...

Can it really be over a fortnight since my last post?! Time rushes on, I have been rather busy with real life things, so the mini world has been put on hold for a while. I will get back to it again in the next day or so.

Meanwhile, I thought I would show you some new photos I took recently of my Georgian House. Some rooms have not really changed much since I last posted about them, but there are some that have new pieces of furniture and accessories that I purchased at the Kensington Dolls' House Festival back in May.

I'll just show a couple of rooms today, and do another post of more rooms soon. 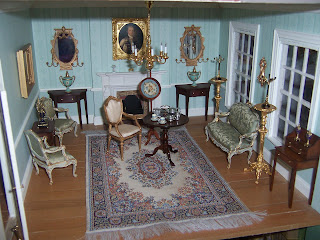 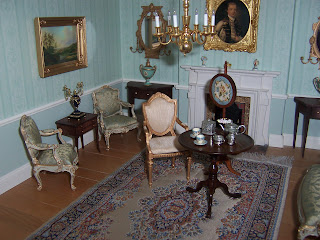 I couldn't resist buying myself some John Hodgson chairs to match the sofa I bought a few years ago. I have wanted to buy some for ages, but they are quite expensive, and there were always other things I needed more. This year I bit the bullet! Originally they were going to go on the rug, next to the table, but for some reason didn't look right, so I kept the gold chair, and put the other chairs against the wall where I had had some Hepplewhite style shield-back chairs.

You'll notice the shevret from an earlier post in situ on the top photo too. I wanted a small desk for that corner of the room, and was pleased that Trevor's shevret fitted in so well. I also bought several nice accessories from David Iriarte, like the candle sticks and the little urns on the shevret, which can also be used as candle sticks when you rotate the lids! 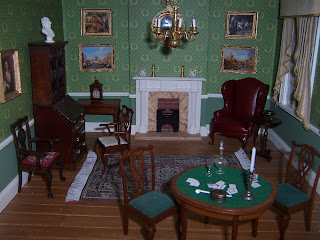 For some reason it is hard to get a clear bright image of the parlour on camera. You have probably seen this room much as it stands in earlier posts. The lovely chair from Elga stands proudly next to the book case, other than that there isn't a great deal more to tell you about this room that I haven't mentioned before, but hopefully it is a little brighter than some older pictures, and you can see more detail.. 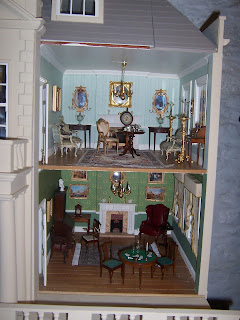 And a new shot of the two rooms together. My next job is to work on curtains for the house, I'm still not sure whether to use a Pretty Pleater or go with knitting needles and pins, I want some Austrian style blinds in the bedroom anyway, so will probably have to get out needle and thread (YIKES!!).